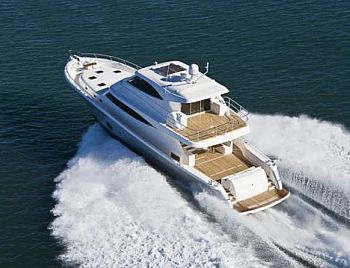 The Maritimo 73 is not a puffed up version of a smaller hull but a brand-new boat: new hull, new everything. The 73 is the biggest boat that Bill Barry-Cotter, Maritimo’s founder, has ever built. With a range that will get you from Sydney to Cairns, top-notch build quality and a focus on comfort, the Maritimo 73 is an excellent choice for anyone intent on long-range cruising.

You board via the large duckboard into the 17.7sqm cockpit. This is a massive entertaining space that would make an inner-city apartment-owner jealous. There’s a barbecue and a cool box big enough to hold a stack of reef fish or four or five cartons of beer.

There is also a handy sink and two large storage hatches for ropes, snorkel and flippers, fishing tackle or other water toys. The aft transom lounge has space for two sun-lovers to bake lying down, or four to five if seated. The test boat had a table setting where six adults can sit comfortably and eat al fresco. The table has grab rails and a hatch behind it.

Underneath the cockpit is an equally massive tender garage big enough to house a 3.5m tender with a 30hp Evinrude outboard. There’s an electric crane to launch the tender. Maritimo’s attention to detail is evident throughout the boat, in little things such as the removable board that lives in a starboard cockpit hatch.

The board is used to cover the steel slider rail beneath the doors dividing the cockpit from the saloon, when the doors are open. It means that bare feet don’t have to stand on the rail. It’s a little thing and not at all necessary, but it’s typical of the tone consistent throughout the entire boat: it’s all about comfort.

Inside, the saloon has a dining setting for six to eight adults. There is a canvas cover to save the carpet on occasions that involve either dirty or many feet. Meals are prepared in the step-down galley to starboard. It features a pull-out pantry, two fridges, two freezers, Corian counter tops, a four-burner stove, large convection/microwave combo, dishwasher and a thirsty-size wine locker. There is ample storage for provisions, kitchenware, crockery and cutlery.

Additional storage for crockery and lots of glasses is found forward of the galley, under the stairs leading to the flybridge. This storage unit also houses a Sony Bravia 40in television with DVD and Bose surround sound.

The saloon is fully air-conditioned and offers 360° visibility thanks to large windows and the glass sliding doors to the cockpit. Views can be enjoyed from a stylish leather Natuzzi suite selected by the owner. The dark wood coffee table is a nice touch.

Sleeping quarters are accessed from a small stairway forward of the saloon. There is a single guest cabin to starboard. It has a cupboard big enough for two people to stand in. The porthole opens for fresh air and the deck hatch has retractable shade and fly screens. The laundry is forward of this cabin.

The amidships VIP guest cabin is accessed on the portside. It has a massive storage pit that you step down into. It even has drawers. The island queen-size bed is the centrepiece faced by a television. It has an ensuite big enough to walk around in, bathed in natural light from a porthole and a deck hatch. There is a shower, toilet and vanity.The day head is forward and to starboard. It doubles as an ensuite for the forward cabin. The forward cabin has a queen-size island bed. There is heaps of storage and deck hatch for fresh air and natural light.

The below-deck master cabin has a king-size island bed with storage underneath. There are his and hers wardrobes, a desk and television. The ensuite is an interesting set-up and an example of the thought that went into the design throughout the boat. It spans from port to starboard, with his and hers toilets—one on either side—and a sink each side also. The shower is dead centre, accessible from both sides.

The flybridge is 38ft long and has all the luxuries you would expect of that space. There is a three-seat helm station, which overlooks large screens displaying radar, GPS, engine systems and depth sounder information. This set-up is the owner’s choice. The helm station was designed for skippers by Ross Willaton, Maritimo’s sea-trial skipper. The large windows provide 360° visibility.

The flybridge is carpeted. There are two lounges, a bathroom, fridge and icemaker, liquor cabinet, storage for glasses, more general storage and a pop-up television. The large sunroof is an excellent idea,adding sounds and smells to whichever view you choose. The flybridge has its own aft deck with docking controls on both sides and a large space to lean on the rail and enjoy watching the sun sink into a tropical bay.

We took the big Maritimo for a spin out front of the Gold Coast. The twin 1550hp Caterpillar C32s cruised nicely on 1700rpm for 23 knots, burning 150 l/h with the port engine and 145 with the starboard engine. According to Maritimo, if you stick to a laid-back troll of nine or 10 knots, the range of the vessel is approximately 1,500 nautical miles.

During our test drive, the 73 did its thing in the sloppy chop. It was easy to steer and performed even more impressively when Aaron, our skipper for the day, took back the wheel to show how well the big hull cuts into a turn under power in hands familiar with her.

The minimal roll reduced even more once we pushed to 2000rpm and 30 knots. Even at this speed, the engine noise remained unnoticed during conversation. Other features include a 130l/h water-maker, twin gen-sets, a comprehensive shore-power system and single and three-phase power. In the spacious engine room, there’s a big Kingcrome tool box and work bench, a gurney and an automated fire system.

The sidewalks are so wide, you could ride a bicycle around the boat. At the bow, you notice a very clever table setting on the nose. It has a handsome polished timber table, which is bound to be a hit with the ladies during cocktails at anchor.

There are two anchors. The electric has 80m of chain, while the hydraulic has 100m of chain. There are foot controls and controls at the flybridge for these. The chain hatches are massive.

Once at anchor, the big 73 can put on an impressive show with something like 160 LED lights throughout the boat.  These are just some of the bright ideas that make this Maritimo deserving of the title of ‘flagship’ for this great Aussie boat-building house.