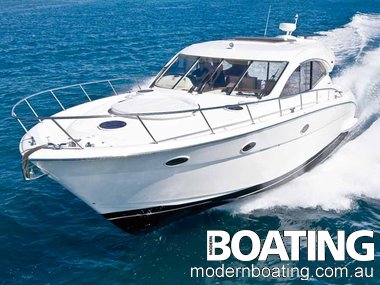 A powerboat-racing heritage lies beneath the sleek exterior.

If the Maritimo C55 Sports Cabriolet were a beast, it would be a velociraptor, that swift stalker that feasted on hapless scientists in the movie Jurassic Park. I thought of the creature the moment I laid eyes on the test C55 as she lay at dock next to Maritimo’s yard on the Gold Coast. The boat’s long, ovaloid windows sweeping towards the stern reminded me of the raptor’s eyes, her reverse sheer bow of its scientist-munching beak.

Even the overhang of the roof over the aft deck looks sharp, like a bird of prey’s crest.

A favourite euphemism among boating writers for sleek and gorgeous is ‘European’. That term, which has an insecure ring of the cultural cringe to it, has in my view been flogged to death. Time to bury it. There are dreamboats coming out of many of the world’s yards now, not just those in Italy and France. And it’s not like Europeans haven’t produced their share of dogs.

The Australian-built, sleek and gorgeous C55 is pretty enough to turn heads in Sydney Harbour, that show pony hippodrome; and it’s gutsy enough to ride the seas that pound our shores.

THE BELLY OF THE BEAST
The C55’s saloon is on two levels. The aft section, where the galley and bar are located, is level with the stern deck, while the helm station and dining area are raised about a foot above it. The raised area gives more headroom for the master stateroom, located beneath it, as well as good vision to the helmsman and his guests sitting at the table.

The galley on the test boat had all the goodies you’d expect of a boat in this price bracket two-door fridge and freezer, ice-maker, microwave, drawer-type dishwasher and so on. There’s also a drinks fridge and wine racks, which are now pretty much standard on every big luxury boat in the world except for those being built for Middle Eastern clients and even some of those have cabinets that don’t look like they’re made to store teapots.

It’s all topnotch, but not unusual on boats this size and price. What really stood out in the C55’s saloon were the sunroof and the access to the stern deck. The mid-November day I went out on the C55 off the Gold Coast started out overcast, so the sunroof made the saloon brighter than it otherwise would have been. Then the clouds cleared prompting Geoff Middleton, Maritimo’s PR manager, to press a button and slide a sunshade across the sunroof, protecting us from the heat.

The other thing I liked was the way the sliding glass doors opened onto the aft deck. It creates one large indoor/outdoor space that suits the warmer parts of Australia, where you want to sit outside and enjoy the heat, but step in every now and then to relax in the shade. Plus, the way the C55 has been designed means that you don’t get the ‘station wagon’ effect when you’re running with the back doors open; the fumes from the exhausts don’t eddy back into the boat.

I saw this for myself during the test, when we ran the boat with the back doors open. There was no suck-back at all. The two 670hp Cumminses did make a bit of a rumble but weren’t so loud that we couldn’t speak at a normal conversation volume. It got much quieter when we shut the back doors, of course. And that’s when I discovered an added benefit of the sunroof: if you want to close the back doors when you’re underway to keep the sound out, but like me prefer fresh air to air conditioning, you can open the sunroof for the smell of the ocean and no rumble.

Below, the C55 sleeps eight. The queen-sized bed in the main stateroom is set athwartships rather than fore and aft, and there’s a window in the hull over the top of the bed when you wake up, you get the light reflected off the water streaming over the top of your head. Very nice. The stateroom has its own bathroom, of course, set to port.

There are two more cabins below, both with bunkbeds. As in the saloon, everything is finished to a high standard.

EFFICIENT EYE-OPENER
Veteran powerboat racer Ross Willarton skippered our test boat. ‘Rossco’ knows a thing or two about powerboat performance. But what most excited him about the C55, he told me, was her fuel efficiency even with a conventional drive system, she delivers great figures. “One American dealer did a comparison test between their boat, which had a different type of drive system, and the Maritimo”, said Rossco, “and our boat delivered better fuel figures.

“It was a real eye-opener for the Americans, who like the most horsepower available.” That’s due for the most part to the slippery hull design, according to Rossco. “It’s a variable deadrise hull that flattens out at the back,” he said “It doesn’t need much power to get going.”

The C55’s other noteworthy underwater feature is her long keel. The keel keeps her on track, even when you’re steering on one engine. “Not many boats steer on one engine when they’re going slow”, explained Middleton. “Normally, if you have the port engine in gear on a twin engine boat, it wants to go off to starboard. But on the C55, thanks to the long keel, it’ll turn against the engine. That means that if you lose an engine, you can come in on one engine and still steer the boat, and even dock it.”

Middleton and Rossco were keen to show us how the C55 doesn’t have much of a hump to lift over when she comes onto the plane. “You’ll see a little bit of lift in the bow,” said Rossco as he started pushing down the throttle, “but these new hulls work at any speed.”

Sure enough, the C55 got up on the plane with very little effort, even in the biggish seas running off the Coast the day of the test.  Maritimo put the C55’s 3600L fuel tank amidships at the pivot point. That means it’s not weighing down the stern with tons of fuel, which in turn means the boat gets onto the plane more quickly.

That’s very handy when conditions force you to keep the speed down and Australian waters get big seas. “Say you’re going from Newcastle and Sydney and the sea dictates you should be at 14 knots,” said Rossco. “Well, a boat that needs 15 knots to get on the plane is very hard to drive. One minute it’s off the plane the next minute it’s on the plane. With the C55, you just pick a speed that suits the sea and just drive it.”

Rossco put it up on the plane with no tabs to demonstrate what he means. In no time, we were gliding down the side of waves, the boat planing comfortably, doing 26 knots with barely a 70 percent load on the engines.

MASTER OF THE BEAST
The C55 suits a variety of owners. With its four cabins, it’s perfect for families. With its single-deck set-up, it’s a great boat for entertaining. You don’t have dad stuck up top while mum’s down below cooking. And with its big tank and fuel efficiency, it’s a good traveller, too.

You can spend summer in Pittwater, then cruise up to the Whitsundays for winter without having to stop five times to refuel. It’s quick and it looks good. And it’s so easy to handle, you don’t need a crew.