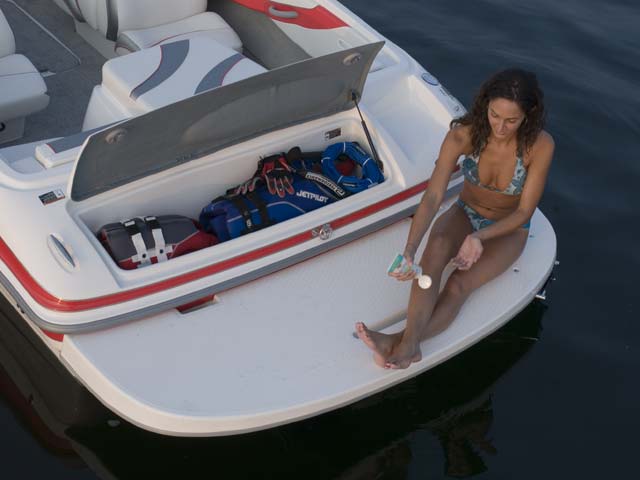 The contemporary curvy lines of the two new Maxum sports boats sitting at the marina were quite a contrast to the bushfire devastation I’d witnessed driving down to the Berowra Waters Marina, north of Sydney.

We have been trying to tee up this test around Christmas when I got the call from Greg Wright, General Manager Berowra Waters Marina, that went along the lines of ‘perhaps we should delay the test … we’ve got a few more important things to worry about at the moment.’ He was right.

The fires had encircled the area and come down the escarpment. They made it right down to the shores of Berowra Waters on both sides of the creek. And amazingly, nothing was lost, but jeez it was close. So, this time my drive down the long windy road towards the Berowra Car Ferry was not the usual through forest drive towards a waterside sanctuary.

Instead, it was through a charred landscape, typifying the consequences of our long hot drought and fire-ridden summer. But for me, boating is the best remedy for a long hot summer and a day out with a choice of two fast 18 and 19 foot Maxums was a sweet pill to swallow.

Both rigs were great performers with plenty of power coming from MerCruiser engines driving through Bravo I sterndrives. The 1900SR was fitted with a hefty 260hp V8 MerCruiser, which gave her a top GPS speed of around 48 knots.

The lighter 1800SR hull was powered by the smaller 220hp V6 MerCruiser ‘ the overall package coming in around 130kg less than the 1900SR ‘ but this boat still delivered a similar top speed in the glassy morning conditions.

On paper both rigs had similar performance figures. For example, at 3000rpm both hulls travelled along doing 27 knots, while at 4000rpm they hit 37 knots. Flat stick the engine’s rev limiters kicked in holding both boat’s top speeds back a fraction. But I reckon with an inch more prop pitch, they both could have hit 50 plus knots.

In reality, both rigs had slightly different characteristics. For example, I often look for a speed that you would drop back to and cruise at, after giving the boat a bit of stick, in other words a ‘natural cruise speed’. This speed was 28 knots at 3300rpm in the 19 footer, compared to 22 knots at 2500rpm for the 1800SR.

The longer 1900SR was more balanced and generally didn’t porpoise at any speeds, but the hull’s weight meant that a bit of over trim got the prop cavitating, so we had to be careful not to jack the leg out so far. The 1900 was exciting to drive and held a good line in the turns. I would have loved to see how a bit more pitch and cup on the prop would improve top-end performance, because the cup would allow the leg to be trimmed out a bit more.

At one stage the GPS showed 52.5 knots, which could be consistently obtainable with the right prop. This same prop discussion also applied to the lighter 1800SR, because the rev limiter also held her back. But even with the rev limiter restrainting the top speeds, they were still exhilarating and the hulls enjoyed being wound out.

Both hulls had crisp handling, although the shorter rig needed more attention to trim in order to balance out the moderate porpoising. This emerged at various speeds driving solo; however, with a passenger in the bow seats the 18ft hull became quite balanced. The drive positions were comfortable with the ‘seat down’ position being my favourite for high speed driving.

The seats also adjust to an elevated position allowing the driver to look over the windscreen, but when set to this position I felt a little precarious, especially in tight turns at speed. I reckon many owners would find the ‘seat up’ driving position best for cruising and pottering around.

There was an impressive array of instrumentation on the dash including oil; temp; speed; depth sounder (19 footer only); tacho; fuel; volts; lights; and horn. On the port side of both boats there was a self-draining storage ‘ great for drinks ‘ and a glove box with a rather flimsy lid.

The layout of both rigs was similar, but different. Both boats were bowriders with the 1900SR rated for eight passengers and the 1800SR rated for seven. There was a choice of comfortable seats with easily accessible grab handles for passenger security.

The standard rigs have two collapsible sun lounger seats, but on both test craft the helm seats
were replaced with buckets and bolsters. The larger 1900SR had marginally more storage, especially in the bow section, where there were small glove boxes located beneath the indscreen.

It also had courtesy lights in the side storage areas. The 1900SR had a ventilated underfloor storage compartment large enough for skis and wakeboards. The aft seats converted to a sun lounge on both boats only the conversion seemed a little easier on the 19ft boat.

Access to the engine was a snitch on both craft. It was simple to completely remove the engine hatch on the 1800, which provided lots of access when working on the engine. Both hulls are available in red, yellow, or blue with various power options. They all come standard with swim ladders, adjustable steering wheels, a plethora of drink holders, CD Players with waterproof speakers, dash mounted 12V accessory outlets, carry on cooler with dedicated storage area, engine bay blower, bilge pumps and a battery isolator switch.

Overall, I can’t decide which boat I would prefer. I guess the bigger the better, but the V8 would be more expensive to run. The Maxum 1800SR bowrider as tested cost $51,990 with the 4.3 MPI including trailer and onwater costs. The 1900SR ready to go will set you back $59,990 with the 5lt V8 MPI engine. You may as well simply toss a coin, for whatever the result, you will be on a winner with either of these new 2003 Maxum sports craft.