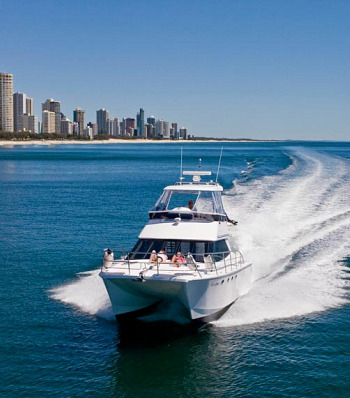 This Aussie power cat is fresh out of the factory and already making waves.

Two hulls means plenty of space—the Montebello has enough for two double-berth cabins, a twin single plus a bathroom with a full-sized and separate shower.

“Montebello Yachts – Top of the Mountain”

A group of Gold Coast businessmen have not let the downturn in the boatbuilding industry dampen their passion to build a world-class offshore cruiser.

These gloom busters—headed by industry identity Gary Zamparutti—have got together to form Montebello Yachts.  Based out of Horizon Shores, the group has just launched a brand new 12.5m power catamaran.

Why the unusual name?

“We threw a few names around and that one just came up”, said Gary. “People seemed to like it, so we decided to use it.”

In Italian, ‘montebello’ means ‘beautiful mountain’, so there may be some connection given Gary’s lineage.

This may be the first boat out of the factory but it comes with an already established pedigree.  The design comes from the drawing board of new Zealand naval architect, Roger Hill, a multihull specialist who has been drawing boats for some 32 years.

Hill already has a 12.6m planing cat design on the water in the United States and has used many of his original design ideas from this boat in the slightly smaller Montebello.

For starters, seen in profile it is not obvious at first that this is a multihull boat.  It doesn’t have those chunky topsides many power cats have, and with the lines of the fine bow(s) and the swept-back hardtop on the flybridge, it could easily be mistaken for a fast monohull—until it turns bow on and reveals its true identity.

The boat was built for an owner who wants to use it to fish offshore with his mates, so it’s a bit ‘blokey’. but that doesn’t mean quality has been sacrificed.  The striking first impression of the boat is the excellent workmanship and the attention to detail that has gone into the build.  And just like the major manufacturers have shown they can produce world-class quality boats in Australia, a smaller manufacturer is up there with them—and at a price which makes it more than competitive with imported brands.

Little things, not obvious at first, indicate that this boat has been put together well.  Such as the dome nuts on the ends of the bolts securing the flybridge windscreen, the slots in the screws all aligned fore and aft, and the durable amtico floor in the saloon that has been slotted with brown inserts to resemble traditional teak and holly.

The stainless steel welding joints, which have been ground and faired, is some of the best stainless steel work I have seen on a boat and the one-piece bow and side rails is the work of Ray Jansen at Horizon Shores.

The hull, 25mm thick at the bottom and 20mm topsides, is built with composite technology similar to that used in ocean racing yachts.  The hull, bulkheads and furniture are all foam composite construction—hand laid using vinylester resins.  Infusion technology is used on the decks.  This makes for a very strong and light boat that displaces just 11,000kg.

Gary told me that the boat has been put together with 99 separate moulds and that includes the doors and cupboards.  I noticed that the deck non-slip mould was a new design; the nodules are bigger than normal and feel very positive underfoot, especially when wet.

The big advantage of a catamaran is its big deck space, the big disadvantage is most won’t fit into a standard marina pen. This boat, with its 4.5m beam, has a lot more deck space than a similar-sized monohull but is not so big that it won’t fit into a standard pen.  And try finding a cockpit as big on a monohull the same size.  It’s one big entertaining area.  On a ‘blokes’ day out, half a dozen mates could fish from it without getting tangled up.

A lot of innovation has gone into the Montebello.  A folding table and chairs are stored in side lockers, and the barbecue pulls up from the centre transom island.  Set the table and chairs up; fire up the barbie and get set for a relaxing day in an anchorage somewhere.  And it’s easy to get close into the beach with the 1.03m draft.

The solid cabin door opens right up to give seamless access from the cockpit to the saloon.  The galley, with a four-burner stove and a couple of large fridges, is aft with a high-top counter with the dinette opposite.  Instead of being the traditional U-shape, the seating is curved and the table shaped to match.  The finish, as with the rest of the boat, is top drawer.   There is not a sign of bare fibreglass or gelcoat anywhere.  The whole cabin is lined with a cream vinyl and trimmed with PNG rosewood.  Although the boat is air-conditioned, the front windscreen window can be opened to provide through-flow ventilation in the saloon at anchor.

The only time the aircon might be needed is in the sleeping cabins in the hulls.  Remember that this boat is only 12.5m long but Roger Hill has managed to design in two double berth cabins and a cabin with two singles as well as a head with a separate, full head-room, shower.

All this and there is still the flybridge.  The helm station is centred with an inhouse-designed captain’s seat and lounge seating either side.  The owner has opted for the full Simrad NX40 package, which also includes an 18-nautical-mile range radar and a camera, so the driver can see the back deck.  The console has been set up gameboat style with the control levers either side of the wheel, but with the 2.9m Swift tender and its launching crane sitting on the back of the flybridge, it’s impossible to see into the cockpit.  The camera is handy when the crew has a hook-up, or when docking stern in.  The sporty steering wheel with two-and-a-half turns lock-to-lock sets it off.

Montebello has solved the problem of rainwater collecting on the big cantilever awning over the cockpit.  As it slopes downwards, small pumps have been installed either side to pump any water collected up to the internal drain pipes installed in the superstructure, so nothing drips into the cockpit.  The system works well and is out of the way.  Gary is very proud of it.

On the day of the test, the sea was like a millpond off Surfers.  I didn’t get to try the boat in the usual swell we get off the coast, however, Roger Hill has a reputation for producing sea-kindly hulls and this boat is a true blue-water catamaran.  I had no doubts it would perform well in a seaway.

In the smooth stuff the boat was very light on the helm and tracked straight without any input from the driver; a mark of the Seastar power-assisted hydraulic steering.  The silent exhaust system also makes the boat very quiet underway.  The Montebello had the feel of a fine piece of machinery.

Another advantage of a catamaran for cruising is its economical fuel consumption. at 18 knots cruising speed, the two Yanmar 315hp v-drive diesels turning four-blade propellers use a meagre 55l per hour. that gives the boat quite a range of some 450 nautical miles from the 1400l fuel tank. at 3800rpm, the Yanmars were pushing the boat along at 26 knots.

Volvo Penta IPS is also a propulsion option.  To say that the team behind Montebello is passionate about their boats is an understatement.  That’s why they hired world-class companies to confirm the engineering standards.

The team has shown that, using Australian talent, it is possible to put together a craft that is as good as, if not better, in quality than most of the big name imports—and at a realistic price.