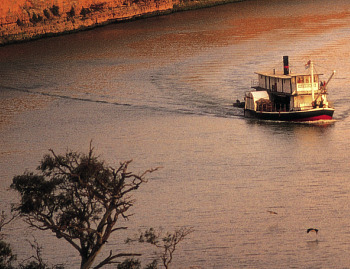 If it’s adventure, comfort and safety you’re after, hire a houseboat on the Murray River.

‘Houseboat’ is a funny blend of a word.

It promises the adventure of boating without forfeiting the comforts of home. Like the paddle-steamer, there’s something old-fashioned about the houseboat. Yet whereas the paddle-steamer survives mostly for its nostalgic value, houseboats are thriving on rivers and lakes everywhere.

The houseboat once offered a degree of home comfort unknown on cramped, leaning, hulled boats. This is no longer the case, since modern hulled boat are as (if not more) comfortable than many people’s homes. Nowadays, you can cruise offshore in large seas on a stabilised, air-conditioned powerboat with flat-screen televisions in every room.

So why are houseboats still thriving? The answer lies in the hull, or rather lack of it. A houseboat is designed to be a human dwelling. It is not a seaworthy vessel. Yes, it travels across water, but only flat, predictable water.

Its limited range means that the houseboat can afford a flat and broad hull, closer to the foundation of a house than a hull. Even if you install stabilisers to the hull of a normal boat, it’s still going to lean, pitch and bob, and you’re still going to have to live inside its hull. This is as true of semi-planing hulls and multihulls as it is of displacement hulls. And as anyone who’s lived on a boat knows, the inside of a hull is inherently poky. No matter how well designed, the interiors of most boats (gin palaces aside) are always going to be more cramped than houses.

A houseboat, on the other hand, allows its inhabitants to live entirely above the waterline. It’s a different experience, unique to houseboats. It means that life aboard a houseboat really does feel like life at home. No one could honestly say the same of  a boat.

Also, the houseboat’s lack of seaworthiness means that houseboats cluster on waters protected from swells and storms.

So a houseboat has two unique factors: it is a home, and it is on a safe body of water. This combination presents a hard-to-beat proposition to families looking for a hassle-free and relatively safe holiday, or to retired couples who want the adventure of travel without the risks and hassles of the sea, or to honeymooners keen to drift carefree downriver together.

In Australia, there is a thriving houseboat hire industry catering to all of the above. There are dozens of excellent houseboating destinations around the continent. The Tweed River that divides Queensland from NSW offers houseboaters magnificent rainforest scenery, as does Queensland’s Coomera river and the Nambucca in northern NSW; the complex waterways of the Hawkesbury, despite being just outside Sydney, offer hundreds of private anchorages for those keen to escape the crowds; for those who like their wilderness remote, houseboats can be hired on the Nornalup and Walpole inlet system, the Kalgan River, in the Kimberley and on the Margaret River in Western Australia.

There’s no prize, however, for guessing which body of water tops the list of the nation’s houseboating destinations: Australia’s longest river, the Murray.

That the Murray’s 2,000-plus kilometres of meandering river from the Australian Alps to the Southern Ocean is ideal for houseboating is a no-brainer. The Mighty Murray encompasses three states and passes through dozens of picturesque towns and villages, from Albury and Wodonga through Mildura all the way to Murray Bridge in South Australia. Yet for all that, the Murray isn’t as mighty as she once was—the demands of our crazy world meant that in 2008, she received only 38 per cent of her natural flow. This is bad news for all the Murray’s river life, including several fish species loved by anglers, and for the magnificent River Red Gum forests, the survival of which depends on the river’s flood—a flood that irrigation and dams have all but killed off.

Still, the Murray remains a magnificent place to houseboat. Its length means that holiday-makers have a huge range of riverscapes to choose from, from her fast-flowing upper reaches, where the River Red Gums line the steep banks, to the plains near the river mouth, where willows droop into the slow-flowing water.

In the following pages, you’ll find a houseboat-hire guide to the Murray River, starting upriver and following her flow towards the sea.

The farthest reaches of the Murray, near its sources in the Australian Alps, are not navigable by houseboat. Further west and downriver, there are several houseboat hire companies in the twin towns of Echuca/Moama (the first in Victoria, the latter in NSW), and some beautiful landscapes to discover, including the River Red Gums of the Barmah State Forest.

There’s plenty to see and do in echuca itself.  In the 1870s, echuca was Australia’s largest inland port. Rail and road put an end to that, but the 19th and early 20th-century buildings dotted around the town lend it an historical charm. Nowadays, Echuca boasts that it is home to the largest paddle-steamer fleet in the world, including the world’s oldest surviving wood-hulled paddleboat, the PS Adelaide, built in 1866.  Echuca has its own airport. It is 2.5 hours’ drive from Melbourne, seven hours from Canberra, eight hours from Adelaide and 9.5 hours from Sydney.

Luxury on the Murray Houseboats

The Lazy River – Swan Hill and Below

Below the steep banks and Red River Gum forests of its upper section, the Murray skirts the edge of the semi-arid outback and flows through the flat floodplain of the Mallee. In this section, several interesting historical towns line the river, including Mildura (citrus capital of Australia) and Wentworth (where the Murray meets the Darling River). Much of Victoria’s fruit is grown in the fertile banks of this section of the Murray, and it’s also good wine country. If you’re lucky and very quiet, you might see the shy Mallee fowl, an endangered, mound-building flightless bird that lives in this area. This is the most user-friendly section of the river, and consequently there are dozens of houseboat hire companies operating in the towns on both sides of the border.

West of Wentworth, the river crosses the border into South Australia’s Riverland region, which is where half of South Australia’s grapes and 90 per cent of its citrus and stone fruit are produced. in this remote and therefore relatively unblemished section of the river, you’ll drift past River Red Gum and Black  Box forests, as well as steep and colourful  cliffs, a wonder to behold.

The area’s wildlife congregates near the water, and you can expect to see pelicans gliding gracefully along the water’s surface and be woken by the riotous laughter of kookaburras.

The orchard town of Renmark is the first major river settlement on the South Australian side of the border, and there are several houseboat hire companies operating from here (Renmark is derived from an Aboriginal word for ‘red mud’, referring to the fertile soil found here).

Further downstream is the historical hamlet of Blanchetown, where a ferry crossing was first established in 1879. Blanchetown is also famous for its Shack City, where people have built shacks on the river’s edge out of anything they could get their hands on.

Houseboat Hire in South Australia from Renmark to Blanchetown

River Plains and the mouth of the Murray

Their fine climate and proximity to Adelaide make the river plains region and river mouth among the most visited sections of the Murray. South Australians flock to Murray Bridge in particular to swim and waterski in the summer. Upriver, the quaint historical town of Mannum claims to be the houseboat capital of Australia, and there are dozens of houseboat operators here, where river is broad and slow, with willow trees drooping lazily from its banks. if your idea of a holiday involves a fine lunch aboard your houseboat, then an afternoon nap beneath a riverside willow tree, then Mannum is for you. And if you’re into decent wine with that lunch, the Barossa Valley is nearby.

Houseboat Hire in South Australia – Mannum and Below