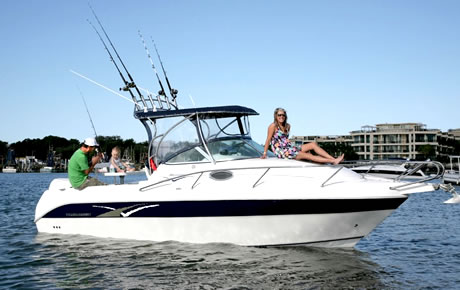 After releasing its award winning 2000 Bluewater model (it took out the Modern Boating Family Boat of the Year Award in 2004) Mustang saw a strong customer demand for a slightly larger family fishing and cruising half cabin boat.

Mustang already had the 2250 Walkaround, a centre cabin as its name suggests, but people wanted a roomier cabin, so the 2250 Bluewater was born.

Bearing in mind the hull’s well established reputation, this test was the perfect opportunity to check whether the added weight and tophamper of the bigger cabin had changed anything. After surfing the wake of a passing cruiser, I’m pleased to report no ill effects were apparent. Although my passenger was somewhat nonplussed!

My only criticism of this boat was the lack of trim tabs, which would make this already good boat even better.

Hydraulic power steering is supplied with Mercury’s Verado packages, which made the Mustang a dream to drive. With a Mercury Verado 225 sitting on the back, the 2250 Bluewater was up and running in a blink. Punchy mid-range acceleration and a healthy top speed were there too. Verado power mightn’t be the cheapest way to put a 2250 Bluewater on the water, but it’s definitely a worthy consideration.

LAYOUT
Full deck mouldings, like those used on the 2250 Bluewater, can get in the way when fishing, because their vertical sides interfere with essential leg support. Mustang cleverly avoids the worst of this by inserting a second moulding into the cockpit sides. This incorporates the necessary ‘toes in under’ geometry, although it doesn’t extend right across the transom wall.

A three-quarter width aft lounge (that folds flush when not required for seating) provides a padded surface to lean against, so the cockpit measures up pretty well for serious fishing. But we do recommend any potential buyers take the workstation (shown on the test boat) option if they intend to use the boat as a fishing platform.

There’s a 60lt live-bait well in the transom covering board and a locker containing a set of fenders.

If you count the 190lt capacity fish box/icebox set under the deck between the helm and passenger seats, there’s three separate iceboxes onboard. There’s another beneath the passenger seat, plus a removable 45lt Esky mounted underneath the helm seat’s frame.

The clip-in carpet can be quickly removed for fishing trips, leaving a large area of non-slip deck. The area is also easy to clean and safer due to the addition of a self-draining deck.

While standing at the helm, the height of the screen frame obscured my forward vision. But when I mentioned it I was assured Mustang were happy to adjust things to fix this. Now that’s a refreshing change to the inflexibility usually encountered from boat builders.

Both of the comfortable bucket seats have a footrest and a substantial grab rail around the windscreen. Only the helm seat adjusts fore and aft, but both can be rotated 180 degrees.

SMARTCRAFT
There’s ample room for instrumentation on the dash and it’s worth mentioning the paired Navman Fish 4600 and Tracker 5600 units fitted to the test boat. These served as an advanced fish finder integrated with Mercury’s ‘Smartcraft’ system (the Fish 4600) and a mapping GPS (Tracker 5600).

With the Fish 4600 switched to the appropriate display, you can monitor rpm, speed, leg trim, oil and water pressure, engine temperature and fuel flow and then revert back to a sophisticated fish finder at the touch of a button. It’s a very useful facility.

Inside the cabin there’s a 2.4m double bunk that’ll provide a comfortable night’s sleep for two. The cabin has ample ventilation from a large hatch and opening windows in the cabin sides. The sliding cabin door can be securely locked, which unfortunately, is a necessity these days.

A square sink and pantry cupboard are located to the side as you enter the cabin. The test boat also had an optional 42lt Isotherm 12V fridge.

A 60lt-freshwater tank supplies water to the sink and to the handheld shower recessed into the boat’s transom.

Underneath the bunk is a portable toilet. The test boat was optioned up with an electric flush model and holding tank. Inside, the cabin is finished in suede with full head lining overhead.

Back out in the cockpit, a sizeable transom door leads to an extendable boarding platform on the portside.

The test boat featured a neat stainless steel Targa bar and bimini top with an extension over the cockpit. It can be quickly removed on fishing days and the whole Targa assembly folds down to lower the boat’s overall height.

In short, this is a great boat and a fitting upgrade from Mustang’s superb Bluewater 2000!

SCHOOL’S IN
Mustang Pleasure Boats are built by Hancock Marine in its new 5000sqm factory at the Gold Coast Marine Precinct. The company manufactures a range of trailable sport cruisers, day cruisers and fishing boats from 16 to 24 feet.

Brothers Paul and David Hancock established the company in 2001 and have used their business and engineering backgrounds to build it into a driving force in the trailable boat market in Australia.

The forerunner to the 2250 Bluewater, the 2000 Bluewater, won the Modern Boating Family Boat of the Year title in 2004.

PERFORMANCE
In calm conditions, with two adults onboard, we returned the following performance figures: