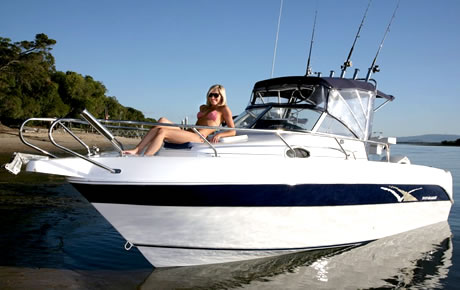 The most impressive thing about the latest Mustang 2250 Walkaround is the way the boat deals with the negative aspects normally associated with a centrecab layout and creates a totally workable package.

One of the biggest problems with most boats of this style is that the U-shaped fibreglass tub, formed between the front of the cabin and the bow, becomes extremely slippery when wet. But Mustang has overcome this problem in the 2250 Walkaround. This model has a large non-slip deck in the bow. This deck remains usable while playing a fish, or working with the anchor, even when it’s covered with water.

OK, that’s one negative out of the way, now what about that navigation light mounted on the side of the cabin wall? We keep banging our legs on it as we move around. The problem is easily rectified by relocating the light. Negatives? What negatives!

Full deck moulds, such as the Mustang 2250, normally also face another inherent problem. Because the deck, cabin, cockpit walls and transom are moulded in one piece, it’s difficult to provide the necessary overhang, so anglers can brace themselves with their toes under the gunwales in the cockpit.

This may sound superfluous to cruising boaties, but if you have ever tried to stand up fighting a big fish in a bit of a swell, you’ll understand just how important this Aussie toes-under requirement is.

Mustang deal with this problem in the 2250 by inserting separately moulded recesses into the gunwales and adding padded bolsters to the top sides. These allow the toes to fit into the cockpit walls.

With that negative also out of the way it leaves little to be critical about – apart from the inevitable intrusion of the sterndrive engine box that is. In a 22 and a bit foot boat, this is always going to be a sad fact of life, unless someone comes up with an engine with a flat cylinder configuration – like VW and Subaru car engines – capable of being mounted underfloor in the limited space available in hulls of this size.

Sterndrive boxes are something North Queenslanders have been living with for years, simply because they consider the advantages of a sterndrive’s fuel economy outweigh the downside of the intrusion by the engine box.

But Mustang have minimised this intrusion with padding. It lets you comfortably kneel on the box while using the bait board. The problem is also helped by the addition of removable corner seating.

But for those who can’t tolerate any loss of cockpit space, an outboard version of the 2250 Walkaround is already in the pipeline. All things going to plan this model should hit the streets by the time this issue goes to press.

The necessity to choose a sterndrive against an outboard to save on fuel has been overturned by the release of the new big banger four-strokes and new technology two-stroke motors now available. Mercury’s OptiMax range, Yamaha’s HPDI 200hp two-stroke and now their 225hp four-strokes, are currently changing everybody’s thinking about the relative merits of sterndrive and outboard power in boats of this size.

And that’s without taking into consideration Honda’s long awaited big banger 225hp four-stroke having also been released, as have the reborn FICHT technology two-strokes. These are all extremely fuel efficient motors.

Having fathomed a course through all of the above, and still being enthusiastic about this boat, brings us to the important subject of trailering. Significantly, on the day of the Modern Boating test the 2250 Walkaround turned up on a trailer behind a turbo-diesel powered Nissan Patrol 4WD. Because of a wide 2.44m beam many would be seriously considering either marina or dry-stack type storage for a boat of this size. But a trailer remains a viable proposition even if the choice of tow vehicles is limited.

Out on the water the Mustang 2250 Walkaround’s 18-degree deadrise manages to avoid the dreaded deep-vee habit of falling from one chine to the other as weight (passengers) move around inside the boat. Sometimes I am accused of being a minimal test of a boat’s static stability. But I will point out that the two blokes aboard in the photos aren’t exactly 60kg lightweights like me. Nor did they make the boat flop about in the water when they moved around.

Subtle refinements to the chines and strakes from this boat’s predecessor, the popular Mustang 2150 Walkaround, do give the 2250 a noticeably more bow-high attitude at speed. Unfortunately, calm sea conditions during the test didn’t give us the opportunity to check if the change in riding attitude has decreased the 2150’s soft riding characteristics at all.

But inside the vessel the attention to detail used during construction is clearly evident. It’s above average. While this is expected from the second generation of an established and successful formula, few boats are able to deliver to the extent found here.

Even the most discerning eye finds precious little to be critical about. The Mustang 2250 Walkaround is an exceptionally well thought out and put together boat. It serves just as well as a pocket sportfisher as it does for those more into reef fishing. But the cabin dimensions and fittings, such as the folding telescopic ladder on the transom platform, help this boat double as a useful family boat.

Interestingly, much of the refinement work has been executed by a mould fabricator who is a long time 2150 owner. The resulting intimacy he has with the boat’s interior shows. In the cockpit twin 60lt bait wells grace the aft covering board. Only one of these was plumbed.

Under the deck are a pair of 85lt kill tanks. These are deeper than the 2150s because the deck of the new model has been raised substantially. This also allows the deck to self-drain more effectively.

The folk at Mustang went to great pains to point out the raised lip under the engine box, which prevents water from the deck running into the engine compartment. It often happens with some boats and makes a nonsense of a supposedly self-draining deck when volumes of water end up down in the bilge.

In fact, because the 2250 has extra bulkheads in the bilge and plenty of thought was given to the placement of the bilge pump pickups, this underfloor area around the motor stays completely dry. This helps prevent the sump from rusting, which is the cause of many problems with inboard motor installations.

Moving forward the helm and passenger area is a little narrow because of the space taken by the walkaround deck beside the cabin. But if you look at the pictures you’ll see that our pair of… er… models, although big blokes, aren’t overly cramped.

The seat pedestals are mounted on top of well-insulated bins, which can be used as either ice boxes or dry storage as required. A tackle box is set into each side of the passenger area and the helm ergonomics are good. But I did find that my 170cm height placed the screen frame directly across my line of vision when standing. This is something I would have to adjust to if one of these boats were mine.

Inside the cabin is fully upholstered, which helps to keep it both cool and quiet. There’s a large hatch in the roof that opens for ventilation as do two smaller side windows. The cabin door can be completely secured if necessary. Also, insect screens weren’t fitted to the test boat, but this wouldn’t be a difficult task to complete at a later date.

Under the infill cushion there’s room for an optional Porta Loo, while the bunks are large enough for two big fishos. With the infills in place, a couple would be more than comfortable sleeping in the cabin for a night or two.

Up front the anchor well is huge. Everything is arranged to ensure the safe handling of ground tackle. And yes, it is feasible to fish from the bow area.

Overhead the folding stainless targa bar is fitted with six rod holders plus the outriggers and aerials. There are another four rod holders set into the gunwales and three more mounted on the bait board.

A 260lt fuel capacity is in keeping with this boat’s offshore destiny. Apparently the new outboard version will be capable of holding more fuel.

All-in-all the team at Mustang has put together a total package that’s as comfortable cruising as it is out wide fishing. The 2250 is a top bluewater boat and its ability to be trailered makes it a viable option as a true pocket sportfisher.

Engine Room
The 4.3lt MerCruiser V6 EFI power plant installed in the test boat is rated at 210hp. Fitted with a 17″ pitch propeller it produced a top speed of 36 knots and reasonable out of the hole acceleration for a boat this size.

The engine weighs-in at 389kg and supplies the power through an Alfa One sterndrive with a 1.62 ratio. The hull is rated to a maximum 230hp.

How this boat performs with outboard power will be interesting to see. It works well with the sterndrive fitted here and the outboard option is going to make a choice either way difficult.

At least the choice of the basic hull is easy, because outboard or sterndrive, you’re not going to go wrong with Mustang’s 2250 Walkaround.