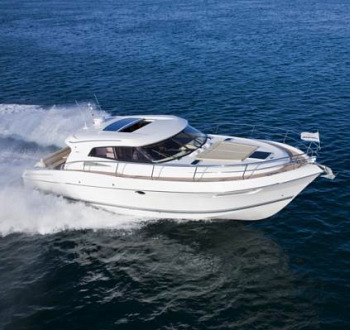 Mustang boats return to their sports cruiser roots with the new 430 Sports Coupe.

The open plan allows the cook to socialise while preparing dinner.
The large sunroof keeps the summer outdoor feel while enjoying the comfort of the lounge.

It’s been 12 months since the Asian arm of South africa’s Standard Bank took over Gold Coast builder Mustang Marine.  Since then, there hasn’t been much coming out of the Molendinar factory, not even the odd rumour—they have kept a very low profile.  Behind the scenes, though, it has been a hive of activity.

The new team headed by CEO Chris Heaton has taken the company back to its sports boat roots.  In January, Mustang splashed the 430 Sports coupé—a stylish sports coupé package aimed squarely at a leisure market looking for indoor/outdoor living on the water.

The concept of this boat represents a totally different approach to anything Mustang has produced in the recent past.

“The market is changing and people are now wanting a single level indoor/outdoor style of boat that can be opened up to let the sun in”, said Mustang’s operations director Russell Weston. “We identified it as the way to go and the 430 is the first of some new models we plan to produce; some will head in a different direction again.

“We see the 430 as getting back to our original sports cruiser roots.  We had gone off to conventional flybridge boats, which was not in our original game plan,” he said.

The flybridges, inherited when the company bought the oliver factory in new Zealand, did give Mustang big volume hulls, however, which they didn’t have in the first sports cruisers.

The 430 Sports coupé uses the 43 flybridge hull.  It keeps the same deadrise and reverse chines, but the keel has been removed, so it can be powered by volvo Penta’s iPS.

A lot of work was done with Volvo Penta technicians to get the centre of gravity right with the aft-mounted engines and pods.  The positioning of the fuel tank and other equipment, such as generators, was important.

Heaton sees pod drives as the way of the future and is looking at triple and quad installations, and down the track there are plans for european-styled 50 footers plus, which will carry multi-pod installations.

The 430 Sports coupé will only be available with a pod drive system and it’s more than likely that all the new boats coming out of the factory in future will carry pod drive propulsion.

For those who are still not convinced that the forward-facing propellers of the IPS is the way to go, Mustang plans to install the cummins/Mercruiser Zeus system if customers want conventional aft-facing props.

The 430 Sports coupé is a product of Mustang’s in-house design team. Paul Bourke is responsible for styling concepts.  He comes from the automotive industry and has brought a raft of new ideas and concepts with him.  Gone are the traditional slab-sided designs; in their place, he has introduced smooth flowing surfaces and curves influenced greatly by the lines of a Lamborghini Diablo.

“It’s all about curves and finessing surfaces”, said Bourke.  “It’s something you learn from the automotive industry.  There’s more emotion in the styling.”

The boat has been designed as a true production boat.  It’s all part of Mustang’s desire to move away from the old and costly building methods that seem to be entrenched in the marine industry and to think outside the square.

There will also be a noticeable difference in the quality.  The old Mustang factory used contract labour to put a boat together.  Now there is an in-house styling team and an in-house development team that puts a new boat together and nuts out all the issues before it’s handed over for production.  According to Weston, new production techniques will maintain a consistence of quality and safety in each boat.

The 430 also introduces some new innovations, but it’s not innovation for innovation’s sake.  The timberwork is also a feature in the boat.  All the cabin furniture is now built from top-quality gaboon marine ply, instead of using heavier fibreglass moulds.  It’s the same timber used by major boatbuilders around the world.

Mustang has an eye on the world market and is calling the 430 a world boat.  All boats now come out of the factory built to OE standards.

It’s obvious that many hours of bouncing ideas to and fro have gone into the creation of the 430.  The big boarding platform is a good place to start.  It’s operated by two solid-looking rams with the water flowing through two wooden grates when it’s lowered into the water.  It makes it easy to run a jet ski on, and it’s a good place to just sit in the water at the back of the boat cooling off.

The cockpit comes with a teak floor, a lounge and a teak table all set on the hatch that lifts up electrically to reveal the engine room.  The cockpit runs seamlessly into the main cabin when the doors and the galley window are open.

The galley runs down the starboard side with a cleverly designed, electrically operated, slide-out pantry; microwave convection oven; dishwasher; fridge and two-burner cooktop.  The workbench is corian and all the drawers are self-closing.

Normally the switchboard for a boat’s electrical components is located in a handy position near the cabin door.  All I could find was a cabinet for glasses and a small screen underneath.

The small screen was the Multiplex management system I had been hearing about.  The system replaces the AC/DC electrics with touch screen controls.  It even includes an electronic version of the owner’s manual.  The system takes a lot of wiring looms out of the boat and saves a heap of weight—and the inevitable electrical problems down the track.

A feature of the main cabin is the black walnut floor.  It looks good and is unusual in a boat of this style.  The rest of the woodwork is top-of-the-range gaboon marine ply.  This is strong and light and also saves weight throughout the boat.

A simple touch, missed by many builders, are the two stainless hand holds mounted at either end of the large sunroof.  One is in the right place for someone to grab when coming in from the cockpit and the other when coming up from the accommodation companionway.

The sunroof is made by Trend in England.  It comes complete and mounts straight into the roof.  This is operated electrically, except the sunroof screen has to be pulled across by hand.

The two comfortable Italian helm seats are in front of the compact console with enough room for two Simrad screens.  Raymarine and furuno units also fit; it’s the customer’s choice.

The first 430 was ordered with a two-cabin, one-bathroom layout.  The master cabin is up front with its island berth and the second cabin has two bunks.  There is also a three-cabin, two-bathroom layout, but some of the room in the main cabin is lost for the third cabin.

There are many things built into this boat that makes it stand apart from other brands—and the early Mustangs as well.  The companionway is 800mm wide, not 600mm, and the four steps down to the accommodation slope gradually, so you don’t arrive in a hurry at the bottom.

The handrail has been beefed up to 30mm and is constructed in one piece of stainless.  The uprights are set into fittings on the deck, similar to yacht stanchions, so the whole thing can be removed easily and repaired if needed.

The side decks are wider, around 400mm, with a hint of a gunwale to comply with European community standards.  It’s easy to walk to the bow without having to shuffle sideways.

The 430 is driven by Volvo Penta’s 600 IPS (435hp), which suit it perfectly.  The second boat out of the factory will be powered by the Cummins/Mercruiser Zeus system.  The 430 loves to cruise at 25 knots where it uses 54lph per side of fuel.  Wide open, it hits 32 knots with 60 percent of trim on the tabs.  The second 430 will be fitted with volvo Penta’s automatic trim system, which removes the mystery and trims for you.

The boat is easy to drive and when it comes to docking, just switch to joystick mode and it’s no problem, even in a crosswind.  Volvo Penta’s joystick docking takes all the drama out of docking a boat this size in a marina.

The 430 Sports Coupé is a head turner and shows that Mustang is back bigger and better than ever.  It’s a shame that the Australian Marine industry awards will not be held this year.  The Mustang 430 Sports coupé could well have been a candidate for the top prize.