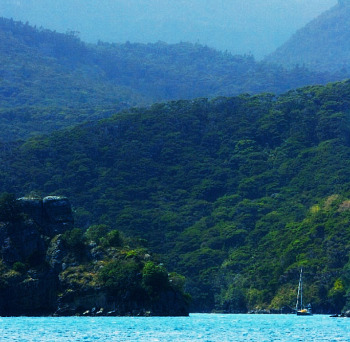 The tasty john dory are a good back-up for when the snapper and kingfish are hiding and the ship – Island Passage has plenty of room for passengers and crew with one of the best views aboard.  The cabins would do any upmarket hotel proud.

It was the promise of some fantastic snapper fishing that attracted me to New Zealand. Not a line had been wet though before I discovered something I didn’t know about the Land of the Long White Cloud: Kiwis are insane about rugby – to them, it’s not mere religion, it’s a mania.

My hotel room overlooked Auckland’s marina, where the previous evening I’d passed a most enjoyable hour or so revisiting New Zealand’s America’s Cup triumph-something they’re obviously proud of. At least their America’s Cup hero didn’t fall from grace into jail. Later that night, my blissful slumber came to a rude end. The bar directly below my room saw fit to open for some rugby game and, judging by the racket, the place was packed out. I had my revenge, however: looking at the crowd of downcast Kiwis around the waterfront cafes when, bleary-eyed, I went down for breakfast the next morning, I surmised that the local team must’ve lost.

I’d found my ride the previous afternoon tied alongside a nearby wharf, and soon found I was wrong about another thing. This wasn’t a boat, the crew insisted adamantly as we boarded-it was a ship!

I’d looked her over from the dock and could see she was pretty impressive at 42m. Did that make her a boat or a ship?

An answer came from a uniquely qualified fellow passenger.  After a day or so everyone was calling him the Admiral, which they did affectionately because this elderly gentleman served in the Navy during WWII as commanding officer on a minesweeper.  He was a lovely old bloke and a genuine gentleman.

By the time we sailed, it had become obvious we’d lucked onto one of those rare people who are innately delightful company. By then, he was already the crew favourite; and we fellow passengers weren’t far behind. When asked about this boat/ship business, the Admiral quietly assured us a boat was any craft that could be lifted aboard a ship.

I’ve been around a few charter boats in my time as a fishing writer moonlighting as a boating writer and must agree that Island Passage is nothing like any charter boat (ship) I’ve ever been aboard. Ship indeed, my cabin was much the same size as the upmarket hotel suite I’d occupied the night before, sans rugby fans (thank goodness).

Island Passage has three deck levels, with a heliport on the uppermost one. You could play touch footy in the saloon, and the aft deck area stretched an awfully long way past a full-size barbecue set-up to an outside living area on the stern.

Every charter boat brochure I’ve ever seen uses words like ‘luxury’ to describe onboard appointments; the Island Passage made a joke of all that. ‘Luxury’ is one of those words that, like ‘hero’, has just about lost relevance in today’s marketing-hyped world. So has ‘opulence’.

So forget luxury and opulence as far as Island Passage is concerned. Let me assure you we’re talking about what I’d call ‘comfort’ here. Yes, comfort; a little understated perhaps, with a certain undeniably assured style.

The passengers were a mixed bunch. Apart from the Admiral, there were several other people along for a relaxed sightseeing cruise of Hauraki Gulf. Then there were the fishos.

These consisted of me, seven keen fly fishers (who had organised a fishing tournament amongst themselves), Gary Barmby (patriarch of Angling Adventures, a leading Australian company that packages fishing trips all over the world) and his sidekick, the inimitable Neville Daniel, who introduced himself as ‘Nifty’ and went downhill from there.

Nev is a gifted raconteur when the mood takes him and darned good company, whatever mood he was in. He and Gary were, along with myself, the keen non-fly fishers aboard.

We three quickly attached ourselves to Steve Cooper, Island Passage’s deckhand, onboard coxswain and fishing guide, leaving the fly fishers to their own devices. Steve soon had us in the lounge with the brag books out while we oohed and aahed over an impressive collection of grinning anglers holding huge snapper and yellowtail kingfish.

Now, between Gary, Nifty and me, you could count a century-odd in fishing tourism, and could almost double that as enthusiastic fishermen. Us fishermen invariably have one eye cocked towards the weather, and the cacophony of clanging stays in Auckland Harbour hadn’t gone unnoticed.

When we cleared the harbour, the sea looked awful. I imagine everybody reading this will relate all too well I say our weather would not only have blown a dog off a chain, but would then blow the chain away. The weather report called it a full gale warning.

To the eternal credit of Island Passage skipper paul Mabee, he unobtrusively chose a direction of travel each day which took us from sheltered anchorage to sheltered anchorage while maintaining a course around Hauraki Gulf that kept our ship at a friendly angle to the weather. Meanwhile Gary, Nifty and I exchanged knowing glances while it became increasingly apparent Steve was talking things up. He already knew we were going to do it hard finding fish in this weather.

Soon enough, Gary asked a direct question about fishing in the weather and while Steve’s smile remained fixed in place and his patter didn’t miss a beat, he was talking to three blokes who’d been where he was more times than we wanted to remember. I don’t recall exactly if Gary, Nifty and I ever actually agreed we were obviously not going to see Hauraki Gulf’s fishing at its peak and the best thing we could do was kick back and enjoy the trip-it somehow didn’t need saying.

Being kept away from what the brag books showed to be ordinarily great fishing was terribly frustrating, to put it in polite language. Nonetheless, this proved an outstanding trip aboard a pretty special vessel. There can’t be too many places in the world or too many cruise operations where topography facilitates such an enjoyable cruise, regardless of the weather.

The crew, the service, the accommodation and the food were all top shelf. Yes, the Island Passage experience showed my upmarket lodgings in Auckland a thing or two.

But I need to save all my superlatives to describe the scenery around Auckland Harbour and the Hauraki Gulf Marine park. Superb, sublime, stunning, gorgeous, fantastic-take your pick. They all fall short of describing what we saw every day from Island Passage. And that was just while we were aboard.

Our ship carried two 6m centre console sportfishers plus a 7m landing craft and two 4.2m tenders. What’s more, a helicopter can be called in for transport to and from the Gulf’s islands.

We used the boats to fish when we could, and for transport to the islands the rest of the time.

Helicopter flights are an option to provide an entirely different perspective on island scenery. Golf excursions and winery tours on Waiheke Island are also available.

One island option I found particularly interesting was Glenfern Sanctuary, a private conservation effort on Great Barrier Island around 100km north-east of Auckland’s CBD. A small peninsula here has been completely fenced off and feral predators removed prior to a carefully planned recovery effort for several endangered species of native birds. Most of the peninsula retains its natural bushland, while degraded vegetation in other parts is being regenerated.

Glenfern is a remarkable initiative run by folk with real passion for what they’re doing (not to mention enviable amounts of energy). It makes a point very dear to my heart: that conservation shouldn’t be all about rabid radical greenies. It’s a definite must-see for anyone with genuine interest in wildlife and conservation.

After our time in remote parts of Great Barrier Island and the Coromandel peninsula, there was time for one last desperate (wind blown) attempt at fishing before the chopper arrived to pluck me off Island Passage and deposit me at Auckland International Airport. In a confusingly brief time span, I was back in Brisbane already wondering what time of year the weather around Auckland is likely to be more reliable.

There were some very nice snapper in that damn brag book…