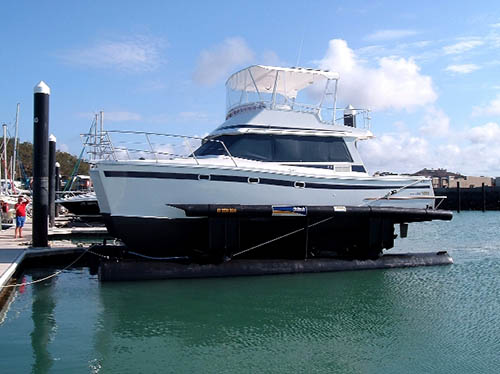 A RARE BREED – Need to blast your way out of your local bar ? Tackle it with a Noosa Cat

It’s an irrefutable fact that power catamarans deliver a softer and drier rough water ride than any mono-hulled vessel (except a big ship, that is).

From personal experience I can assure readers if you were to line up a 40ft power catamaran and a 40ft monohull (both with the identical power and drives) behind a river bar in rough conditions, and they put to sea at the same time, the cat would leave the mono-hulled boat dead in its tracks.

It all boils down to physics. A cat’s twin hulls are much narrower than the beam of a mono, so they ‘slice’ through the water cleanly and with less friction, trapping air in the tunnel between the hulls. The boat literally rides on this cushion of air. It works exactly like air suspension on a bus. The boat has the ability to ride (read slice) across the top of waves without crashing and banging, but if it did come off the top of a wave, the trapped air keeps the bow up and cushions the impact as she lands in the trough between the waves.

Once outside the bar the cat’s rough water performance would also be better for the same reasons.

In short, if your boating requires a lot of bar crossings, or you spend a lot of time operating in waters continually plagued with a nasty, short chop, have a closer look at a power catamaran.

THIS TEST
For this test the Modern Boating team travelled to Maroochydore, north of Brisbane, to put Wayne Hennig’s latest Noosa Cat 4100 Flybridge (extended cabin) through her paces.

Noosa Cat’s heritage dates back to 1972, when professional fisherman Bruce Harris created Australia’s famous Shark Cat brand. When Harris retired in the 1980s, several other entrepreneurs took over the reins, but the brand slid sidewards for many years.

Wayne picked up the pieces in 1990, and during the last 16 years has brought back the legendary performance standards, provided financial integrity and re-introduced stable management. The resulting Noosa Cats are now built in a 40,000sq ft production facility at Noosaville, Queensland. Its boats perform so well that many police and rescue groups, serious commercial fishermen and recreational fishos and divers put their trust in these almost legendary vessels.

A pair of Volvo D6 310hp turbo diesel sterndives power the test boat, named Akeshi (a rare black pearl), which left for her new home in Indonesia (where she’ll carry out surfing charter work) only days after this test was completed.

Some may find the sterndrive installation an interesting choice of power, but it creates more usable space in the sponsons, lets the boat operate easily in shallow water and allows it to be beached as required.

The big news in 2006 is that a Noosa Cat 4100 Series was the first multi-hull vessel in the world to be fitted with Volvo’s revolutionary IPS drives and Volvo has fully certified the installation. Having driven the new IPS version at the Sydney judging of the AMIF Boat of the Year awards, the team can attest that this great handling boat with sterndrives has evolved into an awesome vessel with the IPS drives.

PERFORMANCE & HANDLING
The 310hp turbo sterndrive installation gave Akeshi more than ample power and she lacked none of those classic catamaran handling characteristics. She has a soft, stable and dry ride in almost any conditions, good slow speed manoeuvrability and a range of around 600 nautical miles cruising between 24 to 30 knots. During this test we found sitting on 27 knots ideal. At this speed the engines run quietly at 3200rpm and she burns only 3.7lt per nautical mile. Top speed on the Furuno GPS was 34 knots at 3400rpm using 4.26lt of fuel per nautical mile.

One of the cat-handling characteristics some may need to get used to is the way the boat leans outwards in a tight turn. It did take me a while to note this idiosyncrasy, but it was hardly off – putting. Curiously, driving the Noosacar IPS 4100 back in Sydney I noted this vessel turned flat and lacked that awkward outwards lean.

LAYOUT
Akeshi has an interesting transom setup; there basically isn’t one. She was designed so a jet ski could be pulled up into her cockpit and surfers would have much easier access to and from the water with their boards. The rear cockpit is fully covered to keep the tropical sun off the passengers and crew and its wide-open layout gives easy access to the engines mounted at the rear of each sponson. A genset is located in the sponson forward of the port engine.

A simple ladder leads to the flybridge, which features comprehensive instrumentation for the twin engines and centrally mounted helm and aft seating, so a few passengers can keep the skipper company on the long haul home.

The main saloon is typically charter boat. It’s not stark, but is low maintenance. Because each Noosa Cat is outfitted to each customer’s individual requirements, if you want opulence you can have it, at a price. An L-shaped lounge is to port and the galley extends along the starboard side. It features a three-burner stove, microwave oven, small fridge/freezer and single sink.

The Noosa Cat 4100’s lower helm station boasts a comprehensive array of electronics and a helm seat with full suspension, so even if this cat did hit a few bumps, the skipper’s not going to feel them. All of the saloon’s side windows slide open and offer great natural ventilation if you don’t want to turn on the air-con. There’s also two small fans to circulate the air in the saloon.

There’s two forward cabins in the sponsons, each with twin bunks and standing head height at the foot of each cabin. A single hatch services both cabins and a fold-down, wooden flap allows foredeck access from each cabin. The head is on the portside before you enter the forward cabins. It’s roomy, with good head height, but is not overly large.

Storage on Akeshi isn’t a problem. As that old army advert used to say: “there’s lashings of it”. Every nook and cranny has been used, especially the area under the dinette, you could hide a tender in there.

OVERALL
No one can deny the excellent sea keeping attributes of a power catamaran. This one is right up there with the best. If your boating involves a lot of bar crossings, or travel across short, multi-directional chop that seems to plague the tropical north, you’d be well advised to check out one of these new Noosa Cats.

NOOSA CAT 4100
The Noosa Cat 4100 Series is 12.26m of high-performance offshore boat that can truly handle the rough. Designed as a multifunctional vessel, the big 4100 Series cruises in the high 20s with twin, six-cylinder Volvo diesels, but easily runs to over 30 knots with bigger engines.

It’s available in either shaft or sterndrives, with a standard or extended cabin, flybridge and a fit out that can be custom-built.

The Noosacat 4100 can be tailored to meet a wide range of commercial or leisure applications and is the choice of many police and water safety authorities.

PERFORMANCE
With two adults onboard in calm conditions the 4100 returned the following performance readings.

+ Navigation systems; Amazing ride and handling
– Leans out in turns