NorseBoat journey through the Arctic with the Royal Marines 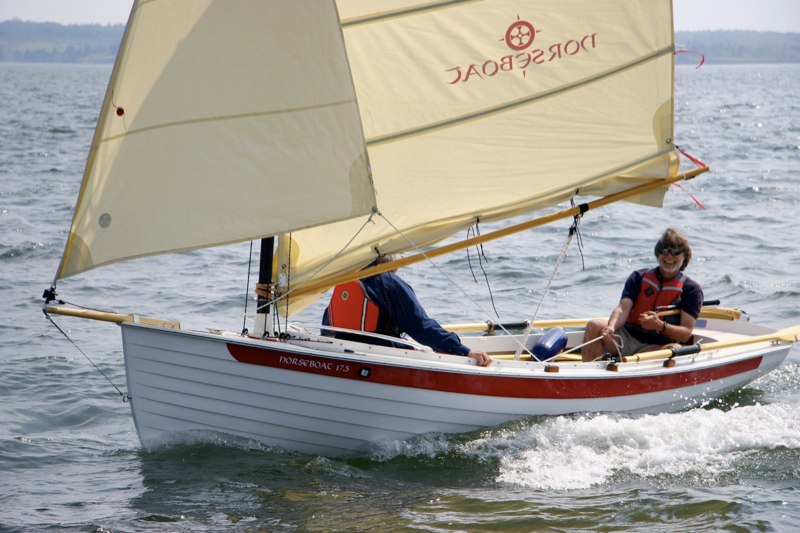 On September 5, 2009 two British Royal marines sailed into the hamlet of Gjoa Haven in Nunavut.  What made this event extraordinary is that they had just completed a 2250km voyage through the arctic in a 17.5 ft. (5.33m) open boat. The two rugged men who emerged from what must have seemed a very small boat were welcomed by local inhabitants Alan Johnson, Don Le Blanc and an eager crew of helpers who made light work of hauling the boat up a steep ramp and into a steel freight container.

Kevin Oliver and Tony Lancashire had set out from Inuvik in a NorseBoat 17.5, an innovative sailing and rowing craft built in Lunenburg, Nova Scotia.  The expedition was conceived to support the UK based charity ‘Toe in the Water’, which uses adventure sailing to rehabilitate men and women injured serving their country.  It took Kevin and Tony 42 days to reach Gjoa Haven.  Along the way the two adventurers encountered a wide range of conditions – sailing to windward in extreme conditions, rowing on glassy seas, sailing steadily at 6 knots with strong following winds, and being locked in ice floes for days on end.  They also encountered charging bears, curious whales, and the warm, friendly people who inhabit the arctic.

The saga began in September 2008 when I was contacted by Tony Lancashire, then working out of Quantico Marine Base in Virginia.  He said he and another marine were attempting to sail and row through the Northwest Passage in 2009.  After investigating the boats on the market they had homed in on the NorseBoat for its seaworthiness and versatility – it can be sailed, rowed by one or two persons, and used as a camp cruiser with its abundant storage and sheltered camping accommodations. Tony and I agreed to meet at the US Sailboat Show in Annapolis, Maryland early October to review their plans.

Upon hearing of the venture my wife said, “I hope you told them that your boat isn’t suitable for that sort of thing.”  I countered that in the right hands a craft like the NorseBoat could do amazing things. “Besides”, I said, “Royal Marines are known for undertaking unsuitably dangerous activities.”  Those thoughts, however, wouldn’t prevent me from having an adrenaline filled summer anxiously following their progress through The Passage on one of my boats.

The marines did purchase a NorseBoat 17.5, and in early May 2009 I delivered hull #89 to Virginia and accompanied Tony and Kevin during sea trials at Quantico.  After a long day of getting the boat rigged and ready, including installing a sliding seat rowing unit, Tony, his girlfriend Laura, Kevin Oliver and myself ventured out onto the Potomac in stiff winds.  It was a good day to test the mettle of the boat and its gear.  She performed admirably, but it was a far cry from the harsh conditions they would encounter in the arctic.

In mid June the boat left Virginia by truck bound for Inuvik in the Northwest Territories.  By the third week in July Tony and Kevin were in Inuvik packing the boat and making final preparations for the journey.  With understated British humour Kevin wore a T-shirt sporting a quote from the movie Jaws, “I think we’re going to need a bigger boat.”  Inuvik proved to be a good staging ground.  As they would find during the entire expedition, local inhabitants were more than willing to offer help and friendship.

During their trip Kevin and Tony would be able to send daily blogs and receive messages from family, friends and supporters thanks to their mini-laptop computer powered by solar panels.  Web guru Terry Hudson of Hudson e-Design in PEI volunteered his own time to create a new website for the expedition with interactive messaging, blogs, a photo gallery, and a tracker showing their updated position on Google Maps.

The marines set off from Inuvik on July 24.  Their blog from that day: “We’re moving at last. This is fantastic. Sitting here in the front of the boat listening to David Bowie – the first of Amber’s* Arctic Mariner Ipod compilations, sailing in light airs. It’s ten O’clock at night and the sun is still high in the sky.  A passing Inuit just gave us a “White Fish” which we have filleted and will cook for tea.  Awesome. We’re making just over 3 knots…” [Amber is Kevin Oliver’s wife]

The reality of just what they were undertaking set in once they reached the Beaufort Sea.  They battled strong, cold headwinds for almost a week.  During this time Kevin celebrated his birthday immersed in Tuktoyaktuk hospitality, sampling caribou steak and dried fish.  Four days later they sailed 26 miles across an open body of water to within 5 miles of their destination shore when contrary winds and waves forced them to turn back; they ended up anchoring that evening within 300 yards of where they started from.

On August 3 their fortunes changed with the new wind direction, now from the NW.  In 30 hours they sailed 120 miles, including two open water passages of more than 30 miles.  Over the next four days they sailed and rowed eastward, making good progress and settling into a comfortable rthym.  They met up with a CoastGuard icebreaker and the crew gave them weather and ice reports and some fresh food.

But on August 8 advancing ice caused them to send this blog:

“Adventure in the arctic is a constant battle with the elements. This time it’s the ice which, according to the captain of the area Coastguard ship, is the worst he’s ever seen (for this time of year). The predominately northwest winds have forced loose ice into the Strait…we now find ourselves locked in a major ice flow, unable to move. We’re in regular contact with the Coastguard who advise that there’s nothing to be done but wait for the southeast winds to break up the pack. We are drifting southeast at about 1 knot. It snowed last night and we had a baby seal playing around the boat.”

The heavy ice delayed their progress but didn’t stop it altogether.  During a five day period they estimate they dragged their boat and gear approximately four miles onto, over, and off of ice floes as they made their way toward open water.  The ice eventually began to break up. From their blog of August 13:

“Our 5 day spell in the freezer is over… We had a magical 2 hours in sunshine and the company of 20 seals…  We then spent 10 miles rowing in (partial ice-covered water) to land at midnight.”

On August 14 they were sited by the crew of the 64 ft. Round The Americas yacht Ocean Watch.  When Herb McCormick of Ocean Watch reached the marines and their NorseBoat moored to a beached ice floe, he stated plainly, “Even for Englishmen you dudes have to be out of your bloody minds.”

Waiting patiently for the marines to land at Cambridge Bay was Tom Livingston, a water engineer working in the arctic and, as unlikely as it seems, another NorseBoat owner.  I had met Tom and his son Logan last winter on their way down to a two week adventure in the Everglades on their preowned NorseBoat 17.5.  I told Tom about the upcoming expedition and he enthusiastically offered to solicit community support and help with logistics.

True to his word, when the marines made Cambridge Bay on August 22 Tom met them, hauled their boat out of the water with truck and trailer, dropped their gear at his home and gave them just enough time to clean up a bit before sweeping them off to the weekly BBQ.  Tom’s assistance was invaluable.  Among other things, in Gjoa Haven he arranged for the welcoming committee, hotel accommodations and the loan of a shipping container for storing the NorseBoat.

The marines clearly enjoyed their four days in Cambridge Bay.  From their blog of August 28:

“The hospitality was incredible – never have we experienced people so willing to help two total strangers who arrived in their small boat.”

During the 250 mile journey to Gjoa Haven they once again encountered contrary winds that stalled their progress.  When the winds did change to a favourable direction they were strong, and the marines had some of the most challenging sailing of the entire trip.  At one point a freak wave hit the boat and snapped the tiller, drenching Tony in the process.  Resourceful in the face of adversity, the marines let the boat sail downwind under foresail while they redrilled and bolted the tiller back in place.

The two adventurers had wanted to go further, but they were content to end their journey in Gjoa Haven, at least for 2009.  And what a good place to end.  Taken from their blogs while in Gjoa Haven:

“Again we are struck by the warm reception from everyone.”  “As we prepare to leave Gjoa Haven…, we look back on a very special weekend spent in the company of very generous hosts.”  “…the Nunavut hospitality has been amazing.”

I’m both relieved and sorry that the Arctic Mariner expedition is over.  For me it was a rollercoaster ride of excitement and anxiety.  My reward came at the successful conclusion of their voyage, when in their final blog the marines wrote of their NorseBoat:

“Arctic Mariner has been our home for six weeks, and she has been superb.”

Read more about Norseboats via the home profile page.