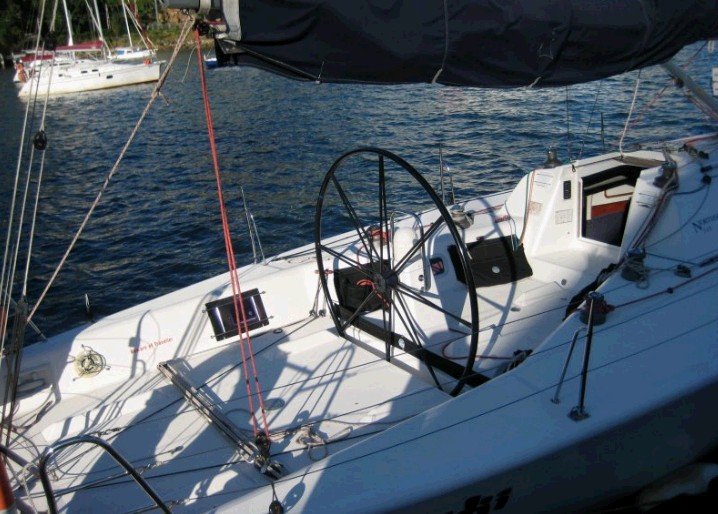 Yachts like the Northshore 369 could not have existed five years ago. Can I get away with a flat statement like that?I think so. This newest boat from the Sydney-based company represents a coalescence of many factors, including the growth of the IRC rating system for measuring, and thus comparing, the performance of offshore race yachts.

This growth has come at the expense ‘ in Australia, at least ‘ of the grand prix IMS system, which represents to most boat owners too much money to get in to and too much to keep up with the technology. The experts seem to agree that IMS is a good system, but IRC is catching on, because old-fashioned values are not discouraged.

IRC is a benevolent dictatorship you send your boat’s details to England and back comes your handicap figure. You are thus free to choose the level of technological complexity that suits you. Even Formula One motor racing is undergoing legislation to limit the amount of technology the factories can use, because only the top teams can afford unlimited development.

Modern yachts are, generally, getting healthier. Ballast ratios are slowly increasing, superlight-displacement is not essential and hulls have long since stopped being deformed to beat the ratings. The result is easily driven hulls that do not need clouds of sail to push them through the water and do not need ultra-exotic hull materials to save the final few kilograms. Add healthy, runner-less rigs with non-overlapping headsails and things are looking pretty good. Because things are simple and logical, these boats are easy to sail.

Designer Scott Jutson adapted Northshore’s 370 Sports hull (which he designed) for the 369. The keel is new (and deeper) as is the rudder. A new deck, with rolled gunwales, was specified. The cockpit is bigger and layout below decks is less elaborate. The mast is set slightly further aft than on the 370 to put a little more area into the headsails, but ‘the rig is user-friendly for a broad range of people’, says Northshore’s Jason Rowed.

The point of vanishing stability, the angle from the vertical at which the hull stops resisting rollover is 126.8 degrees i.e. 36.8 degrees below the horizontal. The minimum for the Sydney-Hobart is 115 degrees (Memo to myself: If my yacht reaches 126.8 degrees make sure you are not aboard). This stability is reflected in Jason’s claim that the boat will carry full main and No.4 headsail in 30 knots of breeze.

‘The deck layout was designed by professionals to make it easier for the clubbies to use’, says Jason. ‘People ask why we have the big wheel, but it is actually easier to use than other systems. The helmsman has something substantial to hang onto, you stand well to windward and can see the jib and the waves and you can steer with two fingers’.

This simplicity ‘ and stability ‘ means you can go twilight racing with a crew of two, which also means you and the missus can cruise without crew. You will need six for Saturday racing. ‘But if you are going to try to beat a Sydney 38 on IRC, you will need eight’, says Jason.

The backstay is a 64:1 tackle system, simpler, lighter than hydraulics and giving a constant visual reminder of how much tension you are using. Northshore have drawn up a set of rules for one-design racing and have organized one-design regattas for Sydney and Pittwater.

The restrictions are not too onerous; you are allowed only three new sails per calendar year, and there is no restriction on material because ‘material such as carbon lasts longer and holds its shape better’, says Jason, and restrictions may represent a false economy.

For class racing there is a restriction on professional crew and the owner must steer. The 369 is an 11.2m hull with beam of 3.721m and draught of 2.49m, or a bit under 8ft. The keel is a stainless steel fin with a lead bulb. In profile it is of the inverted T-style (where the bulb projects both sides of the fin) as opposed to the J profile.

Below decks you will find a quite stylish saloon and fit-out. The test boat had double berths in the bow and portside aft of the saloon, with single berths aft on the starboard side plus the settees each side of the saloon. The dinette lowers for more sleeping space.

AFR Midnight Rambler was given lifting settee backs to form height-adjustable pipecots, while other owners have opted for three double berths. There is a separate enclosed toilet/shower in the forecabin area, a twoburner stove, sink and icebox. Our boat was neatly finished in white, with teak trim and a dark blue fabric.

Two angled spreaders support the Whalespar mast. The vang is a Selden gas strut and the deck gear generally Harken, with self-tailing primary winches. Lines are led through Spinlock clutches. The cockpit is set up in supremely logical fashion, easy for all to use. The wheel is well forward, so guests can loll about behind.

The mainsheet is split and led back both sides to winches either side, just ahead of the wheel. The helmsman can easily trim the main when sailing short-handed. ‘In 10-12 knots of true wind we have a target upwind boat speed of 6.8 knots, 7 in smooth water’, says Jason. And so it proves. In a low swell with surface slop boat speed climbed easily through 6.6 to 6.8 in 12 knots of breeze, but that 12 knots was a peak reading and the breeze lacked punch.

Scott Jutson has set up the boat for neutral helm to avoid the unnecessary drag caused by a rudder’s positive angle of attack and indeed the boat almost steers herself on the wind. She is easy to helm as the longitudinal moulded foot supports are big and supportive, vital on a boat with wide cockpits. The rolled side decks are comfortable for the crew.

The Northshore 369 has a solid, no-nonsense feel about it, which is purely subjective, but it is quite tangible. It makes a lot of sense for the club racer whose ideal week would include a weekday twilight, a Saturday around-the-cans and a Sunday family cruise.

At the other end of the scale Ed Psaltis and Bob Thomas, winners of the infamous 1998 Sydney-Hobart on AFR Midnight Rambler, sailed their new 369 (of the same name) in the 2002 Sydney-Hobart and finished 18th on both IRC and IMS, averaging around 8 knots.

The owners were happy with their result on the boat’s first major event. The 369’s concept is a logical one. Long  distance cruising is an illusion for most people; it is very difficult to make it happen. Long-distance ocean racing is masochistic. Spending long periods of time on board is also a thing of the past for most families. So it makes sense to race a little and relax a little, without demanding too much of time and assets. And if the Missus is happy with her Sunday cruise and also happy that the old man gets out of her hair to race she will be happy with the purchase.

The price is not painful. The standard boat, anti-fouled and launched, is $260,000. What Jason calls ‘a good club package’, including hot water, cockpit shower, a wardrobe of Mylar sails (main, three jibs and all-purpose kite) B&G electronics, some safety gear, runs to $289,000.

A top-line fit-out should not exceed $300,000. So an owner can play near the cutting edge without paying a ludicrous price in this locally designed and built 37 footer, which is manageable in every sense of the word. Healthy.