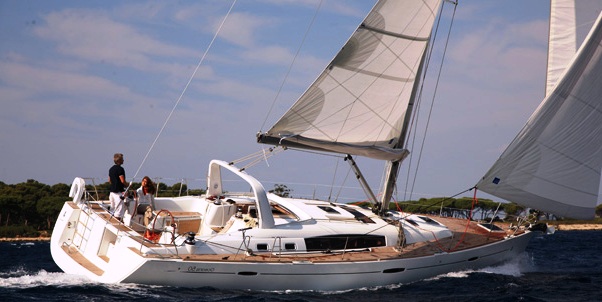 A couple of years ago a Beneteau spokesman explained to me that the company needed to introduce its Cyclades line of entry-level cruisers because the existing Oceanis cruisers were too well-equipped to match competitors on price. The Cyclades were designed for charter/cruising (the Cyclades 50 has four cabins and four heads) and relieved the Oceanis of the responsibility of filling both roles, thus freeing the designers to redefine the Oceanis as a pure cruiser. Beneteau gave the Cyclades design job to Bennet Racoupeau, the architects charged with redoing the Oceanis range.

This Oceanis 50 heralds the new style and is followed by the 40 and 46 released recently at Cannes. A 43 will follow soon. These boats constitute the fourth generation of Oceanis yachts. Bennet Racoupeau have done the naval architecture. Nauta Design have done the interior styling, which is contemporary while retaining familiar Oceanis features, including timber trim up to the deckline.

Bennet Racoupeau has seized the Oceanis commission with both hands. This 50 looks contemporary and the hull shows the influence of the Open 60s (which look like aircraft carriers from above) in that the beam at the transom is massive – the hull tapers only slightly from the point of maximum beam. The long waterline helps create massive internal volume, though this boat is narrower than the Cyclades.

The sail area/displacement ratio of the Oceanis 50 is appropriate for a modern cruiser and lower than most cruiser racers, but if the breeze gets too light the 100hp Yanmar is there to help. But our test sail was on a windy day and we got strong performance figures. You could twilight race this boat if there’s a breeze.

LAYOUT
The Oceanis has three cabins,the owner’s cabin in the bow with en suite bathroom, and two cabins in the stern. The starboard aft cabin has an ensuite with the day head and has more floor area than the port cabin, so it is a better place to be unless the bloke in the portside cabin has a prostate problem. In smaller boats, three cabins can mean a sacrifice of stowage room, but this 50-footer is big enough to have two short but full-depth lazarettes in the stern and another in the bow, the latter with a ladder for access and shelves either side. The designers have settled on a twin-wheel confi guration and a nice drop-leaf cockpit table/console. The primary winches (Harken No.53s) are mounted immediately ahead of the steering positions so the driver can winch if he/she wants.

The mainsheet traveller is on the coachroof – control lines run to Harken No.44s on the coachroof. The test boat had a comprehensive dodger/bimini setup which is the best I’ve seen. The dodger keeps the wind off but can fold flat if you wish. The bimini is two-piece on which the forward panel rolls back leaving the aft panel as a sunshade. We didn’t clip it up right, so in the pics it looks unnecessarily messy. Sorry.

The Sparcraft mast has twin raked spreaders and single lower shrouds. The cap and lower shrouds lead to the same chainplate on deck, set inboard from the toerail, which should help the jib entry angle, the boat’s pointing ability and ease the passage forward when the boat is heeled. The shrouds are tied by a strut into the hull’s structure. The keel is a cast-iron fin with a thickened bulb. A spinnaker pole track is provided, but Nicholas from Vicsail says the importers are doing carbon prodders, which slot into the existing bow fi tting to handle an asymmetric spinnaker/reacher. The Yanmar has shaftdrive. The standard prop has three fixed blades – this boat had a threeblade Max-Prop.

ACCOMMODATION
The master cabin is spot-on – island double bed (easy to make as you can stand either side) with a great mattress, resilient but firm. Stowage is excellent. The bathroom’s standout feature is the semi-circular shower screen, a tinted/clear panel like a half-cylinder that rotates. You step into the shower and rotate the screen around you, keeping the splashes where they ought to be. The aft cabins have huge headroom and good stowage. The saloon styling is quite architectural, squared furniture and cushioning, a bit like the style Hanse yachts have made their own. Trim throughout is in a lightened teak veneer up to the deckline, superb mouldings above.

The galley’s a beauty. The twin sinks are mounted against the companionway so the cook has support while standing in the narrow walkway. There is more worktop than any boat I’ve been on recently. There are two fridges, one top-loading (with a freezer compartment), one front-loading. A three-burner stove is standard – ours had four. The switch panel alongside the navigation station is comprehensive but simple to operate. No modes to memorise, everything clearly marked and logical to use.

When we stepped aboard our boat, the Beneteau guys had the genset and the aircon running and the machinery generated only a remote hum. The genset was a bit noisier in the cockpit but from the boat in the next marina berth you could hear only a murmur. You could run this unit anywhere without upsetting anyone.

SAILING
There are two schools of thought when it comes to sail-testing. A medium, steady breeze is best to help you come to grips with a new yacht, but a blow shows you quickly how it will handle under pressure. But a cruising yacht should never be placed under pressure. A good skipper avoids pressure on boat or crew. In my limited cruising career, comfort was the most important factor. If the coffee was likely to spill we either delayed our departure or reefed early.

We had a funnelling breeze pushing us onto our marina arm but the optional bow thruster got us off without drama. Without the thruster we would have had to resort to tricky stuff with the mooring lines to swing the bow upwind. Out into a stiff nor’easter. We had rolled back the front panel of the bimini but it was difficult to see the main and the gusty, swinging nature of the breeze made it hard to come to grips with an unfamiliar boat. The only sure way to steer upwind was to settle at the leeward wheel and let the telltales on the headsail show the way.

Under full sail we saw 7.2 knots upwind in 21 True, 7 in 15 True with the sails strapped in, but really it was time to reef as we must have had gusts up to 25. With the mainsheet traveller eased a bit and the jib fl attened she went as fast and pointed higher. The instant sheets were sprung she took off, those broad after sections doing their work and generating power. On a deep reach we saw 8.2 in 14 knots, on a tight reach we saw our best speed of 8.9 knots. Windspeed was up and down like a… no, I won’t say that. It was up and down so fast it was hard to read so the wind speed numbers may not be accurate, but there was certainly plenty of it.

Boatspeed was courtesy of the GPS, so was measured over the ground. On the wind in gusts of 25 knots she needed a firm hand but there was always wheel in reserve. This knocks me out about these beamy modern hulls. The beam provides lateral stability and power, yet directional stability isn’t affected. This boat carried the standard factory headsail, a little bigger than a No.2. The steering was quite firm (some twin-wheel setups are) but the steering did not load up to a great degree.

Our boat had one electric winch, on the portside coachroof for the halyard and the mainsheet. The primary winches were up to the job in a windspeed where headsail area should have been reduced. If I could winch the headsails home, anyone can. The owner of this boat will fit electric headsail winches.

The owner of this boat is a serial Beneteau buyer. He keeps them for an average of three years then sells them on. This boat will cruise and it was scheduled to leave for New Caledonia two weeks after our sail, then return later in the season when the weather cooks up and the cyclones get frisky. The 50 is a comfortable boat. The beamy cockpit has good handholds and you can brace yourself against the table.

The galley is seamanlike and the refrigeration is easy to use. The saloon is a stylish place to be. All the details are there – blinds and shade screens on the hatches, plenty of headroom, excellent stowage. Suction cups are provided to lift the fl oorboards, a great idea but defi nitely a Hanse original. And the price is right. Base boat is $575,000. This boat with a long list of extras including genset, two aircon units, bow thruster and teak decks, was around $670,000. This is a nice boat with a straightforward design brief, less compromised than some of the older Oceanis craft. It is not complex or gimmicky but it is stylish (both above decks and below) and you could spend long periods
aboard in comfort.

In the galley are two signature Beneteau features – the lift-out dustpan set into the floor, and the rubbish bin with an automatic lifting lid set inside a cupboard door. When these first appeared on a Beneteau, more than 20 years ago, it was a sign that the production yacht had taken a big step forward. The blokey concept of tough cruising had gone forever.