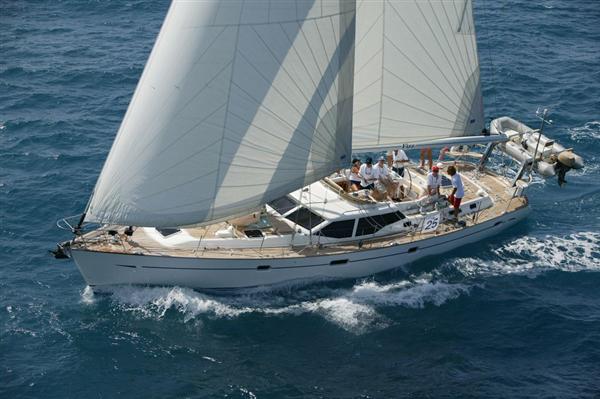 For decades Swan was the most revered of yacht builders. The Finnish boatbuilder – who had initial British input, and is now Italian-owned – became renowned for classy, quality cruiser/racers.

And then along came Oyster to challenge for the title of Most Desired Production Yacht. Founder Richard Matthews set up shop in Britain in the 70s to build a mix of cruisers and racers. Matthews has always been a top-end racing man – he captained Britain’s ’97 Admiral’s Cup team, was chairman of the ’95 America’s Cup challenge. He won Britain’s IRC Class I championship for 2000 in a cutting-edge boat of Oyster construction.

The Oyster genesis shows the gradual shift of the range towards the cruising end of the yachting spectrum, though a limited-production racer would occasionally pop up. Now the range is almost entirely centre-cockpit (there is one exception) heavy-displacement bluewater cruisers. All models – from 42ft to the new 100-footer – feature variations of the Oyster trademark pilot-house style, where the saloon windows are notched into the superstructure.

As we’ve written more than once recently, all major European yacht builders now include at least one pilot-house model in their lineup. Oyster can’t claim to have invented the pilot-house style, but they have certainly made it their trademark.

The popularity of the Oyster philosophy is reflected in the 2001 ARC (Atlantic Race Cruise) where the entry list featured more Oysters than any other manufacturer, significant because these are prestige boats and are not cheap. After the ARC, 33 Oysters gathered in Antigua for the inaugural Oyster Week Antigua, again echoing the Swan experience of involving the owners in regattas.

Oyster’s design philosophy and emphasis on quality of construction and fitting-out has been rewarded – the parent factory in the UK has a waiting list of up to four years for some models. The company has done a deal with Auckland company McDell Marine to build Oysters, under Oyster supervision and to Oyster standards and now McDells do the 49, the 53 shown here, and the new 60.

For the Oyster 53, designer Rob Humphreys produced a relatively heavy hull (22,250kg) with a bulbed keel and draft options (1.83 or 2.2m). Humphreys has had a lot of success with production boats and with designs ranging from sports 22-footers to Open 60s to Chay Blyth’s FT fleet of steel 72-footers, which raced uphill around the world.

The Oyster features a cutter rig with removable inner forestay. North South Yachting’s Ralph Hogg recommends using only the high-cut genoa for closed-water use and improved forward vision and the twin-head rig at sea. He reckons the 53 has proved able to work to weather in more than 50 knots of wind under the staysail and reefed main.

Most cruising crews are husband and wife teams, so a bluewater cruiser has to be easy to handle. The rig of this 53 has electric winches for halyards and sheets. The result of this mechanisation is that sailing becomes a total joy, almost as lazy as powerboating, but without the noise. Such joy comes at a price, but if you’re shopping for a boat around the $2 million mark the cost is not relevant. Top-end buyers demand this sort of easy of handling – it is not an option.

Ralph Hogg tells me the hand-laid hull is massively built incorporating glassed-over stringers and hefty structural flooring. Fuel and water tanks are fibreglass and integral with the structure, to add strength. Lacking anything more scientific, we measure the internal bulkheads between thumb and forefinger; we estimate they are between 30 and 40mm thick.

The Oyster people offer quite a lot of flexibility in layout, but their beautifully-produced catalogue shows the two most popular – the one shown here, with double-berth cabins in bow and stern (the owners have the stern cabin) plus two cabins with stacked double bunks.

The other layout shows the master cabin in the stern, a double berth cabin on the starboard side forward of the main saloon, and the two double-bunk cabins. The forward bathroom moves to accommodate the variation.

Long-distance cruisers choose to use one of the double bunk cabins as the workshop/machinery room, as they don’t need eight berths. The galley is in the walkway on the starboard side connecting the master stateroom and the saloon. This means the galley is buried deep in the yacht, but this is offset by the advantage of having a narrow working area for the cook so he or she can easily brace when the boat is heeled or during rough weather.

The dinette is almost semi-circular, but the large table top is doubled and can fold out across the walkway so extra guests can be accommodated by the seats on the port side. The boat can sleep eight, so it makes sense if eight can eat at the saloon table. And keeping them clean should not be a problem. This boat was fitted with a clothes washer/drier – toss in the dirty clobber, press a button and your gear comes out clean and dry.

The trim on the test boat is in American white oak, with the fabric trim in suede-like alcantara. Teak and cherry are optional, and presumably other trims can be had by negotiation.

For what it’s worth, I like the oak. It is light in colour; the oak grain reminds you that some of the world’s finest furniture is built of oak and it has a warm and folksy characteristic other timbers can’t match.

The quality of the fitout is exemplary, as is attention to detail that has obviously been paid during the Oyster’s manufacture. The rich are extremely fond of attention to detail and its reflection of quality. For example where a large span of wall-panelling is necessary – as on the bathroom wall in the master stateroom – the builders include shadow lines to please the eye.

The Oyster pilothouse arrangement includes opening windows, which is great for ventilation. You have to stand in the saloon to be able to see out, in contrast to the Aussie-built Farr 51 Pilot House, which has a stern cockpit and comparatively higher floor.

North South Yachting’s price list carries a postscript: “Yachts from the 53 upwards offer an infinite range of custom possibilities. Please ask for advice or a proposal based on your ideas.”

Out on the water we idle off the dock straight into light nor’easter. The 100hp Yanmar diesel can only just be heard, but the boat absorbs all vibration. 100m from the dock the skipper lifts a remote control unit from its position on the steering pedestal (it’s not fully-remote – it’s connected by a cord) presses a button and the Doyle Fraser main rises majestically and silently from the impressive Profurl self-stowing boom. Then he presses another button on the remote and sheets in the main. Now we are sailing.

Unfurling and sheeting the genoa demands a finger from each hand, one to unroll the furler (the button is on the steering pedestal) and one to press the winch button (on the coaming side) to sheet in. Now we are sailing faster.

So far the skipper has done it all without leaving the helm area. Someone goes below for beer. Everyone else is sitting comfortably, in the cockpit or in the pushpit seats or on the beautiful teak deck aft, gazing at the scenery, completely unaffected by the boat’s transition from motor to sail. All the noise, all the effort associated with getting a big yacht under way, is gone.

Seven knots in 16 knots of apparent breeze at 60 degrees. Bring her up 10 degrees and we have seven knots in 17.5 knots of wind at 50 degrees. Heel is minimal. The 53 shows the potential for generating serious power; she produces a sensation of momentum, not the same as simply going fast, of a powerful sailing machine settling down to the task of converting wind energy into effortless, quiet, forward progress.

No matter what fashions dictate, no matter how much the technology diminishes the risk, the sea remains a demanding place. Top-end British yachts tend to be more seamanlike than those of other nationalities, by which I mean the details which help make a boat more seaworthy than the one in the next marina berth have not been sacrificed on the altar of fashion.

But the Oyster 53 is beyond fashion. It brings together seaworthiness, high style, comfort and security, a reassuring combination if you are taking that most adventurous of gambles and heading into the great unknown.

The test yacht’s price is around $2.1 million including the 7.5kVa Westerbeke generator, bow thruster and washer/dry.