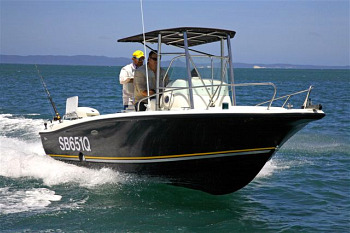 American influence, Japanese design and a Chinese hull makes an impact on Aussie centre console fans.  With its ‘hipped’ Hatteras-style sheer line, the boat is a good looker.

Under-floor storage is an attractive feature of this hull. There’s plenty of fishing room in front of the console, with a hatch to a big fish box under the deck and ample drains.  The 175hp Evinrude E-TEC pushed the hull to a maximum speed of 38 knots.  Shurflow deckwash is standard.

A 6.5m centre console has limited appeal in Australia, but if you are looking for a big capable console, you should check out the Oz Venture 650.

Conditions on the day of the test on northern Moreton Bay, off Bribie Island, were as bad as can be to test a centre console, but it highlighted two things about this boat:

One, with a substantial wind chop generated by winds gusting well above 20 knots at times, the Oz Venture 650’s hull showed itself to be a remarkably soft-riding and dry boat for a centre console. It dealt with the kind of conditions you’d cancel any fishing trip over remarkably well.

The second point was that given enough wind coming in on either bow quarter, it really doesn’t matter how good a centre console’s hull is or where it deflects displaced water, strong enough winds will blow spray inboard. But such are the facts of life in these types of boats; there’s no such thing as a dry one. The only truly dry boats are those with superstructure to hide behind. This one, however, is as dry as centre consoles get.

The Oz Venture 650 has an interesting background. It looks and performs very much like an American import and the influence of the big centre consoles so popular over there is undeniable. But the hull is built in China from a Japanese design and is sold across Asia under several brand names unknown here.

Japanese design or not, the hull is a sophisticated shape underwater, featuring a variable deadrise, turned down chines, and a heavily flared bow. Internally, full use is made of contemporary GRP technology including vacuum bagging and closed cell foam sandwich construction to achieve a strong lightweight hull.

Australian importers and distributors Oz Venture bring the hulls in, power them exclusively with Evinrude E-TEC outboards, set them up on dual axle, multi-roller-style, hydraulic braked trailers, and complete the fit-out. Also, the hull has a 2.26m beam making it legally trailerable on Australian roads without special permits—worth noting because more imported boats exceed the trailerable width for Australian roads than is commonly acknowledged.

For the $65k quoted for the test boat, the fit-out is complete and includes a sounder/GPS and marine radio, interior and navigation lighting, hydraulic steering, and bilge and deckwash pumps. Following its obvious American influence, there are numerous interior mouldings and aft there’s substantial stowage space below a wide lounge seat against the engine splashwell.

This lounge may not find favour with some centre console devotees, occupying as much deck space as it does in a very important area for serious fishing. You’ll make up your own mind and, admittedly, it has something to offer socially.

Belowdecks there are two big fish boxes, one in the cockpit and another in the bows and there are two iceboxes, or rather one mid-sized drinks and food icebox built into the impressive centre seat arrangement that has space set aside for a second fishing-sized icebox underneath between its supports. Aneat seatbelt to keep everything in place is a worthy detail.

The deck itself self-drains through open scuppers each side fed by deep channels off a moulded non-slip surface. Typical of boats with a moulded interior, the 650’s side decks don’t overhang, so toes-in-under leg support on rough water isn’t the best.

Beside the helm there’s a big door accessing the console’s interior, which can be fitted out with a marine toilet and interior trim.

Thanks to the console’s size and a large screen between the bimini top’s supports, the lee side of the console offered worthwhile shelter from wind-blown spray. With three people aboard there were also plenty of rails and supports to hang onto while travelling. The helm seat is a well thought out arrangement somewhere between a seat and a leaning bolster that works very well. These are important features often missing in centre consoles.

Due attention has been paid to anchoring arrangements, too, with a well in the foredeck big enough to hold offshore quantities of anchor warp behind a moulded bowsprit and fairlead leading to the massive bollard necessary to secure a 6.5m boat. The low, stainless rail is nicely divided in the centre to facilitate anchoring duties and there are separate smaller stowage compartments set into the interior moulding in the bows.

With a 175hp E-TEC powering it, the boat really took to the task. We did our best to hide against Bribie’s southern shoreline to escape those gusty northerlies and, with three adults aboard when running performance figures against the official GPS, the boat recorded a top speed of 38.4 knots.

The hipped sheer line makes the Oz Venture 650 a good looking boat sure to appeal to anyone looking at a big centre console.