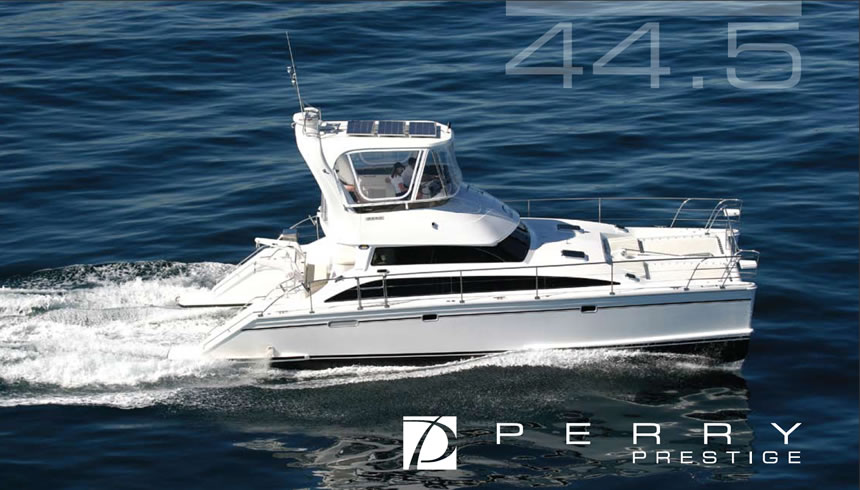 Experience The Difference – Here’s a 44-footer that can go 770nm without refuelling.

Step onboard Bryan and Robyn Larkin’s Perry 44.5 Passagemaker, appropriately named Larki’n About, and two very enthusiastic owners greet you. Why ? Because after owning many powerboats, all of them mono-hulls, Bryan now has his ideal boat, and Robyn found it for him.

A couple of years ago the couple went to the Sanctuary Cove International Boat Show. Bryan met up with a mate and as mates do, started to talk man-talk. Robyn wandered off, as wives do, and found herself at the Perry exhibit.

There sat the Perry 44.5, and Robyn loved it. Perry makes no secret of the fact its cat’s have a certain feminine appeal. Women love the spaciousness of the cabins, the big galley, the bathroom with a serious shower cubicle and the laundry. Not to mention the huge living area of the main cabin and the way the whole boat can be opened up to let the air flow through.

The Perry 44.5 Passagemaker is a boat a family can live on comfortably for an extended cruise, without falling over each other. It’s the ideal boat for the Larkin’s who have six-year-old Matthew, grown up children and grandkids.

When Robyn finally managed to extricate Bryan from his mate and steer him in the direction of the Perry, it was the start of a life long love affair. This from a mono-hull man who wasn’t going to own a catamaran for love or money. But seeing this boat changed all that.

“I took a photo of it, put it on my computer as a screensaver and said I am going to buy one,” recalls Bryan.

“It’s not often you get a product that does what it says,” he states, easing his Perry 44.5 powercat out of its berth at Hope Island to cruise down the river to the Broadwater and out to the Seaway.

Builder Bryan Perry was also onboard, but he didn’t have to say much. He couldn’t have two better ambassadors for his product than Bryan and Robyn. The couple is unashamedly ‘in love’ with their new 44-foot boat.

The construction of the cat is exactly the same as the 43-foot sailing version, from the gunwales down. The hull shapes have the Perry-designed full bow which display characteristic buoyancy and sea-keeping qualities. And the interior layout is the same. After all, why change something that already works ?

LAYOUT
But from the deck up it’s all new. The flybridge is huge ! We had seven people on top and there was still plenty of room. With the stability of the two hulls this number could be doubled safely. In fact, the whole boat is licensed to carry 35 people, plus two crew.

The helm station is located forward on the flybridge and has a good view of the four corners of the boat. The boat is powered by two Volvo Penta D3 diesels running through ZF V63 drives. They are bigger than the boat needs, but the next size down is a little too small. Perry has also installed Morse KE4 electronic controls that are smooth as.

Cruising into the wind at 16kts the readout showed a fuel usage of 17.9lt per hour for each engine.

At full speed of 21 knots at 4000rpm, the engines were using 34lt per hour each, which equates to around 1.8lt per nautical mile. The boat carries a 1000lt fuel tank with the provision for another two 400lt long-range tanks.

A sister boat has already gone to Sydney and back on one tank with a quantity of fuel left over.

While the boat will take on all but the roughest seas at about 16 knots comfortably, “there is a downside,” says Bryan, “the boat won’t do 30 knots”.

But then customers interested in a Perry powercat only want a boat that does around 16 knots. Parking is no problem. With the engines located out wide in each hull, the boat manoeuvres easily and two people can handle it without drama.

PERRY CATAMARANS
A Perry 44.5 has completed the 770nm passage from the Gold Coast to Sydney and returned without refueling.

Perry Catamarans’ marketing manager, Keith Cogzell, also said that during a recent passage from the Gold Coast to Sydney, it was so rough that some larger mono-hulls near the Perry headed into shelter. They couldn’t maintain 9 knots, while the 44.5 was doing 12 knots and handling the weather superbly.”

“Sailing catamarans need hulls that are easily driven, carry the right amount of buoyancy in the bow and stern sections, and are very seaworthy,” says Bryan Perry. “By carrying these proven features of the 43 into the 44.5 powerboat we have a design that needs very little power to propel it comfortably. Our boats are fitted with twin 160hp diesels while a similar sized production monohull, that is capable of only a few knots more than our design, has two 490hp diesel engines doing the pushing. That’s a lot more horsepower.

“Put simply, you can get near three times the distance on a full tank of fuel with a Perry 44.5 at a similar speed.”

PERFORMANCE
With three people onboard the Perry 44.5 produced these performance figures: