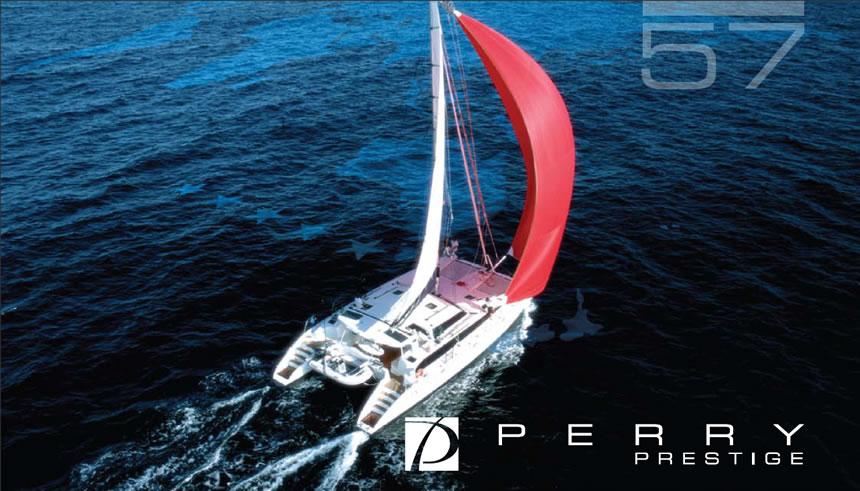 Smooth Sailing – More and more sailors are jumping on the multi-hull bandwagon.

Having an ocean racing background, I, like most mono-hull sailors, looked at multi-hull sailors as being a bit different to the rest of us. But after sailing the Perry 57, albeit only for a short cruise, I’ve changed my mind. Multi-hull sailors might just be onto something.

I now know why multi-hulls are so popular for cruising ? not just as sailing craft, but in a power configuration as well.

The big advantage of multi-hulls is they sit flat on the water and don’t heel over like a mono-hull. After a few days of sailing on an angle, you do get sick of it! Simple things like putting on a wet weather jacket or brewing up a cup of coffee on the stove become an effort. But not on a stable catamaran like the Perry 57.

EASY SAILING
The Perry 57 is a ‘gentleman’s and his lady’ cruising boat and, although it’s a big boat, two people can sail it comfortably. Sail handling is made simple by the use of electric, self-tailing, primary winches, in this case Harken 64s.

The boat will sit comfortably into wind as the sail is hoisted at the touch of a button. Dropping it is just as easy. It falls down between the lazy jacks onto the boom where it’s easily stowed in a bag that sits the length of the boom.

Perry has chosen to re-introduce a version of the original Park Avenue boom. This is a frame on either side of the boom the sail sits on so it doesn’t spill over the side of the boom onto the deck.

The fully battened main sail is full with a large roach, but it’s easy to handle with a large traveller running the width of the cabin top, which when let down to leeward, takes a lot of the pressure out of the main if needed. A Harken 53 is mounted in front of the helm station for the mainsheet and two Harken 44s are used for the traveller control lines. These lines can also be electrically operated.

The main sheet uses a racing system that runs forward to the mast end of the boom and through blocks to the boom end where it attaches to the traveller car. This keeps the end of the boom down with no need for a boom vang.

There are two headsails on self-furlers up front. One is a screecher ? a reaching sail used when the wind is on the beam or slightly aft of the beam ? and the other is a regular genoa.

The deck plan is simple and easy to use. All the halyards and reefing lines are led back to the cockpit through a system of turning blocks to well placed winches and a bank of serious jammers.

The 22.6m double spreader mast is also a Lambourne and is set up with a fair amount of pre-bend, making it stable and solid. The mast is probably a little over-rigged, but it’s there to stay.

The main helm position is on the port side with all the engine instruments and nav gear, with a second wheel on the starboard side. When the weather gets unfriendly a hatch with a window in the top can be closed over the helm station, so the driver can still see the trim of the sails and remain dry.

PERFORMANCE & HANDLING
With the wind coming from aft of the beam we set off down the Broadwater. The steering was amazingly light and the boat just sat there tracking straight at 11.5 knots in 22 knots of apparent wind.

The ride was so smooth a pile of CDs left sitting on the bar in the cabin didn’t move the whole time.

When it came time to turn around the screecher was furled in and the boat put head to wind to drop the mainsail. To my surprise, it went head to wind like a monohull and just sat there, patiently, as the headsail came down.

The boat is powered by two Yanmar 4JH3-DTE, 125hp, turbo diesels with shaft drives installed in each hull.

The twin Yanmar diesels were started and we motored home into wind at an easy 10 knots. At this speed the Yanmars use 12-13lt per hour, so the 3000lt of fuel gives the boat a cruising range under power of around 1200 nautical miles.

In the cabin with both engines running, the noise level was a comfortable 78.5dB, making it easy to have a conversation without having to raise voices to be heard.

RAISING THE BAR
When Perry Catamarans launched its 57-foot cruising yacht, the bar was raised across the entire sailing market in terms of luxury, accommodation, spaciousness and sailing performance. The Perry 57 Catamaran is a development of the very successful Perry 43, which is a design still cruising the world’s waters.

Step onboard for the first time and there is immediately a ‘wow’ factor. This is fivestar luxury: the timberwork and plush furnishings make an impact and the size of the main cabin (28 feet across) is truly impressive. It’ll take your breath away.

The fit-out is so well done and is such a fine example of the boat builder’s craft that you’d be hard pressed to find a better presented sailing craft of its size anywhere in the world, including those built in France.

For overnight stints there are two large queen-size island berths, plus an aft cabin with twin berths that can be converted to a large double berth.

There are two en-suites and a large bathroom that three friends could shower in. There are no worries about running out of water either, due to the onboard desalinator.

The galley is as good, if not better, than any found on larger luxury cruisers and has all the necessary appliances. For extended cruising there’s a laundry with a washing machine and dryer, not tucked away where they are hard to get at. It’s as big a laundry as you’d find in many highirise apartments. Outside the main cabin is a large, sheltered cockpit which is the perfect place for entertaining.

Bryon Perry, a fourth generation boat builder and catamaran designer, has built a lot of volume into the bows of the boat.

Most cats are fine in the bow and tend to steer by the bow. While the top speed drops a few knots, the design is easier to steer and is more comfortable in a seaway.

The boat is built for cruising and not outright speed, so the loss of a few knots doesn’t matter. The Perry 57 Catamaran is the largest production multi-hull currently built in Australia and its sleek styling and superb finish make it a showcase of the exceptional quality that can be achieved by Australian boat builders.

The Perry 57 is a long-range sea boat and needs the freedom of the open ocean to get the best from it. It has certainly changed my mind about cruising!

THE STORY SO FAR
The spirit of Perry spans more than a century. Four generations of shipwrights and quality boat building comes with the name Perry.

The success of Perry catamarans is largely due to Bryan Perry. Throughout his career he has demonstrated his ability to stay abreast of the times in design, construction and the latest in boat building technology.

In 2005, the prominent Australian investment organisation, Farallon Capital, formed a powerful alliance with Perry’s existing management so the company could move towards centre stage on the world market. The Executive Chairman of Falloran, Greg Nunn, had first hand knowledge of the brand and its international potential, as he was already the proud owner of a Perry 44.5 motor yacht.

This was a classic case of liking a product so much that you buy into the company!

+ Easy to sail; Overall stability
– Nothing to report