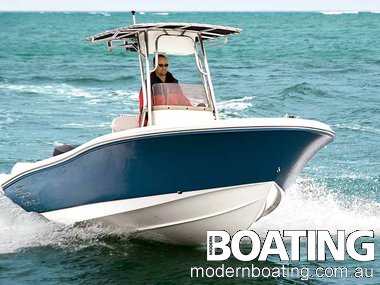 With a stable hull and lots of space, the Pioneer 197 suits all-day fishing trips

I am never sure of the right kind of weather in which to test boats. The really pleasant kind puts no stress on the boat, and you have to imagine or (this sounds more scientific) extrapolate its poor weather abilities. Go out in lousy weather and you find those out all right, but it’s hardly a realistic test: people usually don’t find much pleasure in being knocked around, so they don’t use their boats on those days.

On the other hand, I usually have little choice; drawing the line at cyclones, I simply go out on the appointed day. Which is how it was with the Pioneer 197. Twenty-two knots of south-westerly, with no reefs to impede development, pushed seas at us as soon as we poked our noses outside the heads at Mandurah. So this is not a story about a great day out. But it is a story about a pretty good boat that was in its element.

Like a high percentage of fibreglass boats on sale in Australia (although for how much longer?), Pioneer Boats are imported from the USA, but the company has several unusual features for a US boatbuilder. It is family owned, has a range of only six models in four lengths from 5.44m to 6.43m and, except for the largest, they all have beams under the magic 2.5m.

That’s significant, because many trailerable US-built boats have 2.59m beams, making owners subject to permits and towing restrictions. Of course most owners tacitly declare their boats’ beams as an honorary 2.5m, but you wonder how understanding the insurance companies would be in the event of a traffic accident. Four of the models are dedicated fishing boats, and in many ways they have a strongly Australian flavour. The reviewed Pioneer 197 Sportfish centre console, unlike many of its compatriots, feels like it was really intended for fishing in the open sea.

A whisker over 6m long, it combines a self-draining deck with reasonable freeboard, its coamings set above knee height and well padded. No guardrails, or grab rails other than the bimini T-top support, are fitted for those standing aft of the console, but the toe rails are well placed for security. With toes scrunched and thighs against the padded coamings, I withstood the rolling produced by a very sloppy sea.

Of course there is no compulsion to stand, and the 197 is pretty well fixed for sitting. The two seats in the quarters have removable backs, and here there are some good grab rails. In fact, anywhere you sit is well provided with handholds. The triple seat on the casting platform and the double on the 68L icebox ahead of the console share recessed coaming rails, and the helmsman’s seat-and-a-half has plenty of structural metal nearby to hang onto.
The review day gave abundant opportunities for seats and rails to prove their worth: the wind had been working on the sea for a good many hours, and a moderate swell was rolling through it. Although we never had the throttle close to wide open, the 150hp Mercury Optimax took us well up into the 20s, providing some lively movement.

Seas are always going to move boats around. More significant than total movement though are the accelerations and decelerations involved. The 197 had them nicely under control, delivering a very acceptable ride. The deadrise at the transom is listed as 18 degrees, not a fashionably sharp number, but it combines with a sharp and deep forefoot. And also, of course, with a driving position well aft that benefits from being further from the impact zone.
The moderate V plus 130mm chines come into their own once the boat starts drifting and basic stability becomes particularly important. Centre consoles place few limits on passenger movement, and twitchy versions make unhappy fishing boats. This is not one of those. There were only two of us available as organic ballast. However we disposed ourselves, we had the barest effect on the 197’s attitude.

STORAGE APLENTY
The Pioneer is thick with places to put things: inside the console, of course, under the bow platform, and under every seat. The radio is safe from the weather, and perhaps from casual thieves, in a box under the bimini which can also house other perishables and stealables. No side pockets, but that space is taken up by horizontal rod stowage. The only disappointment on the everything-in-its-place theme is provision for anchoring, and this is where the boat shows its heritage. Possibly little anchoring gets done the other side of the Pacific, but so many US boats put little technology into it. There is a lidded rope locker, though on the small side, but no bowsprit or other external spot to stow the anchor. There is no external bow cleat either, the only one forward being inside the locker, so it means you have to open the hatch when handling lines, with the risk of snagging the lid. On the other hand there are extra cleats amidships for spring lines, and all cleats above the deck are pop-ups.

A genuine offshore type specified the icebox-seat: a pair of heavy-duty turnbuckles instead of flimsy rubber straps holds it down. And an optimist designed the bait tank behind the driver?it is huge. But he also catered for large numbers of rods to be fed from it: three sockets across the seatback, four across the bimini, four more in the side decks, and six racks within the bulwarks.

In centre-console tradition, the windscreen is the soul of brevity, but it had to contend with little spray and the overall protection level was good. For the driver anyway. And he’s the one who pays for it all. The bimini covers a fair bit of passenger area too, and its support is reassuringly strong: safe to hang on to and rattle-free.

The console is neat, and the layout catered for my prejudices. I am as impressed as anyone by the endless digital readouts possible with the likes of SmartCraft, but I still find it an awful lot easier to read the important figures of revs and speed on an analogue gauge. The digital press buttons are still there for everything else.
There is another see-through lidded box on the dash, letting you mount your fish finding and navigational electronics under cover. A long-time belt and braces man, I like the idea of giving expensive items, even when badged as weatherproof, a second layer of protection.

POWER AND PERFORMANCE
Pioneer’s 197 Sportfish provides a pleasant driving experience. The driving seat was comfortable sitting or standing, and all the controls and gauges fell neatly to hand and eye. It was easy to get braced against boat movement and, in centre-console style, the vision could not be bettered.

What I was unable to do was open up and get a set of performance figures. All I can really say, as Rolls Royce is reputed to do, is that power was adequate. Or more than adequate: one of the indicators of that was response to power trim. The merest whiff of trim button set us up for taking the sea from different angles. And once set up, it was a reassuring drive. Downwind particularly was impressive, virtually hands-off.

Mandurah Outboards supplied the test 197, and some of the equipment aboard was from the options list. This included tackle drawers, swim platform, radio box, wash-down pump and bimini. These are all logical items, and it would actually be difficult to sell a boat at all in the west without sun protection. With this equipment level, it would be pretty much a matter of adding petrol and taking off.

There is much to like about this boat. There is a lot of rail length, and the stability allows friends to stand shoulder to shoulder at it. With all those seats, and with drinks and food in the icebox instead of potential catch, it would be an attractive day boat any time the family could prise it off the family’s fisherman.

DOLLAR WATCH
It all comes at an attractive price: $67,770 as tested. Or the examples currently in Australia are. They were imported when an Australian dollar was worth 95 US cents, so how attractive the price will stay with our sagging dollar remains to be seen. The moral, probably, is if you fancy an American boat, grab one now.