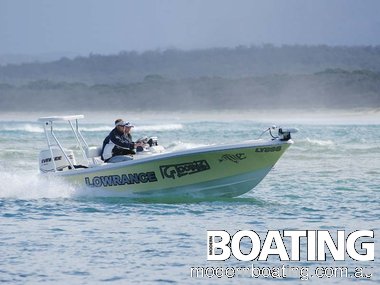 The past five years have seen a rise in the popularity of American-style, bass-fishing boats. I own one of these boats and I’m the first to admit that while they are unbeatable in estuaries, their versatility is limited.

Australians want a boat to skim through shallow waters, over sand flats and up small creeks; we want lots of raised deck-space from which to cast lures, plenty of storage below for gear, and neatly fitted rod lockers. We also like to troll for trout and impoundment barramundi. But most of all, we want to slip offshore and cast to tuna schools and surface kingfish, as well as drift the reefs with plastics for snapper. We want a boat that can both handle swell and keep us dry from chop.

The above wish list is a tall order for most boats to do well, especially those designed for just one role. I think the American bay boat is the closest anyone will ever get to producing the perfect inshore boat, and the best of these I’ve seen so far is from boutique brand name Pioneer, with its Cape Island 186.

With my new TV series ‘Adventure Angler’ covering so many different situations all around the country, I needed a truly versatile boat. The Cape Island 186 fitted the bill perfectly. It’s 18ft 6in in the old scale (5.64m in the new) and it’s a bay boat. The unique thing about bay boats is that they have a really shallow draft so they can both float on and travel across shallow water like a flats boat. The difference is, a bay boat has higher sides to keep out the chop.

In the case of the Pioneer, the bow of the boat has a pronounced Carolina flare that deflects spray. This is a seriously dry boat to drive, and when your cameraman is holding a camera worth more than a luxury car, keeping water outside the boat becomes extremely important. Everyone likes to stay dry, of course, yet dryness seems to be a rare quality in boats I test, particularly in those built locally, unfortunately. The Cape Island’s bow has the most flare I’ve seen on any of the US bay boats and it works a treat.

Where the bay boat concept really shines, however, is the way it lets you fish both shallow water and exposed water. The Cape Island has a draft of only 30cm, a measure paramount to anyone wanting to sight cast
the northern sand flats for trevally, queenfish and permit, southerners wanting to do the same for shallow water bream, and seasoned barra anglers fishing skinny water for barra on the flats. Its shallow draft means that the Cape Island ticks all these boxes.

To extend the boat’s shallow-water sight-fishing qualities further, I ordered my Cape Island with a polling platform, which is paramount to any northern flats fisher. I’ve seen some ugly polling platforms and some that look sleek and cool. The one Pioneer fitted is certainly the latter. From up top you can spot fish from a long way ahead. I use a G.Loomis push pole from up there. I’ve mounted one of the latest Watersnake Slider electric motors on the bow—an 80lb thrust, 24V system with a remote-control foot-pedal. The pedal reaches the polling platform, allowing me two modes of silent movement and the ability to crab-walk the boat.

The Cape Island’s deck layout is as close to perfect as I’ve seen—easily the best layout of all the bay boats I looked at when researching on the web. From the transom forward, it starts with the platform over the motor, then an engine well. There are two large storage boxes on either side of the engine well and a deep, oval-shaped livewell in front of it. Beneath the padded bench seat is a huge storage box or kill tank that runs the entire width of the boat and deeper than floor level. The bench seat comes with an optional padded backrest with swivel uprights that allow it to be stored out of the way easily.

Both gunwales are quite wide, allowing an angler to walk along them while fishing. Inside these are lockable dry rod storages. They feature storage for three rods each side with full-length tubes for the tips long enough to accommodate fly rods.

Up forward, there’s a large casting deck in between the floor and gunwale height with a huge lid and storage bin below. This deck also has a position for a swivel casting-chair. Forward of that is a large anchor well.
In the cockpit, the console is large and stylish yet leaves a large amount of walking space on either side. On the dash, I have my two I-Command gauges mounted and a Lowrance HDS 7 colour fishfinder/GPS combo unit mounted with a through-the-hull transducer fitted near the transom. On the port side of the console, there’s a storage door for access to all the space inside, which is extensive. I’m considering fitting a tackle locker for my Plano 3700 stowaways on the starboard side of the console. The Cape Island comes with an esky and padded seat that can be secured immediately in front of the console, which provides a comfortable seat for two.

The cockpit deck is self-draining, as are all of the storage areas. They drain through plumbed lines out of the transom. To make cleaning and removing blood easier, I opted for the high-pressure deck-wash.
Pioneer has a reputation in the US for building quality rather than mass-produced boats. They deserve their reputation. All of the fittings are just 316 stainless steel, but are strong and high quality. The cleats are all pop-up and the locking devices won’t jam after a month. You won’t find any composite plastic/metal fittings on things like storage latches on this boat—all of the fittings on the Pioneer are built to last.

POWER TO THE PEOPLE
I love my E-Tecs, so the choice was simple when it came to fitting an outboard to the Pioneer. The Cape Island is rated to 150hp, so that is what we went for. As usual, the motor is really quiet throughout the rev range. The E-Tec starts like a dream first time, every time, and the fuel efficiency is as good as a four-stroke, with loads more power to weight and torque.

I get a top speed of nearly 50 knots and cruise at 35 knots while the revs are 4200 and I’m burning just over 30l an hour—it sucks a frugal 0.7l/hr while idling. The 150 E-Tec gets the hull onto the plane really quickly and the 150 weighs in at 190kg. You could consider the newly released 130hp E-Tec with a weight of 177kg, but I like the 150hp on this boat. It goes like a dream and while I rarely run it flat out, running at less revs helps fuel economy and it’s always nice to have speed in reserve.

What I’ve found when driving this boat as opposed to the trim-sensitive bass boats is that I rarely trim the motor high on the Cape Island. In fact, most of the time, my I-Command gauges are telling me that I’m trimmed in to around 20 per cent on broken water and out to about 30 per cent when its flat. I found the hull wanted to jump around a bit if I tried to trim the boat out of the water much further, but my ride was both smooth and dry when trimmed in this way.

I trailer the new rig on one of the latest designs from Dunbier, using their new ‘Easy Glider’ system. It’s a tandem galvanised trailer with multirollers and a self-centering system that makes driving the boat onto the trailer a cinch. Having just towed the boat from Sydney to far north Queensland for its first outing, I can say the trailer and boat towed beautifully.

All in all, Pioneer’s Cape Island is an extremely well-built boat with quality fittings and workmanship obvious throughout. My only qualm is that the rod locker lids need a foam liner underneath to stop the rattling while at sea, and I think they could easily find space for a fourth rod each side. As a design, it’s the best bay boat or hybrid sports fisher I’ve seen on the water, and it’s probably the most versatile and comfortable inshore boat I’ve fished from.

What makes this boat far more attractive again is the fact that you can have a hull landed in the country for around $25,000, which is not only comparable in price to our local aluminium range, but 10-20k below other US bay boats I’ve looked at. Yep, the Cape Island will certainly attract the attention of many inshore and estuary sport fishers.