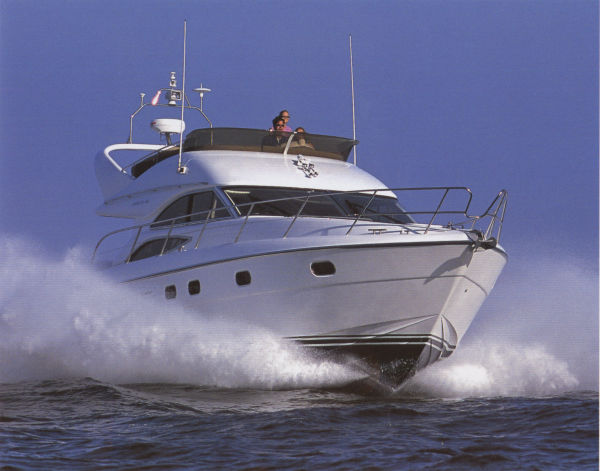 In September last year, I had the pleasure of visiting England as a guest of the British Trade Commission. For eight days 20 foreign boating “journos”, including myself, were taken on a tour of many of Britain’s top boat building yards, both big and small. During these visits the one thing that I found common to nearly all the yards was how clean and tidy British boat builders maintained their factories. But when we visited the Princess Yacht’s boatyard in Plymouth I was astounded at the lengths this company goes to just to keep its factory clean “you could literally eat off the floor” even in the fibreglassing plant.

At most boatyards there are normally a few drops of resin lying around, but not here. A team of dedicated cleaning staff tour the factory continuously cleaning and tidying, but all the staff have the common work ethic of “cleaning as you go”. Sawdust in the woodwork plant, no way. All the machines have vacuums. Even if a worker is hand sawing a piece of wood another person holds a vacuum pipe near the saw blade to remove any dust. At the heart of this company’s success lies a total commitment to quality. Traditional skills meld with computer-aided design and precision manufacturing to create a beautifully crafted product at the highest level of efficiency.

Princess Yachts International has been building boats for more than 35 years. Now, apart from the main waterfront factory at their head office in Plymouth, the company has four other production units in the region totalling around 74,320 sq m. It’s a massive operation building quality sports and flybridge cruisers from 38 to 65 feet. I’d been privileged enough to see these beautiful vessels being built from scratch, firsthand and can categorically confirm their build strength, quality fittings and superb workmanship.

Now, here on a beautiful autumn day I was perched on the flybridge at the helm of a magnificent Princess 45, under clear blue skies on an azure sea, heading due east out through Sydney Heads. The sea was crystal clear with constant 1m swells rolling across the near-glassy surface. There wasn’t the slightest hint of wind as I corrected my course by 10 degrees with the help of the Raymarine Autopilot, to avoid a fishing trawler returning to port after a morning at sea. Head-on into the sea, the 1m swells did little to slow the progress of this 12.5 tonne beauty, which is powered by a pair of Volvo 430hp TAMD74L diesels.

Then, after turning the Autopilot off, I swung the helm and spun the boat 180 degrees to record the effects of a following sea, there wasn’t any. The hull tracked straight to all quarters and delivered a stable and dry ride. Engine noise was minimal. Even at “WOT” it was possible to carry out a normal conversation up on the flybridge, while below in the main saloon with the rear doors closed she was extremely quiet. Speaking of “wide open throttle”, at 2600rpm the Princess 45 hit 32 knots. With a full tank of fuel (1636lt), under normal cruising conditions running at around 18 knots pulling 1850rpm, this boat has a cruising range of around 500 nautical miles.

Back to the test. Electronic controls brought the boat onto the plane smoothly and quite quickly for a boat of this size and weight, with the engines reacting immediately to commands from the gear and throttle levers. Speed to RPM readings recorded during the test were: 9 knots at 1500rpm; 19 knots at 1900rpm; 29 knots at 2450rpm; and 32 knots at 2600rpm. At low speed the hull tracked straight and showed no tendency to wander of line. Under power the bow’s sharp entry sliced through the water cleanly, throwing water and spray down and away from the hull, even though the flare in the bow was not as pronounced as it is on some other vessels. This is achieved by the hull’s large downturned chines on top of two pronounced spray rails on either side of the keel.

The 45 was also fitted with trim tabs, but these were not needed during this test, because of long the planing area of the hull. There was no denying the sea-keeping abilities of this boat, which are perfectly matched by the ambience of her interior and surprisingly practical layout. Stepping through the rear saloon triple opening, stainless steel framed door, that opens half way or totally to increase the boat’s usable entertaining areas, the quality of fit-out and standard of workmanship used in creating this dreamboat is clearly evident – no, it’s stunning.

The visual impact of the highly polished cherry wood veneers, the smell of new leather and the soft broadloom carpets underfoot, all add to the sense of luxury this boat exudes. Directly inside the rear saloon door there’s an entertaining cabinet to port that features a television, DVD, AM/FM CD stereo, drink cabinet and bar fridge. Passengers can sit on the two-seater leather lounge next to the bar, or up to six people can make themselves comfortable around the beautiful saloon table to starboard.

A fully equipped U-shape galley is to port, opposite the magnificent dual seat lower helm station. The dash layout and array of electronics fitted is nothing short of superb, it’s a skipper’s delight. Fully adjustable seats, radar, auto pilot, sounder, chartplotter, compass, VHF radio, comprehensive Volvo engine management system and much, much more. The companionway stairs leading to the accommodations are wide and allow easy passage, but it’s the accommodation of this Princess 45 that also makes this boat different. Not different, better.

The 45 comes standard with a three-cabin layout, but the test boat had only two cabins. Personally, if I were in the market for a cruiser of this size this set-up would be ideal, because when I go cruising it’s with my wife and two children. And having only two cabins allows for a full-sized en suite for the owner’s stateroom, a longer queen-sized bed and a roomier forward cabin overall. The second cabin is also large and has twin single bunks with infill cushions that convert them to a double bed. All cabins, en suite and main bathroom are finished with the same ambience as the main saloon. The Modern Boating team gave her a six-star rating.

Other features include air-con, super quiet genset, intercom system and three grands worth of stainless steel, Bruce-styled Manson anchor, with one metre of stainless steel chain just to maintain the boat’s luxury appearance. There’s even a set of Princess silver cutlery and crockery for six people. Up on the flybridge there’s a massive U-shaped lounge around an oval table were guests can sit and sip a few “Crownies”, while watching the scenery glide by. And to keep them cold there is a large fridge in easy reach sited at the end of the U-shaped lounge. There’s a dual helm seat and a massive sun pad at the rear of the flybridge where sun lovers can work on their tans. The upper helm station features full instrumentation including a second GPS/ Chartplotter.

However, this was mounted on the far left of the dashboard and you have to lean well over to be able to see the screen, but even then it was hard to read. Because of the weather conditions in Europe, most people drive from the lower helm station, but here Aussies spend most of their time on the flybridge. This can create a problem with the radar antenna, because vessels destined for Europe normally have this antenna mounted too low. It isn’t a problem in the Northern Hemisphere, because, as I said earlier, most people there drive from the lower station, but all that radiation hitting the skipper driving from the upper station in the back of the head can’t be good.

Sydney Princess Yachts have overcome this problem by fitting an extra high radar support mount, so the irradiated beam is emitted well above the head of the driver, or anyone else sitting up on the flybridge. Another feature that caught the team’s attention was the chain counter on the anchor winch system. There’s no counting red wire ties, tied around the chain at 10 feet intervals here. In a nutshell, the Princes 45 can be compared to a thoroughbred racehorse. Her class and pedigree are obvious at first glance. The boat’s stylish lines please the eye as does her luxurious fit-out.

With a price tag of A$1.2 million for a 45 footer, she’s not a cheap boat, but she doesn’t aim to be. And remember, you only get what you pay for. On the Princess 45 that’s luxury a plenty, practicality of layout and a level of fitout that’s second to none.