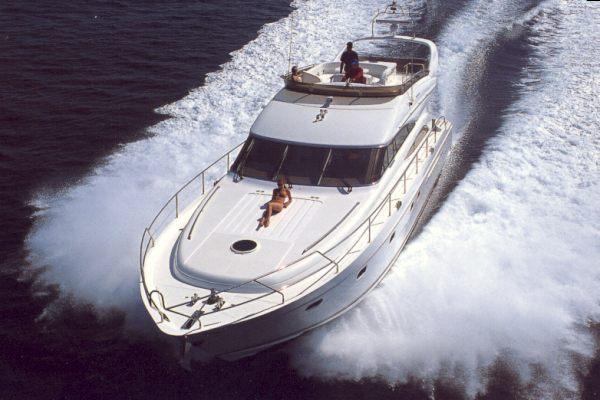 When it comes to buying a new car some people opt for a Commodore, while others wish to go a little more up market and purchase a BMW. Then there are the car fanatics, who can afford to go one better into a top-of-the-line Mercedes or even a Bentley. There is nothing wrong with any of the vehicles I have mentioned, but each fits into its own price bracket and standard of finish and fit-out.

It’s the same when a person looks at buying a 50′ plus luxury cruiser. Most will do the job – albeit some better than others – and they all cost big money, but it is the quality of componentry, standard of fit-out, finish and level of luxury they offer that separates one boat from another. And that’s before we start looking at performance.

So while some of the mass-produced American boats may be compared to a top-of-the-line Commodore, a boat like the Princess 61 Flybridge is the on-water equivalent of a Bentley – pure luxury.

The standard of fit-out, finish and performance of Princess motoryachts ranks them as one of the best luxury boats in the world. And the Princess 61 is no exception. The boat is constructed to the highest standards to successfully handle the tough conditions the ocean can sometimes dish out.

Princess hulls are designed not only outperform in terms of maximum speed with safety and comfort, but do it economically, over long distances and at high speed if you can afford the fuel. Then again, if you can afford the A$2.55 million price tag of a Princes 61 Flybridge, a couple of grand for fuel isn’t going to bother you much.

But it’s not only safety and performance that put Princess motoryachts at the head of the field. Their interiors are ergonomically successful and a delight to the eye, while the exterior lines have a timeless style and look that doesn’t date. The latest CAD software, combined with precise CAM processes, produce hulls that are as perfect on the water as they were on the drawing board.

But the hulls were not only perfected on the drawing board. The design team at Princess spent thousands of hours testing the hull in some of the toughest waters of the world; the English Channel off Plymouth. The result is the world-class Princess 61.

The two-hour trip from my home in South West Sydney across to the Northern Beaches and the marina at the Royal Prince Alfred Yacht Club was for once quite pleasant. No traffic snarls, abusive Sydney drivers, or peak-hour accidents to contend with. Just a temp of 25 degrees, bright sunshine, no wind and flat seas. It’s a dirty job but somebody’s got to do it.

Mark Chapman from Chapman Marine/Princess Yachts is waiting for us down on the marina. It’s not hard to spot the boat we have come to test. The Princess 61 has a presence about her; the boat just seems to stand out from the crowd.

We waste little time slipping the lines and within minutes, with the help of the bow thruster, we’re clear of the berth and cruising down Pittwater. Once clear of the no wash zone, Mark eases the electronic throttles forward and 26 tonnes (plus 3000 litres of fuel) glides easily onto the plane, before steaming down Pittwater at a comfortable 21 knots.

The most noticeable thing about the ride in a Princess 61 Flybridge is the engine noise; there isn’t any. Up on the flybridge with the wind in our hair, we can hardly hear the twin 700hp Volvo diesels purring away below decks. Down the main saloon it’s even quieter. Princess has gone to great lengths soundproofing the engine room and ensuring the exhausts are well baffled.

Once behind the helm I push the throttle fully forward and the boat responds instantly. The readout on the GPS is 31 knots. Not bad for a boat of this size. Being a shaftdrive boat with the propellers in mini tunnels and having generous rudders ensures the Princess 61 responds instantly to the helm. Like all big boats her turning circle is not exactly in the ski boat field, but she comes about quickly.

Out on Broken Bay the north-easter’s kicked in and now there’s quite a swell running. But try as I may, even punching straight into the sea I can’t get a drop of water over the bow. Again it’s an indication of just how well these boats are made. The ride is soft, the sharp entry makes short work of the swells and the boat’s as stable as a rock.

I mentioned earlier that the Princes 61 carries 3000 litres of fuel. By my calculations at 21 knots she’d have a cruising range of 450 nautical miles. But when you consider that offshore you’d normally only be pulling around 12 to 14 knots, that distance would be considerably greater.

As far as layout goes, with her owner’s stateroom amidships, two further guest staterooms and an aft crews’ cabin, long stays onboard would be a stately affair. With the exception of the crews’ cabin, all three cabins are spacious and their bathrooms incorporate separate shower stalls and vanity units. Massive island beds, hanging lockers, cherrywood joinery, the staterooms are luxurious to say the least.

Moving up onto the main level, a magnificent saloon and separate dining area is complimented by a large and well-equipped galley, with twin fridge freezers, dishwasher and icemaker. A utility area and laundry completes this outstanding interior. The additional aft cabin is basically for the crew. But as this cabin is also air-conditioned the kids normally make this area theirs.

Furniture is finished in natural cherry wood complimented by the use of inlaid marquetry and quartered grain, a signature of all Princess motoryachts. Brilliant sound system, television cabinet, beautiful soft leather upholstered lounges and a lower helm station of world-class proportions.

But it’s driving from this lower helm station that we notice a distinctly different characteristic to most vessels in this class. Even when accelerating out of the hole and when she’s on the plane you can still see clearly over the bow. This boat maintains a level attitude at all speeds. The aft cockpit is expansive with the rear window of the saloon opening from the top so guests in the aft cockpit can converse freely with those in the saloon. A hatch in the cockpit floor opens to reveal the massive engine room, but! While there’s plenty of room around each engine to carry out regular maintenance and servicing, it has to be done on your hands and knees and it’s a bit hard on the back.

Moving into the main saloon and up the stylish stairway, the wide-open flybridge is a delight. Dual helm seating, an unusual L-shaped passenger’s lounge and a massive sunpad make this another useful entertaining area. We Aussies tend to do most of our driving from the flybridge and the set-up here is ideal. Even when underway the skipper isn’t left out of the conversation.

The flybridge instrumentation is also impressive and includes, radar, a chartplotter/GPS, sounder, autopilot and a swag of gauges, switches and dials. But surprisingly you don’t need a pilot’s licence to drive this baby. They are all neatly laid out, easy to read, but more importantly their inclusion makes sense.

Speaking of radar, Chapman Marine has also made some sensible changes to the radar mount up on the Targa arch. It’s been raised. Why ? Well, in Europe most people drive their boats from the lower station, so when the radar is on there isn’t a problem. But as I stated earlier, here we normally drive from the flybridge. If the radar antenna wasn’t raised above the skipper’s head the microwaves it emits could be a problem.

There’s plenty of usable space out on the non-slip foredeck, a large sunpad for those wishing to soak up a few rays and a foot control for the anchor winch. This allows the crew to weigh anchor and position it back into the bowsprit without damaging the gelcoat.

The list of standard equipment for the Princess 61 is extensive. Besides accessories such as: microwave oven; DVD; washer/drier; electric sternline docking winches; hot and cold transom shower; shore power and all the other luxuries usually associated with a vessel of this quality; there’s a 350kg davit; an 11kW generator; a helmsman’s door to the side deck and a flybridge wet bar and electric BBQ. The list goes on and on.

There are few that could dispute that Princess has a reputation for building vessels of superb quality and luxury, coupled with the sportsboat-like handling and performance normally associated with smaller boats.

Her styling is both classic and modern, but it is also timeless. She’s as luxurious as the five star hotels of Europe, but still tough and powerful. And her handling and sea keeping ability are flawless. But not only is the Princess 61 a show piece, she’s made to be lived on and used.

At A$2.55 million the Princess 61 is not cheap, but if you’re in the market for a Bentley, not a Commodore, it’s not much if you say it quickly.

If you are looking at buying a luxury motoryacht have a look at a Princess before you sign any contracts. You’ll be glad you took the time.

Engine Room
The Princess 61 Flybridge test boat was fitted with twin Volvo Penta D12/700, 700hp, diesel shaftdrives. Optional power is twin MAN D2848 LE403, 800hp diesels, but after testing this boat and experiencing its performance with a full tank of juice onboard, the team agrees the twin 700s have more than enough grunt. We doubt whether the extra capital outlay for the bigger engines is warranted, considering you only gain a mere 2 knots in top-end speed and burn extra fuel. The engine room is fully soundproofed and equipped with a fire extinguishing system, but it’s kneeling room only.