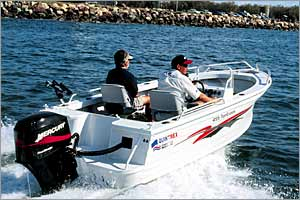 When it comes to 4m Quintrex fishing boats I must admit to a degree of bias. Why ? Because I’ve owned and fished from one for more than 20 years. I’ve caught everything from bass to billfish.

All the way from the freshwater out to where green inshore water meets the offshore blue. And it has also served me well on camping trips and family outings. So if my view of the latest Quintrex 455 Top Ender is somewhat one sided, I can’t help it, I know these boat too well.

I have only good memories of my old Quinnie. They were great times, but the reality is that in the 25 years since my long suffering Fish Raider was first designed and built, tinnie design has changed dramatically.

The 455 Top Ender’s hull looks the same as my old Fish Raider. But apart from the characteristic Quintrex flared bow, these two hulls demonstrate just how much Quintrex tinnies have changed over the years.

The Maxi Transom extends the bottom sheet 20cm past where the transom sat on the 435 hull. This affects many things. And after my 20 years in one of the boat’s ancestors, for me some of them are profound.

With the motor mounted outside the cockpit on a pod there’s no intrusive engine well encroaching on the fishing room inside the boat. It can get a bit squeezy with both of the pedestal seats mounted in their aft sockets, which is their travelling position.

But these seats can be quickly moved to other sockets if they get in the way while fishing at rest or when trolling. Apart from having to negotiate around the side console – which is small enough anyway – the layout is superior to a centre console in the same size hull.

Compared to my old Fish Raider there’s much more fishing room inside this Top Ender. Not only because of the aft end arrangements, but because at the bow the Fish Raider’s overlong foredeck has been replaced by a much shorter one containing an anchor well.

Behind this there’s a large, raised casting platform, which drops to a flat deck aft that stretches all the way to the transom. The 455 Top Ender has a false transom, because the outboard motor is mounted on the Maxi Transom pod.

Built into the interior of the transom is a strong shelf, which easily holds the batteries, associated switch gear and the oil bottles should you specify an oil-injected two-stroke outboard on your new boat.

This shelf is suspended above deck height and is effectively contained inside the transom. This also allows your toes to fit underneath the shelf without compromising leg support.

Another of a Maxi Transom’s advantages is that the extra buoyancy it provides effortlessly supports the added weight of today’s increasingly popular and fish friendly four-stroke outboards.

The test 455 Top Ender was powered by a 60hp Mercury four-banger, which showed precisely why four-strokes are becoming such a popular choice with fishos.

Running the Top Ender around the Southport Broadwater and eventually across the Seaway and out to sea, we soon discovered another positive contribution from the Maxi Transom.

That 20cm extension of the bottom sheet acts like a big trim tab to lift the 455 Top Ender out of the water with only a barely noticeable transition from displacement to planing speed.

There is a medium-sized chop on the water at the beginning of a runout tide making the swells rolling between the seawalls steepen. The Top Ender is an absolute delight to drive in these conditions.

So good in fact that the Modern Boating test team runs her through the entrance a couple more times just for fun. For a boat of its size the 455 Top Ender’s ride and handling in choppy water are remarkable. And I have to say, much, much better than my old 25 year boat.

Driven sanely, with two people seated in pedestal seats mounted in the aft sockets, we remain dry and I am constantly amazed by how softly the variable deadrise Millennium hull deals with the inevitable bumps and bangs from the confusion of the surface chop.

The Millennium Hull is also responsible for the third remarkable step forward 25 years have brought. The test 455 Top Ender is also fitted with a plumbed live well under the aft end of the casting platform.

This arrangement has become popular because some clubs now run live weigh-in fishing competitions. But we’d be as happy to use it as a drained fish pit to keep the interior free of slime and scales. Maybe the live bait well could be insulated as an ice box ?

That’s one for the Quintrex research and development boys when we get this boat back to the factory. There’s also another storage compartment between the live bait well and the bow to stow the lifejackets.

The other thing we haven’t mentioned yet is that our test boat is fitted with a second underfloor fuel tank that contains an additional 45lt. In combination with the standard 65lt tank, the total of 110lt will be popular in the north where long runs on big rivers and along the coast are the norm.

On the negative side, the team has commented previously that we’d prefer to do without the side pockets, even if apparently Quintrex’s dealers disagree. And the grab bar over the otherwise neat little side console looks angular and awkward. We’re sure a boat builder as innovative and free thinking as Quintrex could improve on this.

Overall, the Modern Boating team loves the 455 Top Ender, especially Steptoe who conducted the initial test and shot the pics. This Quintrex Top Ender 455 hull’s surefootedness inspires confidence, its ride is quietly comfortable and the performance with the 60hp Mercury four-stroke outboard, covered in engine room, is understated.

Fitted with a two-stroke engine, around $23,450 will get you on the water in a new Quintrex Top Ender 455. Forget any preconceived notions about what other 4m aluminium fishing boats have been in the past, this is a class act all its own.

With our other sentiments about the 455 Top Ender entirely aside, the power and hull match was excellent. The 60hp Mercury four-stroke had the Top Ender planing at 10 knots, and cruising around at an economical 4000rpm.

Plus or minus a couple of hundred revs, had us cruising in the region of 15 to 20 knots. With all the taps open on calm water inside the Seaway, the 60 ran out to a whisker under 30 knots.

On paper those figures are perhaps no more than you’d expect. But on the water the 60hp Merc’s seamless power delivery and unobtrusive demeanor really did compliment the hull’s exceptional performance.