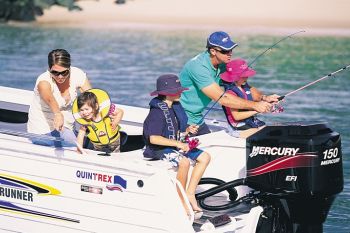 Keep On Running, Quintrex’s Instant Boat packages will get you on the water fast.

At 5.83m, this new version of the well-established Quintrex 580 Coast Runner is by no means a small boat. It has plenty of power and good looks and is available in a Quintrex ‘Instant Boating’ package.

An 115hp Mariner two-stroke outboard provides the power, but even though she’s sitting on a dual-axle trailer, the 580 can’t be towed by small cars. And that’s the only downside of this new Quintrex which doubles as a great family cruiser or bluewater fishing specialist.

Boats of this size are handy in southern Queensland where there are expansive sandy bays such as Moreton and Hervey, which offer good fishing and boast some of the best-sheltered beaches in the world.

The Modern Boating team tested this boat on southern Moreton Bay. But as it turned out it wasn’t much of a test at all. The big Quintrex performed effortlessly over the wind chop blown up by a brisk sea breeze and we had to run out to the Jumpinpin Bar to find enough decent rough water to test her on.

The 115hp Mariner two-stroke on this boat performed so well it’s hard to imagine anyone needing more power. Power-to-weight performance is a traditional two-stroke’s forte and this one had the big Quinnie up and running in seconds. A Mercury Marine 18in Vengeance prop produced a top speed of 33 knots with an in-gear idle trolling speed of 1.6 knots.

Minimum planing speed was a lowly 6.8 knots at 2000rpm. At 3000rpm, the 580 Coast Runner powered along at 15.8 knots and at 4000rpm, it hit 22.8 knots. Cruising in the mid 3000rpm bracket maintains around 20 knots, which shows the outboard isn’t working hard at all. This should make for fuel efficient and comfortable cruising.

And while our biggest builder of metal boats continues to press the traditional perceptions of how fibreglass and tin boats compare, new side panels, filled with positive buoyancy material are setting new standards in how quiet an aluminium boat can be on the water.

Foam-filled sides and underfloor areas, carpeted deck and an enclosed foredeck feature on this Coast Runner model. They work together to insulate the boat’s interior from typical ‘water slapping against the hull noises’ generated by most tinnies.

You’d expect a 5.8m runabout to be roomy, but this boat’s cockpit is huge. Couple this with her high sides and she makes an effective, open water fishing platform. This, plus the knowledge the Maxi II’s extended transom has a full height bulkhead across the boat’s aft end, create a safe and secure place for fishing and family activities alike.

Quintrex’s latest models, with the enclosed side panels, have an extruded rail along each side where the side panel meets the deck. This fixes the deck and side paneling in place. It also allows your toes to slide underneath the side panel far enough so it supports your legs much better when playing big fish than earlier Quintrex models.

Incorporated into these latest mouldings are cockpit lights, storage pockets, drink holders and rod racks. But I was less than impressed with the rod racks on this boat. We had a couple of light spin rods along as props on the day and when they were placed in the racks their reels stuck out right at shin level.

This, plus the fact you need to use much force to remove rods from the foam slots holding the rod tips, make snapping a tip a distinct possibility.

In a family role, the bench seat across the transom works well. It folds down out of the way quickly and can be easily removed if its services aren’t required.

At the bow end of the cockpit are the usual pair of runabout bucket seats. The seat back supports now swing over, so the navigator can sit facing backward while trolling, or when towing wake toys. The helm seat is mounted on an adjustable slide. This allows the helm seat to be moved aft far enough to stand comfortably at the wheel in rough water.

The bimini top, which is part of Quintrex’s “Instant Boating” package, is configured to allow enough space between the bimini and the windscreen frame for the driver to stand without compromising the shelter from the sun.

The windscreen provided excellent shelter from slipstream buffeting. While some spray might find its way between the screen and bimini when its rough going, on a sweltering southern Queensland summer day we appreciated the cooling airflow.

Extensive use has been made of rotomouldings in the dash and instrument panel area. There’s a spacious glove box and the helm features the usual engine instruments, plus a 27Mhz radio behind a spray-resistant panel. The windscreen frame has a stout grab bar for security when things get rough. The centre of the screen opens to a hatch in the foredeck, allowing you to move forward to the anchor well. This also had a rotomoulding liner, so the anchor doesn’t rattle in-transit.

Beneath the screen and under the foredeck is for storage. It’s a bit pokey getting gear into this area, but it’s great for items you don’t need in a hurry.

The Quintrex 580 Coast Runner is a big, high-sided aluminium boat offering good protection in rough conditions for both off shore fishing and family cruising. It’s a no-nonsense boat that, fitted with the 115hp Marina two-stroke, is well set-up in the power-to weight ratio stakes.

SAFETY FIRST
Quintrex is one of the few Australian boat manufacturers to feature ‘Level Flotation’ on virtually all of its models as standard.

Should the boat become fully swamped, Level Flotation helps it remain level and in an upright position under controlled conditions. Significant quantities of foam flotation are strategically installed within the sides and the underfloor compartments of its boats.

Quintrex perform comprehensive swamp tests at the factory. These rigorous procedures are conducted in accordance with the American Boat and Yacht Council and European Certification (CE) standards. Quintrex swamp tests are performed with allowances for the heaviest-rated motor, occupants and gear.