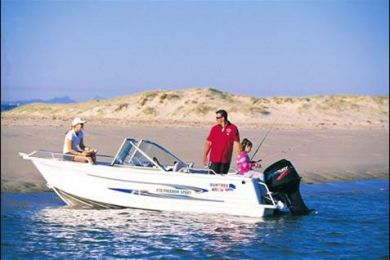 The release of the latest Quintrex 475 Freedom Sport has much of the boating public cheering, because now there’s a family bowrider that converts into a full-on sportfishing machine in seconds.

But bearing in mind the effect the earlier release of the 5m Quintrex Freedom Sport had on sales of the 475 Bay Hunter Caprice runabout, Quintrex are now pondering what further impact the new 475 Freedom Sport will have on this popular model.

The new 475 Freedom Sport can deliver everything the Bay Hunter ever does, but its convertible bowrider configuration makes it capable of doing much more. Some may argue that the Bay Hunter’s foredeck offers better shelter. And they have a point. But if the Freedom Sport’s windscreen centre section and the door below are closed, protection from the elements can be dramatically improved.

On the other hand, gear stored beneath the Freedom Sport’s bow seating is far more accessible than if it was poked away under the runabout’s foredeck. You simply step into the bow cockpit, lift a seat cushion and there it is. There’s no more scraped hands and knees from diving under the dashboard.

But access isn’t the only feature that is endearing this boat to fishos and boaters alike. Fishing styles are changing, with lure and fly casting gradually replacing bait fishing techniques in the popularity stakes. And the Freedom Sport’s convertibility addresses these changes perfectly.

Gone are the days when a boat was dad’s toy. A thing he and his mates used on weekends after leaving mum and the kids at home. Thankfully that’s a thing of the past. So a boat that’s as useful for family outings as it is for serious fishing is destined to be a top seller.

But there’s also another new Quintrex model that’s gaining a large following; the 600 Freedom Sport bowrider. Out on the water this 6m aluminium family bowrider come bluewater sportfisher powered by a 150hp HPDI Yamaha outboard, proved to be one of the best fun boats the Modern Boating team has ever driven. It lost nothing in the performance stakes even when compared to an equivalent fibreglass bowrider.

As events transpired, a few days after this test we were out in what could only be described as a top-flight fibreglass 6m bowrider. For reasons of decorum, this boat will remain nameless, but it was powered by a 200hp HPDI Yamaha and this boat was also a hoot to drive.

But after taking the different test locations and various differences between the bowriders, such as propeller pitch into account, the aluminium hull handled better. These latest Quintrex designs still utilise the stretch forming techniques originated more than 50 years ago by the company’s founder Terry Quantrill – the characteristic Quintrex flared bow – but below the chines things have changed. The bottom sheets are now concaved to form what Quintrex call the Millennium hull, which creates a ride-softening variable deadrise.

It’s been said by many commentators that these new Quintrex’s Millennium hulls considerably narrow the gap that traditionally exists between fibreglass and aluminium boats. Quintrex has been whittling away at this gap since they first released a flared-bow barra punt called the Hornet back in about 1997.

To tell the truth, it was during the Modern Boating test of the 600 Freedom Sport, that the team realised the gap between fibreglass and aluminium hulls has finally been bridged. But this statement throws us head first into that time honoured row over an individual’s preference for either a metal or GRP hull. Both camps have valid arguments behind their reasoning, but this argument is sacred ground that will not be trodden here.

Having offered our opinion on handling, let’s go back to other comparisons for a moment. The one area where the 600 Freedom Sport did lose out to that unnamed fibreglass equivalent is overall finish. It just wasn’t in the same class.

Not that the Freedom Sport was roughly finished – not for an aluminium boat that is. But during welding, metal distortion is inevitable. It can be minimised and bogged to obscurity, as some of the well-finished custom metal hulls are these days.

During mass production, visible welds and their resultant distortion remains the final challenge for the likes of Quintrex to defeat in their quest to equal their glass opposition in every respect. Whether that’s possible, or indeed necessary in practical terms, is another question entirely.

The 600 Freedom Sport has the same hull as the Quintrex 600 Bluewater (centre console) and 600 Offshore (cuddy cabin) models. Some readers may ask why there’s a need for an offshore bowrider version ?

Well, around Brisbane if a boat has the capability to safely and comfortably cross open waters – such as those found between northern Moreton Bay to the playgrounds along the west coast of Moreton Island – for family cruising and fishing, it would definitely get a foot in the door of the mega sales department.

Then, if the same vessel also can be quickly turned into an excellent lure and fly casting platform it should end up with both feet firmly planted in that same department. It’s the 475 Freedom Sports ability to do the same for the freshwater scene that should also see her sales figures skyrocket.

We purposely haven’t given any detailed description of either boat’s interior in this test report, simply because neither departs from the earlier Freedom Sport 5m, 5.3m or 5.6m models previously tested. They all have bow seating that converts to a casting platform and an easily removable stern lounge. When this lounge is taken out of the boat it leaves the same wide-open cockpit you find in any Quintrex runabout, cuddy cabin, or centre console.

But we all agreed the backrest cushion, not shown in the 475 test boat, should be an option taken up by any prospective buyer. It wouldn’t interfere with the boat’s fishing abilities and the rear lounge isn’t very comfortable without it.

Another notable feature missing from both boats was a rod rack or rod storage locker. These Freedom Sport models are extremely popular with serious fly and lure fishermen. And while Quintrex recognise this by including such options such as bow mounts for electric motors, a rod locker, or at least a rod rack, should be available.

The 6m Freedom Sport’s layout does depart slightly from other models with the inclusion of a luxurious aft L-shaped lounge set to starboard. This allows easy access through a transom walk-through set in the port side. Combined with a folding boarding ladder they make boarding from the water after skiing or snorkelling easy.

Apart from driving these two boats during the Modern Boating test, I recently had the opportunity to run a 475 Freedom Sport out through the heads off Sydney’s famous Pittwater.

Having owned one of Quintrex’s original flared-bow 4.5m hulls for more than 20 years, this latest run clearly demonstrated to me just how far Quintrex have progressed with the Millennium hull. Through a confused chop in front of the cliffs under the old Barrenjoey lighthouse, the Quintrex 475 Freedom Sport motored along comfortably in conditions that would have been down right torturous in my faithful old tinnie.

The differences between my 1978 vintage 4.5m hull – the first of the then radical high-sided Quinnies – and this 4.75m boat don’t just boil down to the ride-cushioning effects of the variable deadrise bottom. This Quinnie also boasts what the company calls a Maxi Transom, which is a full-width engine pod that creates a 25cm difference in hull length.

The pod ensures that the hull maintains a level attitude without the pre-plane squat that plagued many earlier hulls. This helps keep the fine end of the hull’s entry in contact with the water where it can do its job more efficiently.

Quintrex have always been innovators when it comes to improving aluminium boat building techniques. This quality definitely shines through in these two new models. The soft ride and stable handling, delivered by the Millennium Hull and Maxi Transom, combined with the Freedom Sport’s convertible layout, ensure the model’s ongoing success.

We actually managed to put two 475 Freedom Sports through their paces during this test. One was powered by a 70hp two-stroke Yamaha. The other by Yamaha’s newly released 60hp four-stroke.

Surprisingly, while the 70hp two-stroke had that ‘right’ feel about it hung on back of the 475 Freedom Sport, so did the 60hp four-stroke. The smaller 60 lacked little of the oomph by comparison with the more powerful 70.

Four-strokes are expected to be quiet. It’s one of the advantages pushed hard by the marketing department. But the new 60 Yammie takes quiet to an entirely new level. Even at a maximum 5700rpm it was remarkable. At idle it was so quiet I actually gave the starter motor gears a work out, when I went to start an already running engine.