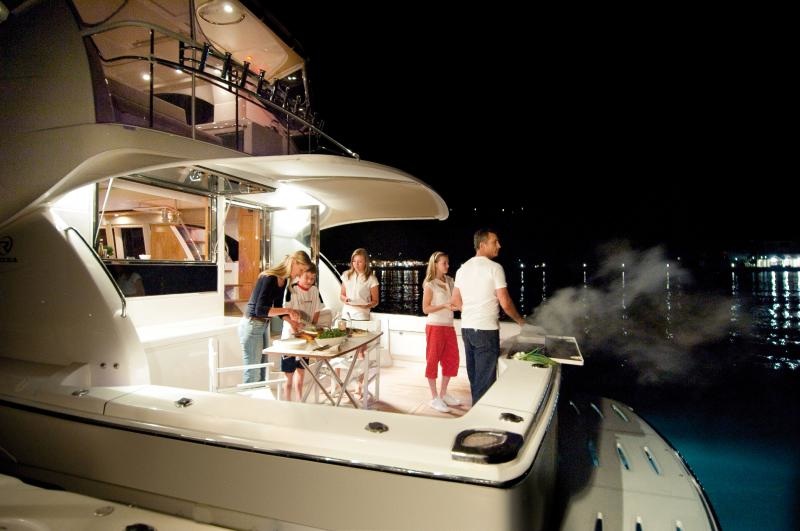 “We got to see a part of Australia we had never seen before,” enthused Ron Loney. He and June had joined a group of 80 luxury boat owners and their guests aboard 20 Riviera cruisers that steamed south from the Gold Coast to enjoy the spectacle of the Jacaranda Festival in Grafton.

The occasion, the Jacaranda Experience, was an annual event for Gold Coast Riviera Dealer R Marine Coomera, providing a chance for owners of a wide cross-section of Riviera size and model configurations to gain first-hand experience of cruising in genuine offshore conditions. The flotilla left Southport on Thursday morning and cruised the 100 nautical miles to stop overnight in Yamba at the mouth of the Clarence River.

Ron and June Loney joined a Riviera “Experience” event for the first time, and for them the whole weekend was unconditionally priceless.

“I have owned cruisers for over 30 years now, but we have never undertaken an offshore trip in company such as this,” said Ron on board Investigator III, a Riviera 51 Enclosed Flybridge.

“Meeting the legendary Kay Cottee – the first woman to sail solo, non-stop around the world – on the first night in Yamba was also something special for us, sharing some of her experiences. All in all, we were doing with our boat what it was specifically designed for, having fun and meeting people. It was the perfect opportunity to get to know other Riviera owners through the many fun social occasions organised for us. We will certainly be doing these Riviera group trips again!”

Hosted by R-Marine Coomera Dealer Principal Keith Hansen, the trip began with the all-important briefing at the Gold Coast’s Southport Yacht Club on Wednesday evening. At 0800 hours on Thursday, November 1, the boats cleared the Southport Seaway entrance bound for Yamba in ideal windless conditions. The 100 nautical mile journey was expected to take between five and six hours in very slight seas. It was virtually a situation of, “turn right after the Seaway, and right again at the relatively user-friendly Yamba Bar.”

A bonus for the 20 adventurers was the chance to meet and talk with veteran Riviera owner Ian Reynolds. He joined the flotilla aboard his Riviera 56 Enclosed Flybridge, Investigator IV as the first leg of a circumnavigation of Australia. A great inspiration for the guests and skippers in the flotilla at the grand old age of 79 years, Reynolds plans to take 12 months to complete the 9,000 nautical mile trip.

As the flotilla headed out to sea from Southport on the Gold Coast, a helicopter appeared overhead with a giant Riviera flag billowing below, waving a fond farewell to Reynolds and Investigator IV.

“People think I am mad undertaking an adventure such as this at my age,” Reynolds told the group. “But my theory is that, if you want to do something badly enough, you should find some way – any way – of achieving that dream. Never die wondering. It has long been a passion of mine to do this trip, and see this magnificent country from the water – and now I have the boat to do it in.”

After an overnight stop at Yamba Marina, the flotilla headed along the Clarence River to the picturesque inland township of Grafton, resplendent during the annual Jacaranda Festival for which the town has become famous.

The leisurely five-hour trip inland to Grafton was the highlight of the trip for Raby Bay couple Ross and Tanya Sadler. They were happy to be using their Riviera 51 Aquavit II on an offshore cruise. Visiting a location such as the Clarence River was something they would never have thought to do.

“While it was hard to identify any one specific point as the highlight – there were so many – being able to share the beauty of this area, this experience, with our two families was indeed something very special,” they said.

“We didn’t know any of the other people before the trip, but with all the radio talk on the trip south we soon became one of the team. The comradeship among like-minded people was very special and increased with each day of the trip.

“The organisation by the R Marine Coomera team for every single aspect of the trip was very professional. We were very much made to feel a part of the occasion and for us that was the icing on the cake.”

The first night based at the Yamba Marina was a meet-and-greet opportunity over dinner at the local Yamba Marina Café.

For Ron Loney, there was a technical benefit to the trip as well as an enjoyable social experience.

“Having just taken delivery of a new Riviera 51 Flybridge, it gave us the opportunity to get to know the workings of our boat – fuel efficiency, cruising speeds, the planning that goes into a trip such as this. It also gave us the chance of getting to better know the Riviera and R Marine management teams. That provided great security for us, being able to ask advice along the way on what we should and shouldn’t be doing with our new boat!”

While the Jacaranda Experience offered something of a learning curve for couples such as the Sadlers and the Loneys, the trip was a great opportunity for others to renew friendships forged on previous Riviera Experiences.

For flotilla stalwarts Craig and Kerrie Nissen from Calypso Bay on the Gold Coast, the occasion assumed great importance.

“We have been going on these events for three years now,” said Craig who owns a Riviera 47, Family Affair. “There is something special about being involved with a group of people who all have the same passion for boating.

“For my family, including my mum and dad, these trips certainly have become almost addictive. You have new experiences and meet new people on each trip. The highlight for us was certainly the Clarence River. I like the beach and the ocean, but seeing something like this has added a whole new dimension to our boating. We always head north in our Riviera 47 Flybridge so we would never have dreamed of heading to a location such as this. Riviera is doing a great job to encourage people to use their boats, and to visit different destinations. They took all the hassle out of the trip and everyone was so enthusiastic.”

Proceedings began in earnest for the flotilla with a very full Saturday, soaking up the delights of Grafton’s big day of the year, the Jacaranda Festival. A bus was on hand for local tours as well as visits to the Festival of Flowers, local markets, handicraft stalls, gem club displays, art galleries and vintage car displays, before lunch at the local Grafton Golf Club.

After lunch the flotilla had the options of visiting the local greyhound meeting, Clarence River Historical Society, the cycle criterion, a pipe band performance, the local Clarence River Sailing Club regatta, or the Coldstream Gallery in nearby Ulmarra. Activities climaxed late afternoon, with the Grand Float Procession down the main street of Grafton.

The R Marine team, led by Keith Hanson, his enthusiastic son Ryan and ‘Mr. Fixit’ Alex Hayward, the chief mechanical engineer on hand to offer help and advice should anyone strike problems during the trip, made sure the entire occasion ran like clockwork and ensured no-one got lost!

They also assumed the role of unofficial minders for the nine children aged between12 and 15 years who were a very integral part of the trip.

“The accent of the R Marine Experiences is totally centred around the family enjoyment ideal,” explained Riviera’s Stephen Milne who joined the flotilla to represent the company. “That is why we cater for the children too; making sure they were included in all the social occasions along the way. For Riviera, it is also just another way of demonstrating to our owners how we are behind them every step of the way with their boats.”

The next trip for the R Marine Coomera team is planned for early 2008, with Fraser Island and the Great Sandy Straits being the preferred destination.