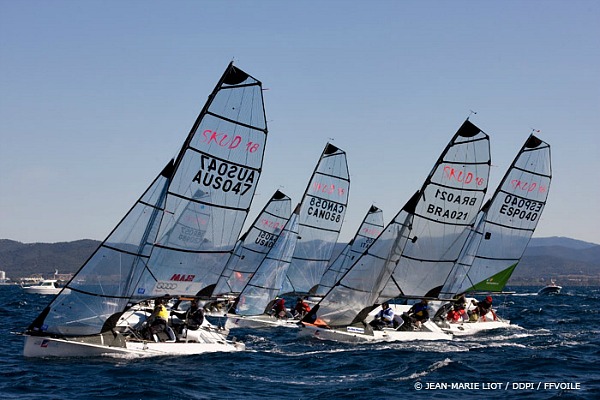 Australian sailors have picked up where they left off at the ISAF Sailing World Cup in Hyeres, France, with a number of crews recording wins on day two of racing.

Skud 18 sailors Daniel Fitzgibbon and Liesl Tesch had a win and two seconds to end the day with a share of the lead while Krystal Weir is second in the Laser Radials following a win and a second.

Belcher and Page bounced back from the disappointment of a broken rig on day one in style, winning both of their 470 men’s races to move their way back up the leader board.

“Our performance today was probably similar to yesterday but without the psychological side of damaging the rig in quite extreme conditions,” said Belcher. “Today there wasn’t as much wind but the breeze was still up there and it was quite cold, perfect preparation for Weymouth and to come away with two wins is nice.

“It’s nice to know that after damaging our gear, that our second or third gear is right up there,” he said. “Today we had a good 20 to 25 knots again so we wanted to keep it simple and get around the course and make sure that we didn’t have any gear failure, but also focus on ourselves. Our performance was really good and our speed was really good, we lose these conditions and to achieve these results is perfect.”

It’s a trans-Tasman affair at the top of the Laser class with Australian and New Zealand sailors filling the top four spots.

Kiwi sailor Andy Maloney is first overall, just one point ahead of Australia’s four-time Laser World Champion Tom Slingsby who had two third place finished on Monday, with Tom Burton just a point further back in third. New Zealander Andrew Murdoch tied on points with Burton and is fourth.

Burton’s two wins continue a good start to the European season after Bronze two weeks ago in Palma, with the Sydney-based sailor leading an Australian first, second, third and fourth across the line in race two.

“It was a pretty good day today with two bullets in the end,” said Burton. “It was pretty tricky, very shifty and still breezy though not as much as yesterday.  So it was more about tactics and strategy rather than just hiking.

“Today pretty well all the Aussies were in the one fleet and we all train together.  We know each others strengths so it was pretty close amongst all of us all day,” he said.

In the Skud 18 class Daniel Fitzgibbon and Liesl Tesch have finished day two with a share of the lead, alongside the British crew of Alexandra Rickham and Nikki Birrell.

Fitzgibbon and Tesch began their day with a win and a second, with the Skud fleet returning to shore for a few hours, with the Australians picking up a second when they returned to the water for one race late in the day.

Krystal Weir is just one point off the lead in the Laser Radial class after an identical scorecard to day one, finishing with a first and a second.  Weir led for most of the second race before loosing the lead to Finnish competitor Tuula Tenkanen on the last downwind leg.

After spending all of Sunday on shore 49er crew Nathan Outteridge and Iain Jensen were pleased to get back into racing, finishing the day third overall, four points behind the leaders after two seconds, a sixth and a fifth.

“It was great to finally do some race as we didn’t have the best preparation with only one hour of training before the event started,” said Outteridge. “We had a good day and are sitting in the front few so we’re pretty happy with that.

“Our results today were definitely all keepers,” he said. “It’s a bit unusual for us to have such a good first day but we managed to get two seconds in the stronger breeze this morning and then this afternoon when it got tricky we were caught out a few times and clawed our way back to get a fifth and a sixth. In that last one we were 12th at the last top mark and just pulled through to get a fifth so we’re really happy with that.”

Brendan Casey remains in fourth in the Finn class with a ninth and a third in Monday’s two races.

Australia’s Women’s Match Racing crew of Olivia Price, Nina Curtis and Lucinda Whitty had a long day on the water with nine races to begin their regatta.

The Australian trio sit on five wins and four losses from the nine races, recording wins against the Finnish and Danish crews, both Spanish teams and one of the French crews.

In the 470 fleet Sam Kivell and Will Ryan are five places behind Belcher and Page in 15th overall, following a 10th and a fourth. Matthew and Robert Crawford are 39th, ahead of Alexander and Patrick Conway in 54th, Matt and Ben Taylor in 69th and Scott Cotton and Robert Size in 73rd.

Luke Baillie is the leading Australian in the RS:X men’s class in 20th following a 17th and an eighth, with Patrick Vos 39th and Jimmy Levy 49th.

Racing continues in Hyeres on Tuesday with the regatta continuing until Friday 27 April.

Day two video highlights can be viewed at http://www.youtube.com/watch?v=zDEkUCZyr6o.

Full results can be found at http://sof.ffvoile.com/.

For more information on the Australian Sailing Team visit www.australiansailingteam.com.au and follow the team on Twitter at www.twitter.com/AusSailingTeam.