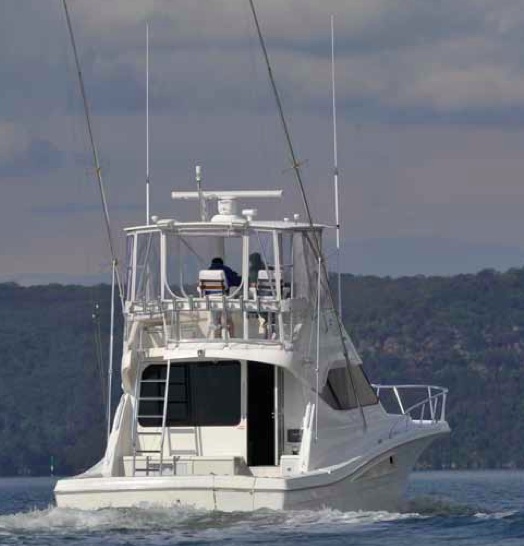 Ambling down the dock towards the boat, I immediately noticed the giant outriggers strapped to the sides. They were huge. And not being a fisherman, I told myself that this was a boat built for sportsfishermen. Yet when I stepped aboard, it felt more like a cruiser.

The roomy cockpit gave an impression of beaminess (16ft – or 4.9m – according to the manufacturer’s tech specs). The feeling of roominess continued into the carpeted saloon, with its high ceiling (2m!), its large and deep sofas, and its cherry joinery. These fishermen know how to live, I thought.

But I was here to write about the boat, and the first step to writing is learning. Looking at the tech specs, I was surprised by the small deadrise (12 degrees). I would’ve expected a deeper V for a boat designed for offshore fishing grounds. How were they planning to keep a gang of anglers from lurching over the rails on a rocky ride?

The answer lies forward, where the deadrise steepens into a pronounced Carolina Flare bow. So this is a fishing boat, I thought. Flat and roomy at the back, narrow and wave-deflecting at the front. Enough V at the front to cut through the ocean, enough stability at the back to keep you reasonably comfortable. It’s always a trade-off, of course, but you don’t need too much V at the stern on a boat like this, because your main game is trolling at 7 or 8 knots, not rushing around at 25. Though you can do that, too, thanks to the twin CAT C-15 diesels, which, when we opened her up on off Lion Island in Pittwater, took us gently up onto the plane and onto an effortless 18 knots at 1700rpm. This wasn’t a controlled test by any stretch of the imagination, and the water was lake-flat and glassy thanks to the rain, but it felt good to be on a big boat (48ft 8in LOA) that accelerates effortlessly and gives a smooth ride.

Her bow did come up high, however. When I climbed down the ladder from the flybridge helmstation, I found myself looking directly into a high rooster tail, and it felt as though the square stern was pushing down into the water – a situation the helmsman rectified once he got on the trim tabs.

It’s been a while since I’ve been on a test boat that wasn’t built in Coomera, Taiwan or some delightfully named Italian town, and I was curious about how the distributors intended to make the big US boat affordable to Aussies. The answer was simple: a strong dollar. With the Aussie battler approaching parity with the greenback, suddenly the importing of boats built to solid American standards in Wisconsin is no longer commercial suicide. And you get a lot of boat for the AUD$1.2 million that the distributors are asking for the Rampage 45.

First up, it’s built to solid American standards, as I said, which means everything is, well, solid – from the heavy, gas-strutted, ’glass lids over the 136-litre live bait tank in the cockpit to the solid ’glass hull bottom and cored hull sides relieved at all through-hull fittings.

Second, though it’s built for gamefishing (and Rampage hasn’t messed around here – the 45 stops on a dime and backs up in a flash), it’s built for American gamefishermen, which means it’s luxuriously appointed (Americans do love their creature comforts, and who can blame them?) and roomy. Very roomy, because Americans are just bigger. You could fit several full-sized Americans, all armed with rods, in the cockpit, and still have room for an esky full of Mountain Dew.
Actually, you wouldn’t need the esky, since there’s a nice big icebox under the ladder, next to the sink and the tackle storage. The icebox is a bit awkward to get to, under the ladder to the flybridge, but you can’t have everything; they had to put the ladder somewhere. Anyway, my point is the Rampage is more than just a big gamefisher. It’s also a luxury cruiser, and any keen angler angling to convince his suspicious wife that, yes, he should buy this boat and no, it’s not just a big boy’s toy, can point to the boat’s family-holiday qualities.

He could, for instance, point out the master cabin, sorry, bedroom, with its luxurious, queen-sized island bed, and ask her to imagine watching the stars through the hatch overhead; he could point out the cherry cabinetry, ceramic sink and full-sized shower (with a moulded seat, perfect for under-shower lingering) in the ensuite head, sorry, bathroom, with all the room for toiletries; he could lead her into the guest bedroom, and explain how the twin berths are perfect for the twins, and how the clever drop-down Pullman’s berth would be an excellent place to stow number three; he could then explain how the twin berths come together to form a queen- sized bed, should she ever want to take her parents on a trip (a shudder-inducing thought, admittedly, but a small price to pay for such a fine boat); he could show her the pod-style circular shower in the guest bathroom, surely one of the cleverest designs in boat interiors today; he could show her the ceramic cooktop set flush in the solid Corian countertops in the galley, sorry, kitchen, as well as the microwave and the drawer freezer and fridge; he could suggest she take off her shoes to properly feel the padded carpeting throughout the interior, point out the clever accordion blinds that cut out the glare but let in the light, or the large, flat-screen TV set in front of the luxurious, L-shaped lounge. And then he could lead her to the foredeck, a vast expanse of fibreglass moulded directly into the superstructure (so you can lean comfortably against it, facing forward,
and read a novel or simply contemplate the ocean) that is just begging for a few custom-made cushions (she could choose the fabric and the cut) to be spread about. Oh yes, he should have plenty of arrows in his quiver when it comes time to discuss the purchase of his new boy’s toy, sorry, family holiday vessel.

There is just one notable omission on the Rampage: thrusters are optional, and weren’t fitted on the model we tested on. Now, some may say that any seaman worth his salt doesn’t need thrusters on a twin-screw boat. To them I say, try getting to dock in a crowded bay on a windy day when one engine fails (it happens even to the most well-engineered boats – a clump of seaweed or one of those big, pink Hawkesbury jellyfish in your intake’s basket strainer and suddenly your engine’s water-cooling system isn’t cooling and the engine automatically shuts down once it gets too hot). Okay, maybe you can do it, but admit it would be far easier and far less stressful with thrusters. Go on, admit it. If you’re going to buy a boat this big and at this price – and it’s a good price that buys you a lot of boat – make sure you include thrusters in your negotiations.