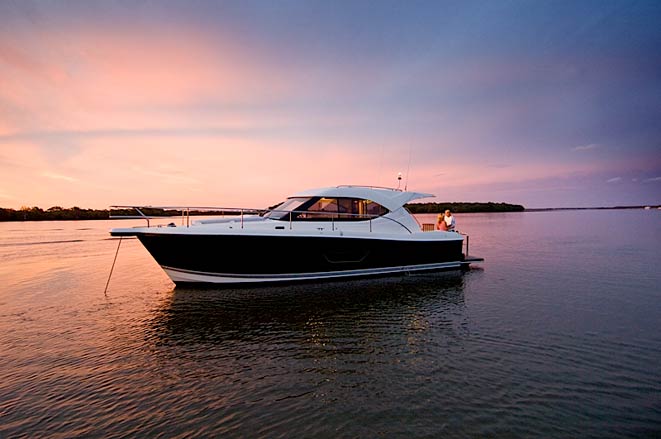 Many Australian boat builders use the Sanctuary Cove International Boat Show as the launching pad for their latest models. At this year’s bash, Rivieria pulled out all the stops to showcase its latest range.

Amid acrobats, musicians and a spectacular laser light show at its Coomera base, the Aussie boat-building icon released five new models to more than 400 invited Riviera owners and media.

As one of the guests, I was impressed by what I saw that night the R47 Series II, the M360 and the M400 Sport Cruiser and the R60 Flybridge Convertible (displayed back at the Cove). But what really grabbed my attention was the new R3600 Sport Yacht. The moment I saw the new 3600 SY (and even before I got the chance to take a closer look at her), I turned to colleague Kevan Wolfe and said: “this boat’s going to sell like hot cakes.”

Why ? Because this new vessel is a complete departure from anything Riviera has produced. It’s got the “look”. That classic, stylish, look that appeals to a broad section of the boating community.

Fast forward a few months and the Modern Boating team were given the chance to test the new R3600 SY in Sydney. After spending a morning onboard the R3600 SY, I knew my predications for this outstanding vessel would come true.

Within minutes of getting my chance behind the helm of the 3600, I was completely at ease and confident enough with her performance and handling to take this boat just about anywhere in any conditions. She’s almost easier to drive than the average family car and probably a lot smoother.

But the 3600 SY’s biggest asset is her new hull configuration. Like many of the world’s best boat builders, Riviera has now introduced mini tunnels into all of its new hulls (these will be incorporated into all Riviera hulls over time).

The mini tunnels give the props clean water to run in, improve straight-line tracking and the hull’s ability to turn without any excessive tail slippage.

But Riviera hasn’t stopped there. The company has also introduced underwater exhausts, which minimise engine noise both outside and inside the cabin, eliminate smoke around the transom and help aerate the water under the hull.

This helps break water surface tension for more efficient planing. The rudders have also been upgraded. The ones fitted to the 3600 SY are longer and narrower than those on previous models and are more like those used on racing boats.  This enables the hull to perform more aggressive turns.

The conditions during the trip down Sydney Harbour as we powered towards The Heads were calm, giving the team the opportunity to obtain exacting speed-to rpm readings. And thanks to the Volvo Penta engine-management system, which comes with the twin 310hp Volvo D6 installation, we were also able to gather accurate speed-to-fuel burn figures.

At the time of the test, the Riviera 3600 SY test boat had 63 hours on the clock. According to the engine-management system, it had averaged 30lt per hour under a variety of running conditions at speed, from idle to flat out and everything in between. During these tests the 3600 SY recorded the following speed-to-rpm and fuel burn figures.

The twin 310hp diesel had more than enough grunt to slide the 3600’s hull out of the hole. The boat does come onto plane with a slight bow-up attitude, but at no time did we have any trouble seeing over the bow. This bow-up angle can be reduced by using the trim tab, which was integrated into the hull on this vessel, but we found we didn’t need too much trim when underway at sea and only used the tabs for lateral trim in the varying wind conditions. Plus, this slight bow-up running angle ensures the sharp bow entry sliced through the swells cleanly.

The only downside is you have to bend down slightly to get a totally clear view well behind the boat. But don’t get me wrong, because on the whole, the 360- degree vision from the helm station is extremely good. As it is from anywhere in the saloon, as the large cabin windows offer magnificent panoramic views of the passing scenery for anyone seated there.

At sea, the electronic controls and light steering make this boat a pleasure to drive. The hull’s aggressive chines and pronounced flare deliver a soft and dry ride. There was obviously plenty of fibreglass used in this boat’s construction, because running noise was minimal and the hull didn’t bang and crash, even head on into the swells. With the saloon doors closed, engine noise was almost nonexistent. But even with these doors open the underwater exhaust do their job of quietening running noise.

This boat was designed with two things at the top of the “most wanted” list. She must have the ability to go cruising in comfort, but still retain the creature comforts needed for entertaining. Her open-plan layout, large all-round windows and clever glass rear saloon doors, the starboard door opens and locks against the cabin wall, while the port half-window opens and locks against the aft cockpit’s roof, combine to bring the outdoors indoors.

The spacious aft cockpit features teak decking, a transom lounge and a folding timber table that’s ideal for al fresco dining for two. It can also be used as a servery for the nibbles when you’re entertaining onboard. There’s a cockpit fridge to keep the drinks cold and a locker unit on each side of the cockpit. A barbeque can be fitted to one and a sink unit to the other.

A stainless steel door opens onto the teak swim platform where there’s a shower to wash off the salt and sand after a swim. There are plenty of grab rails to hold onto when negotiating the walkways around the cabin when going forward. These walkways are a little narrow near the aft cockpit, but they widen as you move forward. Up for’ard there’s a large sunpad for those wishing to soak up a few rays and a thigh-high bow rail if the need ever arose to go to the bow when anchoring.

The saloon features a comprehensive galley to starboard, teak flooring, a pop-up plasma TV in the forward bulkhead and a comfy lounge to port, which doubles as a single bunk and gives the 3600 a sleeping capacity of five. There’s room for two in the forward stateroom and two in the guest’s stateroom on the portside.

The helm station features full instrumentation and a comfortable driving position on a wide bench seat. The massive windscreen wipers are a big bonus. They give the driver a clear view forward. Above the helm and navigator’s station are sliding hatches, which are excellent for ventilation if you don’t want to “arc up” the reverse cycle air-conditioning.

There are also sliding forward widows on both sides of the cabin, which aid ventilation and mean you don’t need to keep the air-conditioning running all of the time. The head is on the starboard side behind the helm.

This boat is surprisingly spacious for a 36-footer. It features a vanity unit with large mirror, a mid-sized toilet and an enclosed shower recess that yes, you can stand comfortably in to wash yourself.

In short, this boat has all the features to make her an ideal vessel for those long, leisurely cruises for two, or a family of four with one of the kid’s friends tagging along. She’s comfortable and luxurious, but not overly opulent, so you won’t have to worry about the children doing too much damage to the woodwork.

Her handling and performance are excellent and if the sea does come up you can batten down the hatches and make the trip home with complete confidence, thanks to her rough water capabilities.

With a starting price of $439,000, before you start adding the genset and the like, the Riviera 3600 Sport Yacht fills a gap in the company’s model line-up and represents excellent value for money.

Riviera is Australia’s largest and most awarded builder of quality Flybridge Convertibles and Sport Cruisers.

It recently celebrated 25 years in the Aussie boat building industry.

In its first year, Riviera built a handful of boats in a small factory in Sydney’s Northern Beaches district of Terrey Hills. Today, the company builds more than 450 luxury boats each year at the largest boat-building facility in the Southern Hemisphere at Coomera on the Gold Coast.

Riviera has invested heavily in people and training and now has more than 1200 dedicated and skilled craftspeople working at its production facility. This includes 200 young people training as apprentices with the company. There are now 13 models in the Riviera range. These include Flybridge cruisers from 33 to 60 feet, Sport Cruisers from 29 to 43 feet and the new 3600 Sports Yacht.