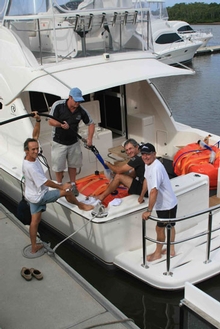 Alain Maron had been dreaming of owning a Riviera but it wasn’t until he was holidaying in Australia’s sunny Gold Coast that he took the plunge and bought a Riviera 42, Off the Hook.

The avid boatie was looking for a bigger boat to take cruising around the many islands and bays in his tropical home of New Caledonia.

“I often take my wife and three daughters; Aurelie, Emmanuelle, and Celine cruising for the weekend.  We also like to go out fishing and sometimes we just stay at the marina and have drinks and dinner on board with friends,” he said.

It was a rough, windy day when Off the Hook left the Gold Coast’s Southport Seaway bound for New Caledonia on 27 February 2009.  Skipper Alain Vilas said the crew, made up of himself as captain, his wife Solange, and friend Marc Sabatier; had been waiting for good weather before departing the Gold Coast, which had been experiencing particularly bad weather at the time.

“We were waiting for a good weather window which came just as the boat was ready to sail.  We didn’t want to miss this opportunity but the south easterly wind was still blowing at 18 knots and when we left the sea was very choppy,” said Vilas.

“When we passed the Southport entrance, Alain was following us on the jetty and he looked a bit worried.  On board we were all confident, even if rolling and pitching made passage making quite uncomfortable, but during the night the wind and waves decreased and everything improved.”

Maron was running on the pier at the Spit trying to signal his crew to come back and delay the trip.

“The sea was very rough and it was very windy, I didn’t realise the weather conditions were so bad when we were under cover at the Southport Marina,” said Maron.

“I was very anxious and I was trying to signal Alain, the skipper, to tell him to come back and delay the departure – I thought I shouldn’t have let them go.”

Five days later, after traveling 770 nautical miles and spending 88 hours at sea, Off the Hook, arrived in New Caledonia.

“It was early in the morning when Off the Hook appeared at the horizon,” said Maron.

“I was with my previous boat and we met Off the Hook at the barrier reef.  We cruised together on the way to Noumea.  This was really exciting, it was a lot of relief after several weeks of preparation for the journey.”

Maron’s first journey in Off the Hook was a day-cruise to Signal Island, a small island in the lagoon a few miles away from the marina.

“It was the first time I was driving the boat and I was somewhat worried about driving it back to the marina but when I am on my boat, I feel relaxed immediately, even if I stay at the marina to do some cleaning or maintenance.

“As soon as we leave the marina, I feel like I am ‘king of the world’ – it’s a good feeling and it’s great to share these moments with friends and family.”

Maron and Vilas have been friends since the early 80s so when Maron bought Off the Hook, he asked his close friend if he knew anyone who could sail her back to New Caledonia.

“I told him I could do it myself with my wife.  I have been sailing since the 70s when I got my merchant navy officer ticket,” said Vilas.

“I also sailed my 46′ yacht from France to New Caledonia with my wife, we did the same trip again in 1998 as I bought a new 43′ catamaran.

“Last November, I sailed a 56′ catamaran with two other crews non-stop for 18 days from Tahiti to Noumea.

“This journey from Australia to Noumea was a short trip, my longest was about one month from Galapagos Island to French Polynesia.

“We had 770 miles to sail, my main concern was fuel consumption; we had spent time to get as much information as we could regarding that point and I decided to take a good safety margin having two extra bladders tanks of 600 litres each on the aft deck, plus an extra 300 litres in the centre hold; which made a total of 3800 litres including the boat’s 1800 litre aft and 500 litre central tanks.”

The weather was bad the week prior to Off the Hook departing the Seaway but once on board, Vilas said the crew was confident.

“Even if rolling and pitching made passage making quite uncomfortable,” said Vilas.

“During the night the wind and waves decreased and everything improved, we were very attentive to match the good fuel consumption and regulated engine speed to match it.

“Every four hours I checked to make sure everything was alright in the engine room.

“At the beginning we were running 1100rpm at 7 knots as the sea was rough, and 10 litres/hour per engine.

“Later we increased to 15 litres/hour at 1180 rpm, which gave an average 9.5 knots, which was better than expected.

“Every four hours we increased speed to 2500 rpm for 5 nm to clear the engines.”

During the first night, the bladders tanks started to move on the aft deck after their ropes were loosened from water.

“At that time the boat was overloaded aft with those tanks and wave crests were flooding the aft deck sometimes,” said Vilas.

“Sunday morning, the weather was fine and we decided to transfer the fuel from the aft bladder tank to the boat’s tank.  It took us one hour to transfer 1200 litres; we fed it directly into the side fuel inlet and it was very easy to do with an external removable fuel transfer pump with all the hoses ready to connect.

“We had some trouble with the nav display, which went off sometimes but we had two other GPS units on board with two nav computers.”

The sea was rough again on Monday with ESE winds at 15 knots but by Tuesday the weather had improved and Off the Hook increased her speed to 2000rpm as they approached Dumbea passage.

“About seven o’clock we went inside the lagoon and met Alain who had come to meet us with his family on another boat,” said Vilas.

“It was a good crossing and the boat handled the passage extremely confidently. The only problem could have been the fuel overloading at the beginning and a trip like this must only be done with very good weather forecast – we would all do it again if we had the opportunity.”

Despite being Maron’s fourth boat, he describes it as ‘the most beautiful boat’.

“I really like the design of the Riviera open flybridge cruisers, as well as the nice layout of the cabins.  Every boat owner says his boat is the most beautiful boat of all boats but I really think the Riviera 42 is the best,” Maron said.