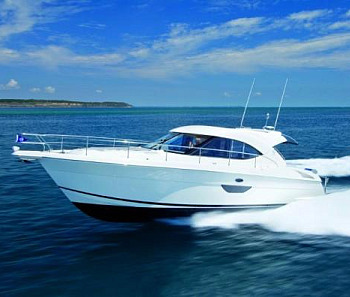 A boat, a chef and a tropical island – it’s a tough job but someone’s got to do it.

The team at Riviera can always be relied on to put on something special when launching a new boat, even if it’s only a boat test. The marketing and PR team headed by Stephen Milne and his offsider, Denby Browning, had arranged a photo shoot of the brand new Riviera 4400 in the Great Sandy Straits and invited my wife, Jan, and I up for a couple of days to sample the lifestyle the new boat had to offer.

A skipper had been organised and a professional cook was onboard. Sounded good, and not being ones to knock back a good thing we jumped onboard an aeroplane and headed up to Hervey Bay. This was going to be a true lifestyle test.

We flew in broken cloud and into a northwest headwind most of the way. This made the going a little bumpy, and to complicate matters the wind was blowing across the runway at Hervey Bay, so we were in for a crosswind landing. Great!

Down safely we taxied to the terminal where Denby was waiting to drive us to the marina at Urangan Boat Harbour. The boat harbour is a main jumping off point for Fraser Island and is a tourist precinct with a variety of restaurants and souvenir shops. It’s also a haven for the many cruising yachts that venture north.

Our skipper Jim was anxious to get going, and as soon as we were onboard the lines were slipped and we motored out through the breakwater. Close behind came another Riviera, a 41 skippered by Neal, with Billy our chef onboard. “This was going to be alright,” I thought.

The plan was to head over to Fraser Island for lunch. By this time the wind had picked up to about 20 to 25 knots and the sea was chopping up. The Great Sand Straits is a vast expanse of water, but it is extremely shallow, wander outside the channels and you could find yourself in all sorts of trouble. It pays to have an up-to-date copy of Beacon to Beacon with you even if the boat is equipped with a chartplotter as ours was.

On the way out we took a few waves over the bow that hit the windscreen but the windscreen wipers took care of that. I was thinking how well the boat was riding as we punched into the chop.

The 4400SY is the first Riviera to be powered by Volvo Penta’s IPS (Inboard Performance System) and this was the main reason we were here, to test the boat in conditions like this. Despite the IPS, Riviera have opted for the standard Bennett trim tabs instead of the Volvo Penta QLs. With IPS the boat rides fairly flat anyway, but trimming the bow down helped as we punched into the sea.

By the time we reached the north cardinal mark at the end of the channel and turned right, I was beginning to be impressed with the way the boat handled the conditions.

The 4400 Sports Yacht is the first boat in the world built specifically for IPS, other boats have had their hull modified to accommodate the pods. The design continues the indoor/outdoor character of the first award-winning Riviera 3600 Sports yacht, which was also carried on to the 4700SY. The lines have been re-jigged to give it even more visual appeal and the bonded windows each side of the hull are also a feature which makes the boat standout.

In contrast to a standard shaftdrive, the IPS engines are positioned well aft so that there is more space forward of the engine room.

The Riviera designers have taken advantage of this and the result is a two cabin, two-bathroom layout with a huge full beam second cabin amidships. It also adds more room to the main saloon with a lounge down one side and a two-seat helm station on the starboard with the galley behind it.

The helm seats were very comfortable and would be OK in calm water, but in the open sea as we were bouncing around I felt the passenger seat needed a fold down armrest to stop the occupant falling out.

Riviera has built a lot into this boat considering it’s a 44-footer. A machinery room housing a water heater and the plumbing manifolds is accessed from the second cabin and in the companionway they have managed to fit in a washer dryer with room above it for sheets and blankets or it could be used as a pantry.

As we came around side onto the sea the tabs were adjusted to keep the boat running flat and the motion settled down. As we approached the northwest corner of Fraser we started to look for a spot to anchor for lunch.

We found a spot in about 2.8m of water, it was low tide so we had plenty of water under the pods. We tucked in behind a sandbank at the entrance to Putloo Creek. No sooner had we dropped the anchor than a decent size shark cruised lazily past. There would be no swimming today. Billy went straight to work and produced a seafood platter of local prawns, sand crab and a salad washed down with some very agreeable wine. If this was what the next couple of days were going to be like, bring it on.

Lunch over we needed to find somewhere to anchor for the night. The western side of Fraser was too exposed, so we decided to head down to the Mary River. It was a fair distance past Kingfisher Resort, but the 4400 made short work of it, loping along at 28 knots and using only 57lt of fuel a side. As we slipped past the North White Cliffs flocks of frigate birds worked the schools of mackeral. Billy had brought his rods along, but reckoned it was a waste of time dragging a lure through the school. He had tried it the day before and the fish just ignored them.

It was late afternoon when we nosed into the Mary River behind a settlement called River Heads. We found an anchorage near some of the local boats and dropped the pick for the night. Denby produced a bottle of Bundy and it was very pleasant sitting in the cockpit as the sun sank behind the hills in the hinterland.

The cockpit is probably where people will spend most of their time. There is a full-length lounge across the transom with a table. It’s made for al fresco dining and we did just that as Billy went to work on the barbecue. It had been a long day and we all hit the sack early. Jan and I were in the front cabin and the lapping of the water on the hull soon had us in slumber land. Just after midnight I woke up to some strange sounds.

Even though I was not in charge of the boat, after more years than I care to remember on the water I still react to noises that don’t sound right. This one sounded as if the anchor was dragging across rocks.

I found the trouble, the boat was swinging in the wind and tide and the anchor chain was scraping on the sides of the bow roller. A snubber would soon fix that, we didn’t have one, so we just had to put up with it.

We woke early, had a hot shower and sat down to breakfast in the cockpit. Billy had his made own version of Bircher muesli, it was so good Jan asked him for the recipe. On the way back to the marina we punted along at 24 knots with about 300rpm left and plenty of tab on to keep the bow down. The boat ran easily, so much so I was tempted to put the autopilot on, but why waste the opportunity to steer the boat. We passed a couple of whale watching ferries as we came around the north cardinal into the marina channel. Most of the passengers were out on the foredeck and I wondered how long before they went inside soaking wet.

With the IPS comes the joystick docking system and Jim suggested Jan try docking the boat. By that time the wind was blowing into the marina at 25 knots or so and she had never used the joystick system before. Undaunted, and with a little coaching, she docked the boat alongside so softly it barely touched the pontoon.

It was the perfect end to a very enjoyable couple of days, although we never did get to open the sunroof. It seems even paradise gets cloudy sometimes.

The following performance figures were recorded in calm conditions.