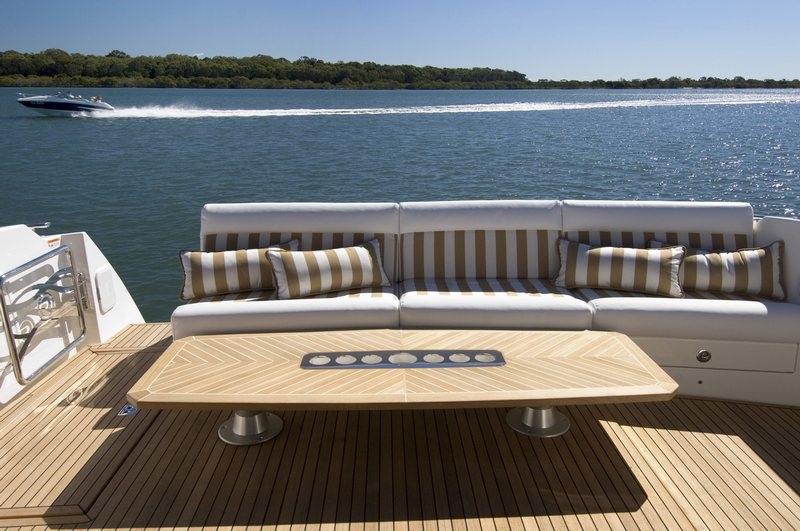 It started with the Riviera 3600 Sports Yacht. The contemporary sports yacht has proved so popular that Riviera has stepped up another rung and introduced the 4700 SY. The 4700 SY is a big step for Riviera and has raised the bar for Aussie designed and built top-of-the-line sports yachts. The 4700 Sport Yacht is a product of Riviera's R&D department, which is kept very much under wraps in a separate building at the Coomera factory.

When I was first introduced to the 4700 Sports Yacht it was in one of the factory fit out pens with a team of workmen swarming all over it. They were rushing to put the finishing touches to the brand new boat before trucking it to the Sydney Boat Show.

Riviera's CEO Wes Moxey had taken time out from his busy schedule to show me over the boat and as we negotiated our way between tool boxes and electric power leads it was evident that he was pretty chuffed with it. "The 4700 is a combination of European design and Australian practicality," he said.

OCTOPUSSY
Perhaps the boat is best described by Riviera's Concept Design Manager, Neil McCabe, when he says it is a "global boat". Riviera enlisted the expertise of Dutch naval architect, Frank Mulder for the 4700 project. Mulder, among other things, designed the world's fastest mega yacht, Octopussy, which has a top speed of 53.17 knots. That was until he was commissioned to design Moonraker. This 35.36m (116ft ) mega yacht can charge over the ocean at 66.7 knots.

Mulder's association with Australia's largest boat builder began with the design of the Riviera 60 hull. His brief for the 4700 was to produce a bluewater hull with the integrity of the Riviera flybridges designs. The hull has a fine entry with a flair in the bow and tunnels that give the propeller shafts a 11.5-degree entry.

A housing for the stern Thruster has been built into the stern and as well as keeping the thruster out of the bilges it adds buoyancy, so much so that the hull rides flat without the bow up and the bum pointing to the ground. The brief also included the addition of a garage under the cockpit deck to take a 3.1m Zodiac with a 15hp outboard on the back. Now this is unique in a single-deck boat. It's accessed by lowering the hydraulically operated swim platform and winching the inflatable into the garage and raising the platform again.

At 16.69m overall length (54.9ft ) the 4700 is a big volume boat and needs careful handling in a tight marina, but it is not daunting. This is where the Caterpillar electronic controls are handy. In synch mode they can be set to a slow 550rpm idle, so there is no chance of accidentally pushing the throttles too hard forward and having an "oh sh.." arrival in the marina.

LAYOUT
The Riviera team has made very clever use of the interior space, again it is unique for a boat this size. It starts at the transom with the garage door with a smaller door set in to stow the fenders in brackets, and a barbecue hidden in another locker, and there is still room for a couple of huge lockers either side of the garage. There is provision to add a passerelle that slides out from the centre step up from the boarding platform. The aft cockpit also features a rear bench seat and an Italian hydraulic table that drops down to form a sun lounge – that's all for the European market. The rear saloon window folds up to open the saloon right up and with the big sliding roof and the side windows SHE'S A QUIET LASS It's a very quiet boat too.

Idling along at 650rpm the sound level meter record a very low 64.6dB and that was with the back door and window open. At 1420rpm and 15 knots the boat was well up on the plane with a sound level of 75dB and jumped very quickly up to 2075rpm and 30 knots when asked.

At full song of 2364rpm the GPS showed 34.8 knots and the sound meter 81dB. Best cruising speed was around 23.5 knots where most people would generally drive the boat. At this speed the readings were a fuel fl ow of 140lt per hour, and a sound level of 75.5dB as the engine ticked over at 1750rpm. Much of the noise normally associated with a boat of this type has been reduced by the Halyard underwater exhaust system. Halyard is a British company that specializes in reducing noise and vibration in super yachts. This system is certain to fi nd its way into other Riviera models in the near future. open it gives true meaning to an outdoor living lifestyle. Or if you want to be nice and snug the whole lot closes up into an enclosed area, and with the air-con running it is very comfortable.

The big opening roof has proved popular on the 56 and sets the 4700 apart in the convertible market. It's waterproof too. During initial testing off the Gold Coast, the engineers took a green one over the top and not a drop leaked through. The big feature is the cockpit, galley and saloon all on the same level, that's if you don't count the 150mm step up from the cockpit to the saloon – a requirement under European CE rules. The finish on the cherrywood cabinetry is superb and has been applied by the new robotic varnishing shop Riviera has installed. In the past, the varnish shop has been a bottleneck in the production line.

The helm station is classy with a couple of very comfortable and stylish locally made Rae-Line seats built to Riviera specs. The driver's seat can be adjusted electrically and two individual footrests have been installed – one for when the driver is sitting up on the bolster and the other when sitting normally. Just like motorcars, though, most boats have a blind spot and on the 4700 it's the big pillar that supports the windscreen. I found that, while the rally-style seat and the position was comfortable, I didn't like the blind spot. I found that by sitting in the middle of the two seats and sideon to the helm, the driving position I prefer when cruising anyway, the visibility was much better. If it were my boat I would go for a single twoup seat; it's a matter of choice.

BELOW DECK
The big gains are in the accommodation. The steps down to the three-cabin, two-bathroom layout were easy to negotiate. There is also a two-cabin layout that uses the space occupied by one of the cabins for a
lounge area. This opens up the forward end of the boat considerably, and can be used as a separate getaway or a place where kids can play safely without getting under the feet of adults. The portside, two-bunk, cabin is an actual step down and the headroom is so high that there are very few people who would bang their heads on the cabin roof.

Riviera has cleverly used the void space under the helm station as a dedicated machinery room. All the connections and plumbing are in the one spot and easy to get at through a door in the cabin. Optional twin Caterpillar C12, 715hp diesels powered the 4700 – C9 575hp diesels are standard. Owners who take a pride in keeping their engine rooms pristine will love the gelcoat fi nish – it will be so easy to keep clean. Future models will have a fully moulded liner. To balance the boat as fuel is used, the 2400lt fuel tank is mounted amidships in the hull and the 800lt water tank is under the saloon floor.

The fuel tank also acts as a sound insulator to reduce machinery noise in the sleeping cabins. Aft er the Sydney boat show the boat was shipped back to the Riviera factory at Coomera on the Gold Coast where any little bugs were fixed and the craft commissioned. Until now I did not have the opportunity to drive it and see how it performed, especially in the open sea off the Gold Coast.

SEE WHAT SHE'LL DO
So with Riviera Gold Coast sales manager, Randall Jones onboard we set out to see what this 'little beauty' would do. The six-knot 'cruise' down the Coomera River to the Broadwater gave us time to chat and for Randall to point out some of the extra features on the boat. Such as the video cameras that feed into the Raymarine E120 screen. One camera covers the engine room and another the back of the boat. A third can be mounted over the anchor to see what it is doing when retrieving it. Saves someone having to stand in the bow calling its position, which can be confusing at times. The automotive-style moulded dash is three-tiered and finished in a flat grey colour.

Riviera has tried different colour combinations but has always come back to this colour for best glare reducing results. All the lockers are cedar lined and there are even square holes for the Bundy bottles in the liquor cabinet. How many Aussie builders forget the boaties favourite drink, well mine anyway and don't make provision for it in the cabinet. Other features include mitered bunk corners, glass bowls and frameless shower doors in the bathrooms and a pop-up flat TV screen. Riviera's R&D team have listened to their customers, particularly the ladies, and have come up with the goods. The trip down the river was very relaxing. In the past Riviera has used Quickshift controls, but the Cat system is so much better.

We set the synch at 650rpm – high idle is 770rpm – and a speed over the ground of 7.7 knots. Th e advantage of the Cat system is that in synch mode the revs can be set up or down in increments of 50rpm by pushing a button. There was about a 2.5m swell at the Seaway and the boat literally ate it. When I checked the GPS we were traveling at 18 knots.

Rather than crashing through the swell the boat was riding over the top and was very much at home. It was obvious that this is where it belonged – off shore. The 4700's one of the easiest and predictable boats of this size I have driven. The power steering was just right, it is genuine fingertip control steering, and it went where it was pointed without having to overcorrect to bring it back on line. It didn't matter which way we were pointed, straight into the sea, side on or downwind the 4700 felt at home. Frank Mulder has worked his magic and produced a very efficient bluewater hull.

The Riviera 4700 SY is a very social boat with a contemporary clean look, it has all the toys and it's better finished than many boats in the European market where it is obviously going to compete. But for Australian conditions it is also a very practical family boat well suited to a family of mum and dad and a couple of kids. There is even room for the kids to invite friends for the weekend. With the 3600 and 4700SYs, Riviera is targeting the global sports yacht market. It's a segment that the factory has not been strong in previously because of the demand for their flybridge designs.

The 4700 SY is a premium craft at the top of the line in the sports yacht market and Randall Jones would be happy to start talking around a tad over the $1 million mark.

PERFORMANCE
With two people onboard off the Gold Coast the Riviera 4700 SY returned the following performance figures.