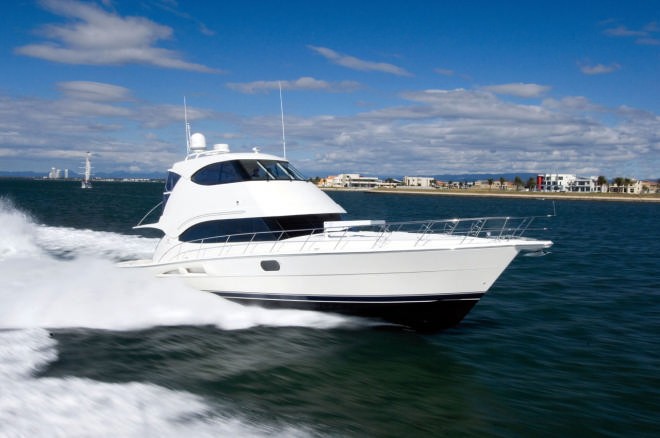 The New Tardis – Riviera’s latest luxury cruiser will transport you to a new dimension.

Watching the Riviera 56 idle up to the fuel wharf at the Runaway Bay Marina, I can’t really tell if this is the new 56 Enclosed I am here to test, or a Riviera 60. They look almost identical in the size stakes, but on closer inspection there are some obvious differences.

The new 56 has internal stairs to the flybridge, her galley is located aft on the portside and she has large elliptical portholes amidships, where the older 60 has two small ones on each side. Even so, from a distance, most will have trouble differentiating between the two.

Drawing the line
There are some interesting comparisons between the 56 and 60, which are worth pondering. These boats both perform as well as each other, their economy is almost identical, they have similar interior volumes and are both designed for offshore work. But now for the coup de grace, the Riviera 60 Flybridge Convertible sells for a base price of $2,324,363, while the 56 Enclosed has a price tag of only $2,094,080. That’s a $230,000 saving on a vessel that’s a generation ahead in terms of design and construction, but is basically the same size as the 60.

Renowned Dutch naval architect Frank Mulder designed the Riviera 60 Flybridge. He started with a discontinued Riviera 58 hull and reshaped it, adding more aggressive chines, mini tunnels for the props, underwater exhausts, trim tabs integrated into the hull and a lot of other tweaks.

But when Mulder conceptualised the 56 Enclosed, he started with a virtual blank screen. This boat is the first Riviera to be fully computer designed and moulded, which ensures an accurate fit between hull, deck and superstructure. The swim platform and hatches are also built using the latest Light Resin Transfer Moulding (RTM) technology, which is a closed moulding system for improved quality and strength.

But they’re not the only firsts for the 56. All of the varnished wood and panelling onboard this boat has been done in Riviera’s new varnishing department. The interior joinery is coated by a fully automated hi-tech varnishing system that operates in an entirely dust-free environment and covers each panel with the exact amount of coating for a perfect finish, every time. And one look at the high gloss finish of the wood used in this boat with attest to this machine’s abilities.

New for Riviera, the fully functional galley, dinette and lounge are all on the same level. The galley forms a U-shape like the 60, but it’s sited aft and well suited to budding chefs. The dinette, immediately forward of the galley has a sliding-top that opens to reveal storage for drinking glasses.

The saloon is as luxurious as a five-star European hotel, probably more so. There’s a 32in flat-screen TV, Bose sound system and air-conditioning, of course. The 56 can also boast a wide internal staircase leading to the massive flybridge. This means that for the first time on a Riviera Flybridge, carrying drinks and food to those topside is an easy affair. And going by the size of this flybridge, that will happen a lot, because this bridge was designed to be ‘party central’.

The forward helm position has a companion chair and a full-beam dash that can accommodate three 150 monitors. There’s an L-shaped lounge with table and more seating facing aft near the rear docking station. The 56 Enclosed is a luxury three-cabin, three-head cruiser. The opulent master stateroom is amidships, the equally luxurious guest’s cabin is in the bow and there’s a three-bunk cabin to port, which is a great place for the kids to crash out in.

But it’s really the aft cockpit where that makes this model something special. An armour plated glass window forms the bulkhead behind the galley. This hinges upwards and locks up out of the way. Then, when you open the rear saloon doors, you’re ready for some alfresco living.

Fishermen’s friend
From a fisho’s perspective the Riviera 56 Enclosed has all the credentials to make her the ultimate game fishing platform. The massive self-draining aft cockpit measures 4.6m x 3.2m. It has high, heavily padded gunwales for stand-up angling and a reinforced floor, so a game chair can be mounted securely. The gunwales are free from cleats and other line-catching obstructions. There’s a big live bait tank, a deep chest freezer to store the pre-rigged baits in, a bait-prep bench, a sink with a hot/cold water tap and a barbeque.

The cockpit has tackle lockers, rod racks, floodlights, under-gunwale gaff racks, in-floor removable fish bins (for easy cleaning), fresh and saltwater deck wash and more. Fit a set of outrigger poles and she’s ready to fish. Fork out an extra $50k for the marlin tower and upper station and you’d be the proud owner of one of the best game fishing platforms in the world.

Riviera has put 25 years of design, technology and customer knowledge into this boat. The standard of workmanship and quality of fixtures and fittings is obvious from the moment you step onboard, but it’s her three-cabin three-head layout that will appeal most to both fishos and cruisers alike.

But the big plus is the money you can save by opting for the 56 instead of the 60-footer. All that extra cash can be spent on more important things such as top-of-the-line electronic, remote cameras, a game chair and a beautiful stainless steel marlin tower.