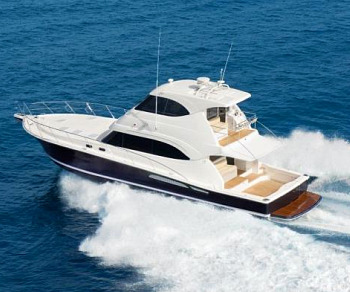 The Riviera 61 Enclosed Flybridge is both a luxury boat for entertaining and long-range cruising motor yacht.

The bar holds 24 bottles—even the square shaped.  The saloon, bar, dinette and galley make a sociable one-level space.  The enclosed flybridge is an impressive space for entertaining as for navigating.

Black is the new black.  And it looks as good as it ever has shining on the topsides of the Riviera 61 Enclosed Flybridge.  Riv’s 61 needs its stylish looks to steal some attention from the big 70 launched in 2008.  Some boat buyers might ask that if you’re going to get a 61, why not just splash out and go for the 70 now that it’s available?  Others might find the 61 to be a nice progression from the 56.

Whichever side of the fence you sit on, there’s plenty to discuss by the time you reach the 61st foot of this boat, so let’s not bother about the nine extra feet for now.

I can’t look at a boat this size without daydreaming about circumnavigating Australia, well, the top half of it anyway… and maybe the islands of the South Pacific. So I was interested in learning more about the distance she can travel.

Riviera has already conducted range tests on the 61 Enclosed Flybridge, with the boat under full load.  This includes 5700L of diesel and 1000L of water.  According to riviera, at 1000rpm, the twin 1015hp turbo diesel caterpillars push the 61 to 8.7 knots using approximately 51L per hour.  The fuel economy and range at this speed, in reasonable conditions, would therefore make it possible to cruise from approximately Sydney to the Whitsundays without stopping for fuel.  And as a safety precaution, these calculations were made allowing for 10 percent of the fuel to be kept in reserve in case of emergencies.

Cargo weights will vary, as will the sea conditions, both in turn affecting the range figures of a boat.  However, this is still an interesting guide to the capabilities of the 61, which would be a nice base from which to explore the coast—or head to New Caledonia!

Let’s take a tour of the new Riviera motor yacht

For those interested in a spot of fishing (and if New Caledonia is your destination then I recommend it!) the cockpit will accommodate you.  A tow jam around the periphery and an optional padded bolster will help save your back when pulling in New Cal’s monsters of the deep.  A storage locker in the transom can be converted into a live bait tank with a glass window and rod holders are an optional.

Two fish wells live under the deck and are insulated and removable—clever.  And they haven’t skimped on the size: a decent size tuna would have room to move.

For those who prefer chicken for dinner, the fish wells provide good storage and the cockpit makes a good space for socialising or warming in the sun.  It has plenty of practical features.  Holes for mooring lines, large lockers either side of the cockpit for ropes, another locker portside of the potential live bait well, one more locker under the deck (with access to steering), a hot and cold shower and a deck wash. There is a sink with storage underneath to starboard of the saloon door and a tackle locker big enough to fit a few of the deep 3600 size Plano stowaway trays.

More storage space is available under the cockpit to saloon companionway. To port there is mezzanine seating with beverage holders. This sits atop a refrigerated storage compartment.  Guests can sing along to The Mules CD playing on the Bose surround sound system, or chat over a classical orchestra.  A large window opens from the saloon, creating an open sociable entertaining area inclusive of all party goers, from those on the mezzanine, to those in the saloon, dinette and even the chef working away in the galley.

Indoors, the saloon lounge seats a relaxed four and are finished in New Zealand leather.  They are made in-house by Riviera.  The saloon’s configuration is standard but owners can change the colour of the lounges should the fabric clash with their eyes or remind them of a football team they dislike.

A stainless steel handrail set into the roof runs along the centreline from the saloon entrance to the galley, providing safe passage for those experiencing rough weather or whisky judgement.  Simple, clever, but not used by enough boatbuilders.

Poker fans can make use of the American cherry wood coffee table, also manufactured in-house. The thirsty can make use of the impressive bar.  It features refrigerated drawers and a pop-up liquor cabinet bathed in purple LED lights—just in case you need a reminder you’re living the good life. The bar holds 24 bottles, including those of the square variety.  There is also an icemaker for those who like one on the rocks.  I noticed the ‘Riviera
promotes responsible drinking sticker’ after counting to 24, but considering you might need a range of spirits for a cocktail party, or if you’re cruising to the extent this girl can and like a red with dinner, then there’s little excess.  In fact, you should probably stow another box in one of the many storage areas, just in case.

The drawers at the bar—and throughout the entire 61—feature what riviera call ‘soft close’.  It’s a great invention that makes it impossible slam drawers. The mechanism is like an autopilot taking over the final stage of each closure ensuring a soft landing.  They are the most polite drawers I have met, and match the style and manners throughout the 61.

If you want to kick back on the saloon lounge and watch a movie, there’s a 40in Sony Bravia television screen on which to play your DVDs, but you’ll have to look across the dinette forward and to starboard.

The dinette hides more storage underneath, which slides out for user-friendly access.  There is space for six diners, or better suited to four if you want impress with a full three-course meal, which the portside galley opposite is capable of.

The galley features two fridges and two freezers. add this to the other refrigeration throughout the 61 and you get more of that itch to go long-range cruising.  The four soft close drawers remind you to relax as the dishwasher does the hard work.  There are four power outlets for phone chargers, kitchen gadgets or whatever else you might need to plug in.

The granite bench tops, four burner cooktop, convection microwave and griller give the master chef room to work some culinary magic.  There’s a phone to the bridge to let the skipper know when dinner’s ready, or for the skipper to motivate the chef to hurry up!

The master stateroom is an athwartship double berth with ensuite.  It features lots of storage for clothes—the wardrobe even has a shelf for the lady of the ship’s shoes.  For things you don’t need so often, there’s a large locker under the bed, which lifts open with the help of a hydraulic ram.  There is natural light if desired, or reading lights for a bedtime story.

The ensuite’s pride and joy is a generous shower stall, plus there’s a toilet and wash basin.  The floor is amtico.

The VIP guest cabin double berth has a less spacious ensuite, but still with shower stall, toilet and washbasin.

Other guests sleep in bunks in two separate cabins.  The forward cabin sleeps two and has second door access to the day head—which has a toilet, washbasin and shower stall.  The second has one bunk and is also home to the washer and drier.

The Riviera 61 Helm – the Enclosed Flybridge

Back through the saloon and up the internal staircase will take to you to the spacious Enclosed Flybridge.  The wheel is central on the bridge.  The navigation systems are always optional on Rivieras to allow owners to choose their own marine electronics adventure.  This a much better arrangement which avoids aftermarket alterations for the rightfully choosy.

The skipper has a pedestal chair that moves every which way for comfort and the navigator has the same to starboard.  The bridge lounge to port seats five to six people who can enjoy snacks, drinks or magazines on the coffee table/dining table fold out.  And it’s all in air-conditioned comfort.

There is a television, another liquor cabinet, fridge, sink, general storage, power outlets, sunroof and sliding windows.  This makes it a self-contained space useable by a crew that wants to watch a movie rather than venture down to the saloon for fear of being dragged into a drunken karaoke choir locked arm-in-arm singing Sinatra’s New York, New York. But if it sounds funny enough, they can watch it in safety on the three camera video system.

And for the next day’s fishing, the crew can utilise the steering station on the aft bridge deck to back down on a marlin or to dock after the return voyage. This deck has a large opening window, seating, an awning and 10 stainless steel rod holders.

The Voyage on Sydney Harbour

Our passage through the Heads of Sydney Harbour and beyond was unchallenged by a quiet sea and Riviera’s 61 Enclosed Flybridge was untroubled while sliding onto the plane and working towards top speed.  If only Riv would lend it to me for a year’s voyage.  That test would better suit this long-ranger.