Riviera announces its next SUV model The New 565 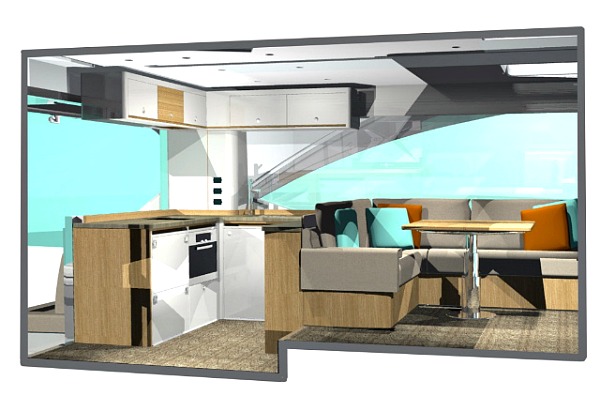 Riviera’s design team are putting the finishing touches on the second model in the new SUV range, the sleek, stylish and very spacious 565 SUV, which is due for release in May at the 2013 Riviera Festival of Boating, which is held to coincide with the Sanctuary Cove International Boat Show.

The 445 SUV met with immediate popularity following its launch in August last year, with already eight 445s having been sold internationally and around Australia.

This latest luxury cruiser from Australia’s largest and most awarded luxury boat builder is a culmination of more than 33 years of boat building design, experience and extensive owner feedback from around the world.

Bearing Riviera’s classic hallmark design, the new 565 SUV has been crafted withRiviera’s rich-heritage in mind.  Combining the high performance, blue water cruising abilities of the classic Flybridge with the fish raising abilities of the Offshore Express, and the single-level leisurely entertaining features of the popular Sport Yacht series, has created a vessel like no other, a true bridge between all of them.

Riviera’s head of design, Stephen Ford, said the new 565 SUV design was based on a similar platform to the popular 53 Enclosed Flybridge.

“The forward cabin has an optional layout with the choice of either a queen size island bed or a triple bunk bed arrangement, as displayed on hull one.  This cabin also features large hull windows and deck hatch for ventilation,” Mr Ford said.

“The third cabin has two metre long bunk beds, making this vessel ideal for extended stays aboard with family or friends.”

The new 565 SUV has many clever design and aesthetic features such as, the sleek, low profile hardtop with two large manually sliding glass sunroof hatches, which bring an abundance of natural light and fresh air into the saloon.

“There is great all round visibility from the helm and the raised seating area in the saloon, large opening side windows provide a real indoor-outdoor feel,” he said.

“The large helm station to port has plenty of room for electronics including three display screens, controls and the Volvo joystick.  There are four high-quality helm chairs, two of which swivel 180 degrees to face the saloon allowing occupants to join in the conversation in the saloon area.

“The saloon features an L-shaped lounge and dining area to port with storage below. We have customised the dining table to allow it to swivel 90 degrees and drop down level with the lounge to create a double bed with cushion insert.

A large awning window and glass sliding door opens the galley into the cockpit area, creating one large entertainment space.

A key design feature that sets this model apart is the expansive and uncluttered cockpit space with plenty of storage including, an insulated fish bin to starboard, plus clever storage inside the engine room hatch – simply lift up the hinged cockpit floor and the two large fore and aft fish/storage bins lift with the deck whilst a third square storage compartment is revealed.  The mezzanine seating to port also features a top loading refrigerated cool box under the seating.

There is the option to have a barbecue centre in the transom with barbecue, sink, rubbish bin and storage or optional live bait tank or standard storage bin, as well as an optional hydraulic swim platform for a smaller tender.

Mr Ford said another clever design feature on this vessel was the full glass panel on the starboard side of the sliding door, which provides good visibility to both the transom corners from the helm.

“Adjacent to the galley is a wet bar, which features Corian benchtops throughout, a second bank of double drawer refrigeration and an ice maker, plus glass and drinks storage, and a television.

“The new 565 SUV’s décor gives a modern and contemporary feel.  Hull two will show the new style interior design, which features two-pack painted finishes, satin finish American oak timber, wall fabrics and timber flooring, which give a true Euro feel. Hullone however, will feature a custom décor utilising Riviera’s traditional Cherry interior requested by the owner.  Such interior versatility demonstrates Riviera’s flexibility to be able to create each owner’s dream boat by customising many aspects of the boat.”

The mid-ships fuel tank with 3,500 litres fuel capacity allows the twin Volvo IPS 900 engines a cruising range of about 390 nautical miles.  With a moulded hull length of 56’5” and a beam of 16’10”, this striking new model will cruise at 23 to 25 knots and achieve a top speed of more than 30 knots.

In 2012 Riviera celebrated the launch of its 5000th boat, the 445 SUV, a significant achievement in the company’s rich 32-year history.