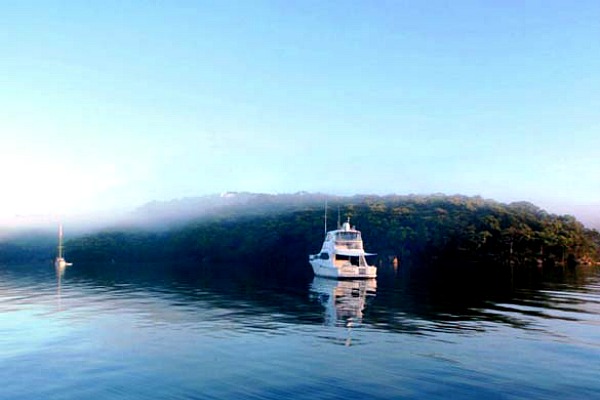 As the sun came up over the horizon on a sunny, yet crisp, February morning, a fleet of five Rivieras ranging in size from 47 to 51 feet headed East as they crossed the Southport Seaway and then headed south, bound for Yamba, some 100 nautical miles from the Gold Coast.

The fleet consisted of Riviera 47 Living the Dream with Mike and Jan Bolton, Don Stalker, Adam Dando and James, Oliver and Jen onboard; a Riviera XX Double Trouble with Rod, Julie and Ben Crawley on board, Riviera 47 Karizma with John and Maralyn Fitzgibbons, Meg and Matt on board, Riviera 47 Sea Legend 3 with Grant and Jan Hedges on board, and Riviera 51 Indulgence with Peter and Gail Butler, Chris and Richard on board.

The crew departed at 6am with a light five to 10 knot southeast-northeast, it was an easy five hour trip (100 nautical miles) to Yamba.  Upon arrival the girls strolled to the shops for a little rest and relaxation before the evening entertainment which began with a quiet drink at the local Pacific Hotel, watching the sunset over the water, followed by dinner at the local Chinese Restaurant.

“The following morning we had a pleasant 120 nautical mile cruise down to Port Macquarie, where the Sunday locals really enjoyed watching the fleet come in. That evening we met for a quiet barbecue on the back of the boats and prepared for an early start in the morning,” said Julie Crawley.

The next leg of the journey, 80 nautical miles from Port Macquarie to our next port of call, Port Stephens was a breeze. We had dead calm seas and plenty of dolphins in our wake.  The staff at Peppers Anchorage Marina were outstanding.  Chris joined “INDULGENCE” and we all had a great dinner at the Merretts Restaurant.

“We spent Valentine’s Day enjoying a Hunter Valley Winery Tour, visiting local wineries for tastings, the Smelly Cheese Shop and the Chocolate Shop.  Don Stalker was the first to be awarded the “Dummy” for losing his cool with the bus driver.”

A later start the next morning was welcomed, and the trip out of Port Stephens was quite rough, the waves really stood up for the first part of the journey.  Huge ships lined the coast off Newcastle which was an amazing sight.  Pittwater was next on the agenda.  After an 80 nautical mile trip, it was a welcome sight to pull into Refuge Bay with the lovely beach and huge waterfall.  A beach barbecue was enjoyed as the crew sipped on champagne and watched the sunset.  Julie Crawley was the next to be awarded the “dummy” for a terrible picking up of the mooring buoy.

The following day, Don Stalker departed and the Bolton family arrived.  There were minor repairs to some of the boats, and Meg and Matt joined “KARIZMA”.  The Crawleys and Hedges explored the waters in their rubber duckies, passing Cottage Point and within six miles finding a great marina called Bobbing Head, where they enjoyed some lunch with a few wines.

“That evening we had our ‘Italian Night’, and everyone got dressed up for the event.  Italian food and good red wine started the evening, and we were surprised by the beautiful soprano of an Opera singer from the Sydney Conservatorium, who arrived to entertain the crew with a few Italian songs.  The whole of Refuge Bay enjoyed a still calm night, with the romantic sounds of a strong 27-year-old voice singing opera.

“After a lazy morning, the crew had a slow cruise to Peats Bite Restaurant for lunch, located at Sunny Corner.  The Miljoen’s and their crew were more than helpful and all five boats were moored outside the restaurant.  The place was absolute paradise, as we enjoyed a six course lunch followed by music and dancing.  The lovely owner, Tammy Miljoan, a 70-year-old lady had a fantastic voice and entertained the crew.  Early that evening we had our charity auction for Ovarian Cancer, where all the crew enjoyed spirited bidding, and we raised $1321.  Tammy and her two dogs joined the festivities on board. The “Dummy” moved once again to Mike Bolton, as he had a major personality change from the “Drinking, Twisting Dancer”, to a quiet man sitting next to his lovely wife.

“The next morning there was a buzz in the air as we were finally on our way to Sydney.  We had an easy 20 mile cruise until the sights of Sydney Heads were in our sights.  As per the previous days, we had been blessed with mild winds and dead flat seas.  The skippers certainly had to be on red alert as four navy ships departed the heads at the same time.

“Sunday in Sydney Harbour was amazing, and highlights included a huge Cruise ship anchored, sailing races and large fast boats going in every direction.  Riviera boats certainly controlled the boating in Sydney.  We decided to have a spot of lunch overlooking Balmoral beach, and wait for the bridge to open into Middle Bay.   The boats moored for the evening in Sugar Loaf Bay, where all the crews had a very quiet night.”

The following day the crew arrived in Darling Harbour at Cockle Bay Wharf, with the five Riviera cruisers backing into the marina in to Cockle Bay.  There was a buzz of excitement for the crews and a few bottles of champagne were opened to celebrate their arrival.  Ben Crawley joined the group in Sydney.

“We all had a great time shopping, playing golf, and dining in the lovely restaurants at our doorstep, and visiting friends and family.  It was great to have a few days to relax.  Peter from Indulgence was awarded the “Dummy” for having a spit at the golf course (also, who said Ben Crawley was a terrible golfer, he had a great game).”

On the last day in Sydney; Rod, Julie and Ben delivered fresh Prawns and chilled wine to each boat.  Families departed, provisions restocked, and some boats refuelled at Daisy Wharf ready for the trip north.

The boats departed Sydney Harbour very early, passing Sydney Heads as the sun was rising.  After an early meeting, the crews decided to go to Port Macquarie, as the weather was not looking good and they wanted to get some miles behind them.  A quiet night in Port Macquarie was enjoyed by the group, with a ‘Pot Luck’ dinner and an early night.

The next day the decision was made to skip Coffs Harbour, and head straight for Yamba, so they would only have a short five hour run the following day.  This time it was Rod’s turn to receive the “Dummy”, for informing the boats that it was a port tie up, when it should have been a starboard.  Was it Rod or the Yamba Marina giving the wrong information, anyway the group thought it was good fun.

The following day the boats waited in Yamba watching the weather forecast and at a second meeting the skippers decided it would be fine to depart for Southport.  The journey back was a south east wind, with quite a bit of swell on top.  The five Rivieras made easy work of the non-favourable conditions, crossing the Southport Seaway at 2.30pm.  And what could have been better but a heavy rain fall to wash all the salt away.

It was a fantastic trip, and the group all had a wonderful time.  Rod Crawley, the skipper leading the crew did a fantastic job.  The total trip was about 800 nautical miles.  Riviera Brisbane will certainly be doing the trip again next year, and some of the boats have already booked in for 2013.