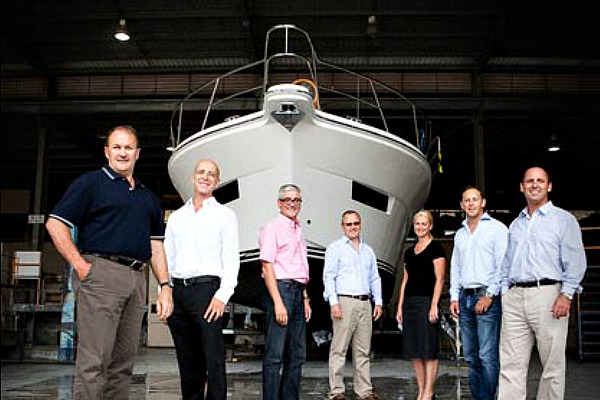 Riviera, Australia’s largest and most awarded luxury boat builder is looking forward to 2013 as its forward orders continue to grow, and the company welcomes three new seasoned professionals to its senior lead team.

The past nine months have been both hectic and productive for Riviera as the company has undergone an extensive re-structuring since the business returned to private ownership in March of this year.

Riviera’s popular and proven current models including the 43 and 53 Flybridges and the 5000 and 5800 Sport Yachts have continued to excite boating enthusiasts around Australia and around the world, resulting in forward orders stretching into mid 2013.

The launch of several key new models in 2012 has been a strong contributor to the growth of the company’s forward order book. These models have included the 63 and 75 Flybridges resulting in six sales, and the release of a whole new range of boats in the SUV series, which has also achieved six sales to date. The acquisition of the Belize Motoryachts line in April has certainly been welcomed by the Riviera global dealer network and has resulted in eight sales.

The announcement of further new models for release in 2013 including the 50 Flybridge and a larger SUV model have further contributed to the forward order bank placing Riviera in a strong position going into the New Year.

As 2012 draws to a close, Riviera is firmly focused on 2013 and the opportunities that lie ahead. To help steer the growing company forward, the lead team has been further strengthened with the appointment of several key personnel.

They will join the highly experienced and skilled lead, which comprises CEO Wes Moxey; long serving International Sales Director Chris McCafferty who is based in Florida, USA; general counsel Cherriee Ludemann; IT, supply and warehouse manager Kirk Starr; and director of brand and communications Stephen Milne.

CEO Wes Moxey said returning to Riviera was a very easy decision for him having watched from the outside how conclusively the Riviera brand retained its integrity and global support during the past four turbulent years..

“For this, I thank Stephen Milne and Chris McCafferty for their unending passion to retain the core values of Riviera against insurmountable odds. This great level of commitment and belief typifies the calibre of our entire new lead team,” said Mr Moxey.

Stephen was the senior designer for Sunseeker for 10 years before relocating to Australia in 2007 to manage and develop the acclaimed Riviera 5800 Sport Yacht.

His love of the Australian culture and outdoors lifestyle gave Stephen the motivation to further his skills in marine design and he seized the chance in 2011 to work on the Belize Motoryacht project with Wes Moxey before returning to Riviera earlier this month to take up the role of head of design.

Stephen said he felt honoured to be leading such a talented and well-respected design team.

“During my career with Sunseeker, I was mentored by design director John Braithwaite and naval architect Ewen Foster and the knowledge and experience I gained during this time has proven invaluable,” he said.

“Working on the Belize project with Wes Moxey gave me a thorough understanding of all aspects of boat design and I am now honoured to be leading the Riviera design team. I look forward to creating some exciting new designs with Riviera Australia under the new ownership of Rodney Longhurst.

“I have been working towards an opportunity such as this for the past 15 years and I am extremely proud to continue my working relationship with Wes. Our team of talented designers are busy using the latest technology to design the next generation of Riviera boats, which we look forward to releasing in 2013.”

Chief financial officer Richard Appleby is a qualified Chartered Accountant and has worked with KPMG and Coopers & Lybrand before embarking on a career in commerce. He has worked with a diverse range of multi-national and privately held companys in the wholesale, retail, hospitality, technology and manufacturing sectors. When Richard learned the business had been purchased by Rodney Longhurst, he wanted to return to Riviera and Queensland.

“I think one of the real strengths of Riviera in 2012 is the calibre of the senior leadership team. Having worked with several members of the team before, I must say that I really enjoy their professionalism, commitment and passion. This team really wants to make a difference in the boating world by creating and delivering a very unique experience for their boat owners. That excites me and I am proud to be back on the team”.

Scott began his boat building career with Riviera as an apprentice in 1990 and went on to complete his Masters in Business Administration in 2001. During his time at Riviera, Scott worked in various roles within the organisation including, boat building, lamination, stainless steel, engineering, electrical, and new product development.

Scott said he was pleased to be back in Australia and felt honoured to have the opportunity to return to Riviera as general manager.

“Riviera is where I began my career and as Australia’s largest and most respected pleasure boat builder, I feel privileged to be a part of this thriving business,” he said.

“I also have a strong focus on creating a winning team and driving efficient production, so I look forward to the challenges my new position will offer.”

Riviera CEO Wes Moxey said Stephen, Richard and Scott were all strong leaders in their own right and given their international experience, they have the drive and determination to take their teams to an even higher level.

“Stephen, Richard and Scott have each worked for Riviera in the past and therefore have a thorough understanding of our systems, our stringent build standards, our expectations and above all, our integrity,” said Mr Moxey.

“These gentlemen return to Riviera refreshed and inspired with new skills, experience and a great positive attitude. They share an ambition to be successful in their respective fields of expertise and I know this additional skill and experience will immeasurably strengthen our senior team. I look forward to 2013 and Riviera’s continued growth.”

Riviera owner Rodney Longhurst is proud to be surrounded by such a high calibre and motivated team.

“I am excited and grateful to be a part of such a formidable team of people who have each excelled in their respective fields of expertise. With our lead team now in place, their relentless desire for excellence and a growing forward order schedule, our Riviera boat owners can look forward with surety and anticipation of new and innovative boats and fun-filled boating experiences,” said Mr Longhurst.