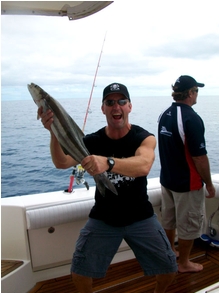 In icy conditions with 120 foot waves, Andy Hillstrand’s crew, in freezing knee deep water, are working against the clock as they smash ice with sledgehammers while the water rises on the bow of the boat.

It is these terrifying conditions that make Andy’s job one of the most dangerous in the world and why the Discovery Channel’s Emmy winning documentary, Deadliest Catch, is a hit.

On a recent trip to Australia, Riviera Experience caught up with Andy by phone from his hotel room in Sydney where he speaks candidly about his chosen profession.

“It’s the most dangerous job and they say in peak season one guy dies a week,” he said.

Andy and his brothers, John and Neal, have had some of the most dangerous adventures fishing for the sought after Opilio Snow Crab, aboard their boat Time Bandit, which they built with their father in 1991.

“We are one of four main boats that go out fishing in the Bering Sea in Alaska and it is one of the world’s deadliest jobs,” he said.

“We just love to do it, I have grown up on boats, my father was a fisherman and my granddad a pro time fisherman, he was in the state legislature.

“You have to really love what you do because it’s a dangerous job. You have to be mentally strong and love an adventure.

“I have seen volcanoes blowing up when I am 12 miles offshore and seeing lava blow out of the mountains.

“But the scariest moment was when the boat iced up back in the 90s, when we were younger and weren’t as wise.

“In these icy conditions the boat usually sinks so we were beating the ice off with a sledgehammer before it sinks. This is when your training kicks in and I actually thought I was going to die but we survived.

Despite the danger, Andy, 45, doesn’t plan to retire any time soon, as he recalls a near miss.

“I had a line wrapped around my hand once and it could have pulled me right over the boat because there was major tension on the line, but it just wasn’t my time to go,” he said.

“Everyday is different and something could happen but if I die doing what I love to do, what could I say?

“However, I hope to be off the deck before 50, but fishing is in my blood.”

Andy and his brothers usually spend about two months at sea during crab season which runs from October to December and between January and March they fish for the Opilio Snow Crab.

While it is hard being away from his wife and two daughters, Andy says it is a small price to pay when he returns home for seven months.

“No one likes to be away from their kids for that long but it allows us to have the life that we have,” he said.

In his spare time Andy enjoys working with horses, which is how he got his nickname, Cowboy.

“John is known as the pirate because he looks like a pirate with his Jack Sparrow goaty,” said Andy.

“Neal is the engineer and quieter than John and I but he is funny, we call him chicken noo noo or Neal the eel because he would catch eels and then cook them.”

Andy recently moved to Arizona after spending 39 years in Alaska. He lives on 20 acres and has five horses.

“I used to barrel race up in Alaska, it was like a rodeo event, mostly girls do it but my daughters got me into it,” he recalls.

“I also like reining horses, which is when we run with the horse and make it do spins, circles, trots and walks – it’s the cowboy version of dressage.”

Andy has been touring Australia promoting Alaskan seafood and the Deadliest Catch.

During his tour, Andy visited Brisbane and Hamilton Island where he spent the day fishing on Riviera owner Peter Teakle’s Riviera 56.

“I have never been to Australia before and I was not disappointed,” he said.

“Hamilton Island is just beautiful and what beautiful boats, Peter Teakle is a very good captain.”

“The weather was great, we left the dock at eight o’clock in the morning and went 30 kilometres out to sea and caught 15 large fish,” he said.

“Andy was fascinated by the boat because he hadn’t been on a 56 Riviera with 3000 horse power in it. He is used to that horse power in a trawler not on a game boat.

“He had a ball, we got him on some nice fish including a 12 kilo Cobia.

“Andy was so impressed with Hamilton Island and the 56 Riviera and the fishing trip, he is coming back with his brother.”

Mr Teakle said the Deadliest Catch was a fascinating show and it was great to meet Andy in person.

“Andy is a modest, entertaining, nice guy. After the trip I went through all the technical information on the boat and Andy was fascinated to hear that I was having a 70 Riviera built so I look forward to taking him fishing on that,” he said.

Andy and his crew will begin filming season six of the Deadliest Catch in October.