Riviera M400 Dolphin 22 is a home away from home 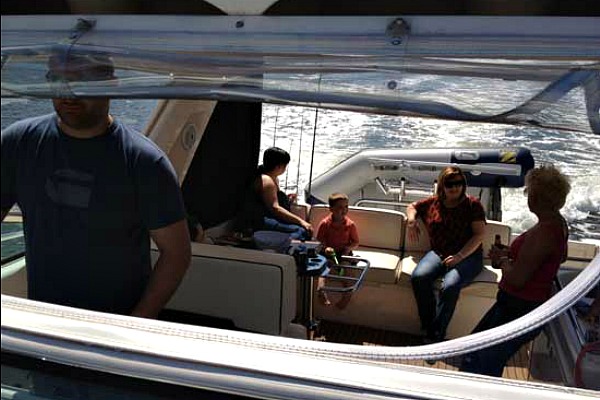 He has spent most of his life under the sea, yet submariner Andy Wilkinson likes nothing more than spending a weekend away with his family on board his Riviera M400, Dolphin 22.

Andy searched for three long years to find the ideal boat for his family.  He attended every major Australian boat show and finally in August 2011, R Marine Sydney found the perfect vessel anchored in Lake Macquarie.

“One of R Marine Sydney’s customers could not find the time for her and one month later she was ours.  Apart from the model suiting our needs, we chose Riviera for the quality.  As a submarine engineer, quality is very important to me and Riviera’s quality is of an extremely high standard,” he said.

“Dolphin 22 is our first Riviera and indeed our first moored boat.  Our daughters are grown up, aged 24 and 18, and we have a grandson by our eldest.  So, the boat had to be able to cope with all Sydney waterways, be big enough to accommodate us all for the odd weekend, provide the boys with a fishing platform, and meet my exacting engineering requirements.  The Riviera name was something we held in high esteem and each one we looked at did not disappoint.

“The boat is our home away from home.  When we are out with the family, we love to swim, fish, sunbathe, and enjoy watching the rest of the family doing the same.  It’s also a real buzz to take friends out for a day.”

When Dolphin 22 is not out exploring the Hawkesbury River and Sydney Harbour, she is moored at Berowra.

“Berowra is so peaceful, even at the marina, and in our first winter, Tracey and I used to head down to the boat on a Friday or Saturday evening and have a meal, a bottle of wine and watch television.  There is also a great restaurant at Berowra, which is open for breakfast, and this is just the perfect spot to sit and read the weekend papers after a night on board.

“Berowra is located on the Hawkesbury and is less than one hour from our favourite anchorages, Peats Bite and Gunyah Beach.  They are so picturesque and easy to get to from the Berowra Marina.  With only one summer under our belts, we are expecting to find many more favourite anchorages in the coming years.”

Andy describes himself as having salt in his veins, arteries, bones and brain – he just loves the ocean.

“If you cut me in half, there would be a picture of an anchor right through the middle,” he said.

Born and bred in the United Kingdom, Andy is a proud Royalist, very patriotic and said that being in the Royal Navy had brought him great pride.

He joined the Royal Navy in 1983, aged 16, as an Artificer (weapons specialist) Apprentice.  He did four months basic training in Plymouth and then two years of technical training at Portsmouth before he saw his first ship for 12 months of sea training.

On completion of his training, Andy was offered the opportunity to volunteer for the submarines and he jumped at the chance.

“As an engineer, this is the ultimate machine and the extra kudos of becoming qualified as a submariner was immense.  It is hard to explain what an extraordinary life being a submariner is and how special that position is,” he said.

“Submariners from all around the world are the same.  There are unwritten rules that submariners follow and mutual respect is global.  It takes a long time and a great deal of effort to qualify as a submariner and you end up knowing every nut and bolt on your submarine.

“Submarine Captains use a special code to communicate with each other and surface ships called ‘The Dolphin Code’.  There are more than one hundred different codes, each with a different meaning, usually humorous.

“Dolphin 22 means ‘Submariners never cheat and rarely lie’.  The emblem of the two dolphins is the submariners badge called ‘Your Dolphins’, which are awarded to submariners when they qualify for the first time.  They are highly regarded across the fleet and are worn with pride.  We named our M400 Dolphin 22 because the name had to have meaning to us and it reflected the 24 years that I had served in the Royal and Royal Australian Navy, most of which was spent as a submariner.”

After seven short years as a submariner, he was made Chief Petty Officer.  Andy served in Northern Ireland, Malaysia, Borneo, Mexico, Guyana and in 2001 he was posted to Afganistan, only days after 9/11.

Not only did Andy serve in some of the most dangerous war zones in the world, but he also encountered quite a few scary moments under the ocean.

“There was a time when we hit the bottom and started to flood, and another time we were mid ocean with five miles of water underneath us and we were diving uncontrollably.  We had passed our safe diving depth by several hundred feet before we arrested the fall and got back to the surface.  There were a few prayers said.  It was the level of training that all onboard had, that saved the submarine and the 150 men on board.

“The challenges are many, not least of which is coping with being out of touch with the world for long periods.  Being a submariner would only be risky if we weren’t trained so well.

“By the time I left my last sea posting in 2004, I had gone from being a technician apprentice to the Weapons Officer who pressed the button to launch nuclear missiles on the command of the prime minister.”

The family relocated to Sydney in 2004 and being new to Australia meant that they spent more time together as a family, and Andy said that boating was definitely a great form of family bonding.

“To me, being on the water is what I do and love.  To be able to share that love with my family and friends is the best feeling in the world.  They get to experience a little bit of what I do for a living in a relaxing atmosphere.

“I do get called Admiral at the local pub and my daughters think I run Dolphin 22 like they are in the Navy, but it’s all taken light heartedly.  I joke with Tracey that she is second mate.

“Two Christmas’s ago, I bought Tracey, both daughters and my son-in-law a boat license course, so each of us is a qualified skipper.  My reasoning is that it makes us all safer and more confident, but Tracey thinks it is so I can handover command and have a beer more often.”

When Andy and his family drop the lines and leave the marina for a day or weekend aboard Dolphin 22, it feels ‘like breaking free from all the hassles of daily life’, describes Andy.

“We have taken her out on the ocean several times, usually to go fishing or down to Sydney Harbour.  The Navy experience does help and gives me confidence.  The M400 does cut through the chop really well, so that keeps the passengers calm,” he said.

“When I took delivery of Dolphin 22, I had arranged to collect her on a Friday morning last September from Lake Macquarie.  I was tied to the time but as the day approached, the forecast kept getting worse and worse.  I decided to drive up to Lake Macquarie and check with the local Coastguard before heading down the coast.

“The forecast was for 25 knot southerly with a three to four metre sell and two metre wave height, all coming from the south.  The most nerve racking part was navigating out of Lake Macquarie through Swansea shallows at low tide in a new boat for the first time because it gets very shallow in places.

“Once out of the lake and safely under the Pacific Highway road bridge, which has to be booked for opening, the Coastguard helped us out across the Swansea Bar by radio and checked with Sydney on the status of the southerly, which was on its way to full strength, so I took a punt knowing my confidence and my crew mate was also a hardened sailor.

“The trip from Swansea Head to the mouth of the Hawkesbury only took about two-and-a-half hours as we pushed the boat onto the plane at about 22 knots and tried to drive through the oncoming swell and weather.  While it was a somewhat damp trip, the M400 was superb and never missed a beat.  I have to admit at being pleased to get into the calmer waters of the Hawkesbury when we eventually got there, but at no time did I feel unsure or lose confidence in the boat’s durability.”

Andy is still in the Naval Reserve and is grateful for the high quality training he received during his career.

“The boat was given a complete re-trim when we took ownership to match her new name and Tracey insisted on the addition of Foxtel to the cockpit and cabins if she was going to spend many more nights aboard – it did the trick.  We are looking forward to another summer of fun around Sydney Harbour and the Hawkesbury River.”