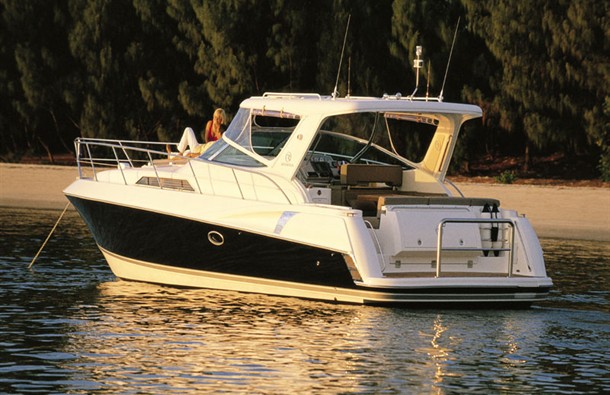 The sleek craft that went past on the Broadwater had a familiar look to it. It looked very much like Riviera’s M400 Sports Cruiser but not quite as big and minus the hard top.

A quick phone call to Randall Jones from Riviera Sports at Coomera solved the mystery. It was the brand-new M360 and although the boat is in the water it is still undergoing Riviera’s extensive R&D program before it is released to the public. And that will be at the Sanctuary Cove International Boat Show in May, where it will appear with a hard top and a few other well thought out refinements.

Seeing the M360 on the water reminded me that even though the M400 is nearly 12 months old and some 16 have already been sold, we have not had a good look at this new breed of Riviera Sports Cruisers. So I took the opportunity to put the 400 through its paces.

The M400 is the first of the range with an entirely new look. It is a brand-new boat with nothing borrowed, except the very solid windscreen, which is found on all other Riviera models. It has a contemporary look, which is very evident below decks. But despite this it is a big volume boat with a big, gutsy profile.

Randall Jones points out that the M400 was not built to a price. The boat was built solidly and to the design team’s specs without cutting corners. Much to the company’s and prospective buyers surprise, they were able to put it on the market under half-a-mil.

The 13′ 7″ (4.13m) beam has been taken well forward to make use of any void space. In fact, there is no void space in the boat, every space that can be used has been. The result is a one level cockpit and helm station with a very large lounge area. There is a foldout dining table, using all the space of the aft section of the cockpit. The table was stainless steel grate inserts and stainless bottle and glass holders in the middle, and the aft lounge would seat about five people comfortably.

A large sink and bench top is located test Riviera M400 here as well with fridge and icemaker as standard. Another little feature is the space under the helm seat to take an icebox that can be used to transport the goodies from home to the boat. Instead of leaving it in the middle of the cockpit for everyone to fall over, it can be stored under the seat out of the way. The view from the helm station, even when sitting down, is exceptional for a sports boat with a hard top, which, incidentally, is lined. The dash is also large with the instruments set in two stepped consoles that provide shelves to toss a phone or a wallet safely.

The test boat was powered by twin, big-block, 8.1lt, 375hp, MerCruisers with Bravo III legs. Volvo Penta D6 diesels and legs are an option, but add about another 60 grand to the overall price. It depends on whether you want petrol or diesel engines.  Using the MerCuisers has allowed Riviera to fit Mercury’s innovative Smartcraft engine monitoring system and electronic controls that must rate as some of the best in the business.

On the water the M400 has no vices, it can loiter as docile as you wish or if you want the occasional squirt of power for a bit of exhilaration, it will do that too. In the test boat, which was hull number one, the engine revs peaked at 4600 and the GPS read 33.6 knots. With a little tweaking of the trim we may have been able to coax 5000rpm and a speed of 36 knots out of it. But at that speed you would not want to know the fuel consumption.

Research has shown that not many people run their boats, not even runabouts, flat out all the time and most owners are happy sitting on a comfortable cruising speed, so the sports boats are designed for a good cruising speed and the ability to have a bit of fun.

Weighing-in at a dry weight of 7,900kg, depending on the engine configuration, it is a relatively heavy boat and needs a handful of throttle to get it moving. Even so it planes at 14 to 15 knots and a comfortable cruising speed of 20 knots at 3300rpm. We recorded 19.7 knots on the GPS.

The Smartcraft fuel metre showed a flow of 142lt per hour, remembering that the flow metre reads about 25 per cent on the high side as it doesn’t show the unused fuel that is returned to the tanks.

Down below the design team has excelled itself with a styling that is unique to Riviera and certainly not seen on any other craft of this size.

The forward cabin can be opened up with two sliding doors that feature opaque glass inserts. The lockers have also been given the same treatment. Bearing in mind that all the entertaining will be done in the cockpit, the designers have used some of the space to enlarge the bathroom with a large shower and a curved screen which turns with you as you step in.

The galley bench top is finished in a granite look and some innovation has been employed to use space with the design of the drawers and cupboards. The wooden louvres over the windows are also different; they can be opened to let a lot of light in or easily closed up. Use has also been made of semigloss beechwood in the cabin, which helps to give it a light airy feel. Instead of teak or carpet, Amtico, a synthetic and very durable wood-look finish, has been used on the floor in the main cabin.

I almost forgot the second cabin under the cockpit. Under here is a single berth fore and aft and a double-berth across the beam and standing room at the entrance and a lined hanging locker.

There are many new design features built into the M400 that are not readily evident and Riviera has certainly set high standards in the sports cruiser market.

The M360 should come on the market at around $350,000 and judging by its big brother, it will be worth waiting for.

About Riviera
Riviera began operations in 1980, at Terry Hills a leafy Sydney suburb. The first boat to carry the now famous brand was the 38 Mark I Flybridge Cruiser.

Within a year the company moved to Queensland and with a staff of only five people, built eight boats in 12 months. In 1983, the company exported its first boat to the US.

Then, two years later Riviera exported its first boat to Europe. Today, Riviera employs more than 1200 people in the largest luxury boat-building complex in the Southern Hemisphere at Coomera, on the Queensland Gold Coast.

The company now builds more than 450 boats a year and exports to 30 countries around the world.