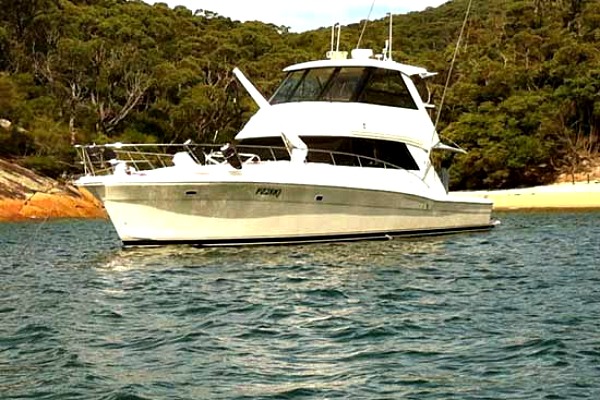 Melbourne, Victoria, Australia: Speaking from his waterfront home in Melbourne, Captain Barry Cuneo has a couple of hours to spare before he guides a ship into Port Phillip, where he works for one of the oldest Sea Pilot authorities in Australia.

Port Phillip Sea Pilot was established in 1839 and provides pilotage services to the ports of Geelong, Melbourne and Western Port, 24 hours a day, 365 days a year.

Born in Queensland, Barry comes from a family of experienced and champion sailors.  His father, Tom, was an Australian champion and his uncle, John, was the first Queenslander to win a gold medal for Olympic Yachting at the 1972 Olympics, so for Barry it was a natural progression to go to sea.

In 1980, Barry joined the Merchant Navy where he progressed through the ranks from officer and was promoted to captain in 1992.

Throughout his career, Barry has travelled the world and captained some of the world’s largest tankers, including the French oil tanker, New Wisdom, owned by Total, which was some 340 metres long with a draught of 22 metres.

It was an exciting, challenging, dangerous and at times lonely career, which would often take Barry away from his wife, Carey, and two children Thomas and Gretel for up to five months at a time.

For Barry, his biggest fear while at sea was a medical emergency.

“When you are responsible for 20 people and you are 15 to 20 days across the ocean, my biggest fear was when someone got sick, hurt or critically ill.  I had to handle some medical emergencies and there were times when I was doing it with a radio medical.  It was times such as this that would be very daunting,” Barry said.

“I would go out on a stretch of five months on board where I never stepped ashore and it can be very lonely at sea, especially when there are multiple cultures on board.”

There were also many dangers when out at sea and although Barry said he was never afraid of pirates, he said they were a real threat, especially around the Somali Coast.

“There were a few curly times with pirates but we would take precautions when going through pirate infested waters, such as turning on the fire hoses on the deck which makes it difficult to climb on board.  We would also keep our speed up and put dummies on the deck so it looks like there are people on board the boat.

“The pirates are well documented and everyone has contingency plans in place.”

Despite the loneliness and dangers of his job, Barry said it was a very satisfying and rewarding experience.

In 2003, Barry and his family returned to Australia when he became Sea Pilot for Port Phillip Sea Pilots and in 2007 they bought their first Riviera, a 48 foot Flybridge called Whirlpool.

“We were on the Gold Coast holidaying on my mum and dad’s boat when we rocked up to Marina Mirage in our tinnie and saw Whirlpool, and we just fell in love with it,” Barry said.

“Both my wife and I have grown up around the Bay (Moreton Bay) on power boats but I have always wanted yachts.

“I bought the Riv because that was the boat my family wanted.  We brought her down to Melbourne and did a voyage around the Bass Strait.

“The boat was set up really well for long distance voyages.

“Last year we took her north from Melbourne to the Gold Coast, stopping at Burmagui and Port Stephens along the way.

“We eventually ended up in the Whitsundays where we kept the boat for a couple of months before taking her to Port Douglas and now she is in Yorkeys Knob, which is located between Port Douglas and Cairns.

“The boat was sensational in some seriously bad weather.  On one occasion we anchored 75 km offshore from Townsville in Dingo Reef where there were 30 knot winds with no land in sight just the reef.”

Barry said they fly to Cairns most weekends to spend time onboard cruising around the tropical north Queensland waters.

“Rivieras are designed to be up there for the game fishing which is really good in Cairns,” he said.

Barry said it helps to have an experienced crew on board and to be able to understand the weather.

“We did a trip around King Island in Bass Strait and we had three Master Class One skippers on board and it makes a huge difference.  Master Class One means that you can be captain on any ship around the world.”

“We have had some great holidays together.  Rivieras are very clever boats because they are family orientated and well designed.  They really do gear the boats towards the women very well.”

Barry, 49, has been sea going since he left school in 1979 and after all his experience at sea and captaining enormous tankers, he has settled on a 48 foot Riviera for his family’s leisure boating.

Our plan to leave Monday the 11th fell apart. An approaching front was promising closed conditions for a week. I was watching well ahead, where strong N’Elies had persisted east of the Prom for a week, so a slim window had opened. We departed at 8.5 knots, as we had to wait for the easterlies ahead to clear, but at the same time, staying ahead of the approaching frontal system.

After scribing the year 2011 on our name board ashore, we caught the largest King George Whiting I have ever seen. The photo proves it’s 50cm length. We caught a total of four, which fed the crew of four! We had some fantastic Tuna action approaching the Prom.

It was a careful calculation when to depart Refuge, as well ahead, the NElies were still prevailing, hence producing uncomfortable sea conditions. We were waiting for the South Westerlies to catch us. We had lunch and a short sleep, ready to slow steam across the Strait, awaiting the Southerly change.

We had an easy evening, Trolling until dark, from where we broke into two watches for the night. The southerly hit us around 2200 – later than expected, which concerned me, as we were too early for the easterlies to subside at Gabo.

My concerns were realized, as the residual Easterly swell was confusing the building South westerly swell, causing dangerous, short peaks and troughs. As the boat was very heavy – fuel, water, supplies (and beer), she was not handling well at slow speeds. She was bow heavy, so I transferred 1000L of fuel from forward to aft. This completely changed the handling. She stuck her bum in deep, and lifted the bow. All was fine by dawn, and a valuable trim lesson was learned.

Distance, 410nm, 1958L, average of 4.77L/NM, including generator, average speed 10.79kts. Bermagui remembered the boat when Jeff Malley, the previous owner used to take her there. They were so helpful and it was a really enjoyable experience.

This was a dream run – fully planned to have this stretch, with light offshore breezes. We first planned to stop at Sydney, to change crew and pick up my wife and daughter, Carey and Gretel. ALAS! The southerly buster was threatening if we stopped, so we kept steaming – at a very rational trolling pace, with burst of speed at times to clear the turbos. The weather was perfect, and we rock hopped along the shore all the way to Port Stephens, to avoid the southerly set. We did not experience more than 10 kts of breeze the entire way.

Distance, 300nm (plus some fishing distance) average of 3.7L/nm, average 9.68kts. I really wish we had not had stayed at Port Stephens. To pay $1.92 for fuel (more than 20c more than anywhere else, plus $95 to stay on the fuel Jetty, really soured the experience. Some will disagree, but the unrealistic expense did not encourage us to stay.

We could feel the start of the warmer weather. Lines were trolled, and by Sugarloaf, we were “almost” tired of stopping for the next call of “FISH ON”. The tuna were running hard, so the trip was paying dividends, but the average speed was dropping. It didn’t matter.

Distance 310nm, average of 4.2L/nm, average 10Kts.
This is where the Queenslander in me kicked in. I had spent my whole life until ten years ago in Moreton Bay from a small child, as had my 19yo son, Tom, who was with me on the trip. We immediately put the dinghy in the water, and sent Tom and George over to the tackle shop at Southport to get some crab pots and bait. So, after a good 32 hours at sea, we didn’t touch land – we went straight to Dux to set the pots in a secret spot – to show the Victorians onboard what Moreton Bay is really like. The next morning produced 4 very sore heads, three mudcrabs and one crushed sandy.

We then took the boat to Hope Island Marina. From there, George and Scott flew back to Melbourne – looking very forlorn. Carey and Gretel joined Tom and me for some well earned family time down the Bay. Carey grew up on her family’s Alfie Pryor built, 38ft Bay Cruiser “Werona”. They spent most of their time at the Little Ship Club at The One Mile, or at Dux. For me, I grew up on my family’s Fleming built 37footer “Antares” – moored at The Bedroom at the times other than attending sailing regattas around the country. It is ironic that my future wife and I never met as kids – it shows that it was a parochial bunch down the Bay in those years – each anchorage’s inhabitants kept to themselves – even if you were only a short walk away.

Easter approached, which called me away for the Brisbane to Gladstone Yacht Race, whilst the family went back down the Bay without me. It shows the importance of ensuring others in your family are competent to handle your boat. Tom, our son, was skippering Antares from a small boy. He sailed, rowed and generally has been about boats since in his nappies. Many have commented on his competence driving Whirlpool.

Handling a Riv is not difficult. Handling any vessel is mostly common sense, practice – and leaving one’s ego ashore. Tom learned without a bow thruster and a single screw, on a vessel 13 tonnes, with only 120hp. It is the best way (in addition to having a good sailing background). Without that, it is a simple case of getting good tuition – take it slow and carefully and if in doubt – stop the boat  and start again. Gretel, our 15yo Daughter, also learned from an early age, and is competent (and licensed).

After the very slow Gladstone Race, aboard the Farr 40 OD Lambourdini (yes we beat the other ones!) it was time for some more days down the Bay with the family, before preparation for the refit at the Riviera Aftermarket facility at the factory in Coomera – the next extremely satisfying and enjoyable experience of the expedition North.