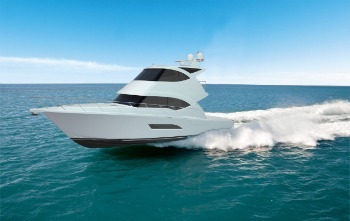 The 53 Enclosed Flybridge is a new generation of luxury, technology and personal customisation and Riviera has already received 12 orders ‘off the plan’ from enthusiasts in Australia and the US.

Designed from the keel up using Riviera’s Uni-Graphics NX three dimensional CAD software system, the new 53 has been developed in-house by the Riviera design team after nearly two years of detailed consultation with boat owners across the globe.

“The 53 combines contemporary thinking with traditional elements. There is a lot of boat for its length.”

The new 53 has three cabins and two bathrooms and is the first Riviera flybridge in the 50 foot range to offer a full-beam master stateroom, with king-size bed and large ensuite.  Port and starboard alarmed opening port holes bring light and fresh air below.

The 53 is the first Riviera in this size bracket to offer an enclosed flybridge with spacious seating for a party of 10. Flybridge access is via an internal staircase. The 53 is also the first Riviera to offer the flexibility of choice with a range of different pod drive and engine plant configurations. This new model has been entirely designed around these proven and efficient drives.

The new 61 series II with a raft of ground breaking engineering and design enhancements is a luxurious long range and highly capable offshore vessel, which is available in either enclosed or open configuration and has taken many popular design cues from the fleet’s prestigious flagship, the Riviera 70.

Riviera has already taken four forward orders of the new 61, which comes in either a three or four cabin option.

In the master suite a queen sized bed aligned fore and aft now takes advantage of the large port lights, while a host of cleverly engineered features make storage of luggage and clothing easy.

Comprising fixed laminated safety glass and opening portholes handcrafted from stainless steel and wired to the boat’s ignition alarm system, the newly designed hull windows bring a flood of light and fresh air into the main cabin to port and into one of two guest cabins to starboard, depending upon which option is chosen by the owner. The 61 Series II features three bathrooms with the starboard day head also benefiting from this fixed port light.

The 61 Series II features a galley positioned aft and adjacent to the saloon.  The galley is equipped with European appliances and is separated from the large sociable cockpit by a hinged awning window and a large tinted glass door which when opened brings the outside in.

The cockpit is an extension of the live-aboard space inside and doubles as an optional alfresco mezzanine dining area with table and fore and aft facing seating.

Overlooking the cockpit is the spacious enclosed flybridge, featuring forward helm and aft docking station.  The open flybridge option features an aft helm with a U-shaped lounge around a convertible table with a settee opposite.

The enclosed flybridge features a hinged awning window and glass door that bolt open to bring outdoors in and unify the space.  Wrap around seating to port features folding arm rests with functional storage underneath and a drop down dinette table.  This is a truly luxurious sky lounge.

To starboard there is a wet bar with bottle and glass storage. A 26 inch flatscreen TV is wall mounted above the wet bar.  A draw fridge is located under the base of the pedestal – mounted crew seat to starboard which fronts the forward dash.

The upholstered wrap around forward helm can accommodate up to three 12 inch displays.  Air-conditioning ducts can be vented against the windscreen to demist the glass in humid conditions. Opening side windows feature positive seals and deep drainage slots.  Night-time privacy can be assured with retractable venetian blinds. And throughout the 61 energy saving LED lighting illuminates this social space with a warm ambiance.

“We have sold 25 new 43s since the launch last year, which is a significant achievement,” Mr Milne said.

“This year Riviera is launching the new 61 Series II and we already have four orders which are under construction so we expect this model will excite the market.”

As one of the shows founding exhibitors, Riviera enjoys a 23 year history at Sanctuary Cove and will be in their familiar location at the beginning of F Marina.

Mr Milne said Riviera was proud to host the world launch of the 53 and 61 Series II Flybridge at one of Australia’s premier boat shows.

“We have received a lot of interest in this new model and have several potential buyers travelling from overseas and interstate to view the 53 and 61 Series II at the show followed by a sea trial immediately after the show.”

Riviera will be among 400 exhibitors at this year’s Sanctuary Cove International Boat Show which will be held from May 20-23 and draws more than 40,000 boating enthusiasts from Australia, India, Taiwan, China, Korea, United Arab Emirates, Italy, Malaysia, Singapore, the UK, the US, New Zealand, Spain and the Philippines.