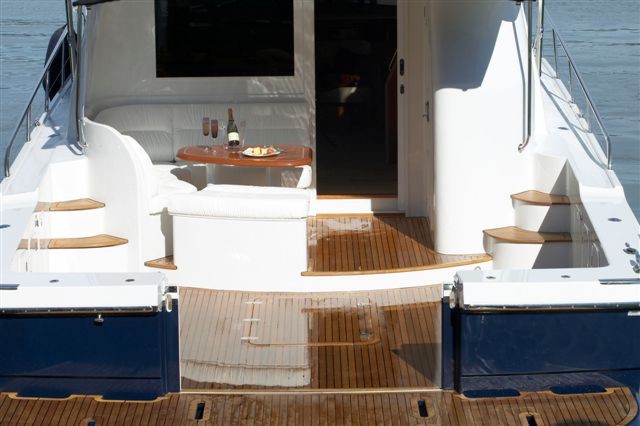 There has always been and always will be a friendly rivalry between Australians and New Zealanders. Whether it’s beating each other at football, cracking the odd sheep joke, or reminding Kiwis that “fush and chups” is actually pronounced “fish and chips”. Some New Zealanders may disagree, but besides standing side by side in times of conflict, we have a lot in common.

Kiwis and Aussies have the same dry sense of humour, we love a cold beer and a barbecue, even if the Kiwis prefer to cook their meat under the ground (hangi)  and a glass of good red is always on the cards. But like Aussies, Kiwis also know how to build good boats.

Readers may not realise it, but per capita of population there are more boat builders in New Zealand than in any other country in the world. And they produce an excellent product. Salthouse Marine is a true Kiwi success story and has now been around for more than 50 years. But while they only build around six boats a year, the quality of their product is second to none. Salthouse boats can be described as semi-production vessels, because of their flexibility of design. A new owner can almost start with the bare hull and configure it as they wish, obviously within the constraints of structural integrity and bulkhead placement.

Customising the fit-out adds to the enjoyment of buying a Salthouse and why one Salthouse can cost a lot more, or less, than a similar Salthouse. On this occasion the boat in question Independence topped the $2 million mark, which sounds a lot, but when you consider the extras fitted to her and the quality of the build, the price is quite reasonable.

A dining table that retracts into the floor under its own steam and an enormous, also retractable, flat plasma TV screen are just two of the little extras you’ll find onboard Independence, not to mention the Waterford crystal lamp that adorns the shelf behind the windscreen in the main saloon.

There were certainly no short cuts taken putting this boat together, the quality of the workmanship and fixtures and fittings are all five-star. But Salthouse has never been a company to do things by halves. Take the hull and superstructure for example, (Lloyds Certified) they have been finished with two part epoxy and the result is dazzling.

At 57 feet, Independence is a fair lump of a boat, but her new sweeping lines and lower profile make her an extremely attractive vessel. She also has an extremely roomy flybridge, which posed a challenge for the designers. Because the helm is set at the front of the flybridge the skipper couldn’t see the stern of the boat when docking, or backing the vessel down. The answer was simple, place a small helm and engine controls on the rear bulkhead of the flybridge.

That was easy enough to solve, but hang on, the new owner reckons that would spoil the lines of the boat, go to Plan B. And Plan B turned out to be one of the niftiest design innovations the team has seen in quite a while. On the starboard side of the flybridge’s rear wall is a small locker. Pull this open and out slides a set of engine controls and the bow thruster joystick. Out of sight out of mind, but always at hand. The skipper can stand on the rear veranda, see the whole starboard side and swim platform and easily control the boat when manoeuvring around the marina.

The test boat was powered by twin 700hp C12 Caterpillar diesels with electronic Twin Disc Quick Shift engine controls, which made controlling the boat a silky smooth affair. Weighing-in at 24,000kg fully fuelled and loaded, she’s able to cruise at 26 knots pulling only 1950rpm, and burns only 150lt per hour for both motors. Knock the speed back to 16 knots and she’ll run all day burning only 100lt per hour. That’s quite economical for a 57- footer with such big motors. Not only was the boat relatively economical to run she was also one of the quietest vessels the Modern Boating team has been on.

Anywhere in the boat we were able to conduct a normal conversation without the need to raise our voices to be heard above the engines. Obviously the engine room was well insulated, but underwater exhausts also help eliminate most engine noise and fumes. Underway the hull responded extremely well to the helm, turning easily and tracking straight, even in a following sea. The 57 retains a sharp bow entry and has a warped planing hull that flattens out quickly towards the stern, which aids stability at rest and when underway.

She planes at 11.5 knots and has a planing angle of three degrees. Powering out of Botany Bay, there were rolling 2m swells coming in through the heads that we attacked head on. At no time was the boat’s progress diminished, nor did she pitch or roll excessively. The props are set for maximum bite on the water and this also aids stability, tracking and surefooted turning. With the sea at our backs the conditions were negated and the boat tracked true, showing no tendency to broach.

Sounds like a trip around the Whitsundays could be in order. The new owner has the latest Raymarine electronics package fitted to his Salthouse including telephone and Internet access. In fact, the main helm station looks more like the bridge of a 747 than a boat. He intends to live onboard for five months of the year in the Whitsundays, but still needs to be able to watch over his retail outlets in the Northern Territory.

He’ll have his own floating office, and an extremely luxurious one at that. Now, for a quick tour. The aft cockpit is wide open and large with a huge airtight and pneumatic sealed, waterproof lazarette, so you don’t have to worry about gear stored in the aft cockpit getting wet anymore. There are two lightweight sliding transom doors and a large, full width teak swim platform.

The walls of the cockpit are filled with lockers for storage, BBQ gas bayonet connection, deck wash and the likes and there’s a U-shaped lounge around a stylish wooden table and a larger chest refrigerator. To starboard there’s a toilet with a shower, sink and vanity unit. The rear saloon door slides away revealing a fully equipped U-shaped galley is to port. The rear window of the galley is another handy extra; it is an electrically operated glass partition that opens at the touch of a button so that food and drink can be passed from the galley to the rear cockpit. The saloon is open plan with its centrepiece being the retractable 42″ plasma TV. As I stated earlier the main dining table also retracts into the floor leaving only the large U-shaped lounge visible.

This also converts into a double bed. Bar, sound system, DVD, subtle lighting, this cabin has all the appointments and trappings of a five-star hotel. Downstairs there are two equally luxurious staterooms serviced by the one toilet and shower. Both have ample storage and hanging lockers and feature beautiful teak joinery and panelling. This boat is fully air-conditioned, another extra, but in my opinion an open window is the best air-conditioning on any vessel.

Internal stairs lead up to the flybridge where, as I stated earlier, the helm station is similar to that in a 747 jet, with every conceivable electronic device to aid navigation and boat handling fitted. GPS, radar, auto pilot, bow thruster, sounder, engine management system, VHF radio, forward looking probe to spot floating containers and whales forward of the boat and docking station, computer monitor for laptop, engine room TV monitor and the list goes on and on.

From the fully adjustable helm seat the skipper has an uninterrupted view to all points. An L shaped lounge at the rear of the flybridge seats around six people, so the skipper can still enjoy the company of family and friends while underway. The lounge also converts to a queensized double bed. Because the new owner intends to live onboard for long periods at a time, the boat was fitted with a 17kva generator and a 3000- watt inverter with 100amp charger, which should keep plenty of sting in the batteries.

Out on the bow sits the Aquapro tender, an RFD life raft, a Davco davit and the other pieces of equipment that make like at sea easier, such as a Muir anchor winch and a stylish 45kg Manson stainless steel anchor. In summation, the gleaming white hull, reworked windows, sleek lines and a new low profile design make this new Salthouse really stand out from previously built models.

Independence is powerful, luxurious and has all the trappings to make living onboard enjoyable. She’s not a cheap boat by any means, but the good exchange rate between the Australia and New Zealand dollar means you get a lot for around $2 million.