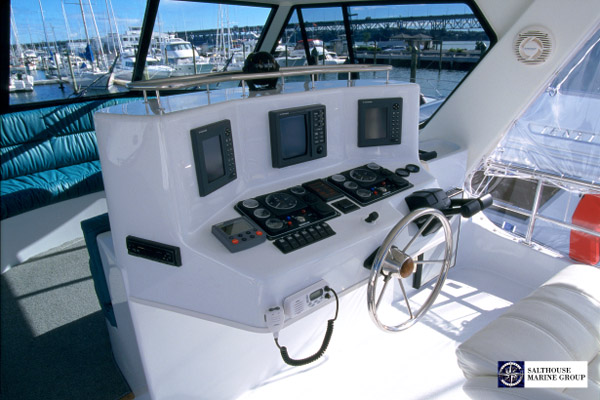 Boat tests and weather are two of the more unpredictable constants of a boating journo’s life, especially during a Sydney summer. It’s often said that if you want hot dry summers, go to Melbourne or Adelaide. Here at the Modern Boating base in Sydney, the summers are normally humid, overcast and wet, definitely not conducive with snapping off a few good boat pics. So in NSW our only saving grace is our winters. These are normally crisp, dry and sunny, or they should be.

You are probably thinking to yourself what’s he rambling on about ? Well, we’ve had this test of the Salthouse Sovereign 55 and the cover shoot on the backburner for months. The weather’s been perfect to date, but now, just when we were finally ready to go, we may have cracked it for the crisp and dry, but there’s a 5m swell running in Sydney Harbour rising to a good 8m outside. Our plan to run the 60 foot camera boat down to Port Hacking for the photo shoot was literally blown off the water.

After a couple of quick phone calls “Plan B” sprung into action. The test boat was already moored at Port Hacking, so all we needed was another camera boat, albeit a smaller one. The boat test itself would have to be postponed, but because the cover shot on this occasion called for a stationary boat, we were still in with chance. Let’s do it.

After loading life’s little necessities onboard, a healthy supply of Penfold’s reds and whites and the obligatory cold Crownies. Frank, the proud new owner of this Sovereign 55, motored down Gunnamatta Bay and out through the channel into Port Hacking proper.

But even here huge swells were rolling through the mouth. The only ones enjoying the conditions were the surfers off Cabbage Tree Point, where the waves had taken on Hawaiian Pipeline proportions as they crashed onto the Port Hacking sandbars.

We should have realised the best-laid plans of mice and men go asunder. The plan to lay off Jibbon Beach was also shot top pieces, because the howling southerly blasting across the treetops made it difficult to hold bottom let alone trying to bag a lifestyle cover shot of people enjoying an onboard party.

The only option left open to us was to head back from whence we’d come. It was a case of shoot the cover in the sheltered waters of Gunnamatta Bay, or forget it. For those of us in the smaller camera boat – a 23′ Boston Whaler centre console – the trip back across Port Hacking was spectacular to say the least.

I would have taken some excellent shots of the Salthouse 55 revelling in the rough condition, but I was having trouble staying on my feet. Plus the spray blowing across the bow at more than 40 knots meant I’d need a diving case to keep my camera dry. So I took the opportunity to watch the 55’s hull perform in the atrocious conditions.

I am not kidding when I say the swells coming into Port Hacking were 5m plus. And it took some agile boat handling by Salthouse’s Kyle Barnes to the keep the smaller camera boat from being swamped by one of the big swells. But not too surprisingly, knowing the Boston Whaler’s almost legendary rough water performance, the smaller boat also handled the big seas well. You just had to hang on.

But back onboard the big Salthouse, apart from a couple of green faces, it was a different story. Crossing Port Hacking to pick up the narrow channel that leads back inside, the waves were hitting the hull broadside. And yes, the boat rolled slightly as any hull would with tonnes of water rolling underneath her keel, but she recovered quickly and continued to track straight.

Turning into the channel the large following sea caused the hull to surf slightly, but again she tracked straight without any hint of broaching. I was looking forward to getting behind the wheel of this big Kiwi. But that would have to wait. Time was getting away from us and the cover shot was the main priority of the day.

As it turned out Gunnamatta Bay provided the perfect backdrop, so with the cover shot in the can, new plans were made to return to Port Hacking to complete the boat test.

And would you believe it, Murphy’s Law struck again, only this time it went completely the other way, clear blue skies, not a breath of wind and seas as flat as a dunny-carter’s hat. It was so calm you could have taken a ski boat out to the Continental Shelf.

This time the conditions were basically too good for a boat test. Even a bathtub could handle this, but it was a lovely day to be at sea just the same. At least the performance figures would be constant.

Talking to the boat’s owner Frank it became obvious he was passionate about his vessel and knew her inside and out. The team’s GPS quickly confirmed the speed to rpm results Frank had quoted. 10 knots at 1000rpm; 15.8 knots at 1500rpm; and 23.4 knot at 2000rpm.

The boat cruises comfortably at 26 knots pulling 2100rpm, but according to Frank 22 knots at 1950rpm returns the optimum ride and fuel efficiency. At WOT the Salthouse hit 30 knots pulling 2300prm.

But it’s not only performance and handling that gave this Salthouse a tick in the box. The standard of fit-out and finish is first class, but it’s the clever use of available space and the customising options open to owners that gives each Salthouse its own individuality. The Salthouse Sovereign 55 has an LOA of 57′ 4″, a beam of 16′ 4″, draws 4′, displaces 18 tonnes and sleeps seven.

There is a double island bed in the master stateroom, a double with a single bunk above it in the guest’s suite and two single bunks in the third cabin. Plus, the lounge in the saloon also converts into a double bed, which means this boat can sleep nine if required.

At this point we normally take a guided tour of each boat we test, but I think readers would be better served if we point out the customising that make this boat stand out from others in her class. Yes, she’s luxurious with all the comforts, as the accompanying photographs show, but she also has many subtle improvements.

The first is her timber trim. This Salthouse is finished in a darker jarrah finish, as opposed to the standard cherrywood. Why ? Because Frank and his wife Monica have two boys, who give their names to the boat Glenrick, and this is a family boat that gets used and used a lot. By finishing the boat in jarrah a darker pile carpet could be fitted, which doesn’t show dirt or stains as the normal beige carpet would. It makes good sense really.

Frank reckons that on a boat you only need a comfortable bed to sleep in and not an open-plan master suite that saps usable space from the rest of the boat. So he’s also done a bit of customising below decks.

This makes the cabins slightly smaller, but allows for changes like a full-sized shower cubicle to be fitted in the main bathroom. The team agree with Frank’s sentiments on space, but the trade off is you lose hanging lockers in the cabins – we can live with that.

But the customising doesn’t stop in the cabins. Throughout the boat are many subtle changes that may not sound like much, but they make a hell of a difference when living onboard. Changes like removing the swing out door on the bar cabinet and replacing it with a concertina type that doesn’t encroach into the saloon.

The Sovereign’s aft cockpit is enormous and Frank has also been busy here. He’s had a large freezer installed under the step behind the saloon bulkhead.

Then there’s the swim platform, which is part of the hull not an add-on. Further customising could have been done during construction, such as moving the transom and the saloon bulkhead back another 3′. It means more room in the saloon without the loss of cockpit space.

But the flybridge is the piece de resistance on this Salthouse. It features a huge D-shaped lounge forward of the helm – it’s big enough to seat more than 10 people under the skipper’s watchful gaze – a folding coffee table, and a state-of-the-art electronics package for the skipper. GPS/chartplotter, colour sounder, radar, autopilot, bow thruster, the lot, there’s even a wind-speed indicator.

The only option Frank left off, but now wishes he hadn’t, was a water desaliniser. It seems 1400lt of freshwater doesn’t go that far when there are nine people onboard for an extended stay.

But there’s more to this boat than first meets the eye. Under the skin she’s constructed from end-core balsa sheathed each side with fibreglass. The outer sheathing includes three layers of Vinylester to stop osmosis. The hull and decks are also built to Lloyd’s standards, making them adaptable to any other survey requirements anywhere in the world.

How much does she cost ? Well, you’ll need around $1.5 million to buy a Salthouse 55. The Kiwis are renowned for the quality of the motoryachts they now build and it’s a little known fact, here anyway, that New Zealand has a bigger slice of the world motoryacht market than Australia.

Don’t get me wrong, I am not having a go at Aussie built boats, but these vessels are also built tough, with the luxury finish and design features to keep them world class. For further information contact Salthouse Marine Group Australia on 1300 720 076 or visit their website at www.salthousemarine.com

She has a fuel capacity of 3000lt giving the boat a cruising range of around 500nm.Engine controls are electronic Twin Disks, which ensure smooth, controlled response from both gearboxes and engines. Twin 450hp diesels are a power option.