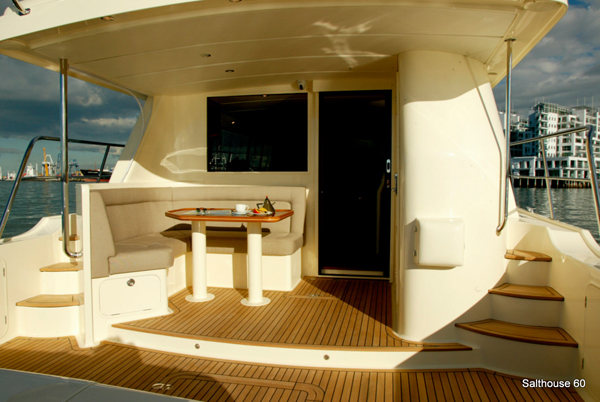 Look at the home port painted on her transom and you see Madame Rouge is destined for Port Douglas in far north Queensland. Her new Victorian-based owners intend to fly there every few weeks to enjoy time aboard. And with the entire northern end of the Great Barrier Reef on their doorstep that’s a boating dream we’d all like to share.

But only a few people will ever enjoy the reef in the style Madam Rouge bestows upon those fortunate enough to be onboard. What a great way to view one of the true wonders of the world.

The good news for the rest of us is that Madam Rouge will be available for (albeit a limited number of) exclusive charters, whenever her owners aren’t onboard. Offering five to six star accommodation on any part of the reef your heart desires – not exactly roughing it. It’s a dream that could become reality for a lucky few in the near future.

The Modern Boating team ran into the 60 foot Madam Rouge at the Sanctuary Cove Boat Show, during an uncharacteristic cold snap that was highlighted by cold temperatures, chilling rain and gale force winds. We couldn’t get onboard Madam Rouge for a close look during the show such was the interest she attracted. But a couple of days later, in still wet and chilly conditions, we took our chance.

Marina Mirage isn’t the kind of place where too many boats stand out from the crowd. And you’d soon run out of fingers and toes trying to count the millions invested in classy boats as you look around. But berthed next to a pair of smaller Salthouses, Madam Rouge does stand out. In a world of glaring white gelcoat and gleaming stainless steel the distinctive red stripe decorating her flybridge says “I’m here”.

Salthouse Marine’s Kyle Barnes welcomes the Modern Boating team onboard and introduces us to James Stevens, Madam Rouge’s professional skipper. Leaving our shoes to their own devices out in the impeccably handlaid teak cockpit we enter the saloon.

Outside the last few days’ gale warnings have been lowered to a mere strong wind warning. Every mast’s stay in the marina was tinging and tanging. We were thinking it’s not a very nice day, that’s until the aft saloon door closes with a muted “thunk” and a hush descends on the gathering.

If there’s one constant about Sanctuary Cove’s annual bash it’s that after four days here your brain gets a bit overloaded in the sumptuous, luxurious and the opulent. But inside Madam Rouge the team still express a collective wow!

Opulence is only one side of Madam Rouge’s persona, because she’s also an entirely practical and comfortable long-range cruiser – you could describe her as a mini super motoryacht.

In Kyle and James’ amiable company we move about the boat yarning away as only people who share a common love of all things boating can. Inevitably, without a solitary Kiwi joke being told, the matter of Salthouse boats being built in New Zealand comes up.

Apparently our national habit of bagging all things from the Land of the Long White Cloud has been pretty thick on the ground at Sanctuary Cove. So Kyle is happy to point out just how happy Aussie Salthouse owners are with their boats in the warmer climate on this side of the Tasman.

“Warmer mate, while we’re cosily chatting away the weather outside is bordering on bloody awful, the boat has already made that point for you.”

The 24,000 BTUs of Ocean Air air-conditioning is dictating the climate inside the boat – including the flybridge – which is controlled at the flick of a switch. It’s a shame we can’t just flick the switch on the weather outside.

Opening a draw I stumble across seven remotes. “What are these all for?” With a cheeky grin James pops a few buttons on various remotes and on comes the surround sound system, the flat-screen TV, the DVD and the blinds go up and down. But there is still a couple of remotes laying untouched in the drawer.

“What do they do?” “Buggered if I know, I’ve only been onboard a few days and I’m still finding manuals I have to read.” In a few short years Salthouse has earned itself a place at the tip of the cutting edge of boat builders. Madam Rouge, like all Salthouse boats, is constructed of end-core balsa sheathed each side with fibreglass. The outer sheathing includes three layers of Vinylester to negate osmosis. The end result is a tough hull somewhere around 25 tonnes.

All Salthouse hulls and decks are built to Lloyd’s standards and this makes the boats readily adaptable to any other survey requirements anywhere in the world. It doesn’t matter where we poke our ever-inquisitive noses the craftsmanship of Madam Rouge is faultless. This includes the engine room, where the d?cor may not be quite as upmarket as upstairs, but the same standards are maintained.

This boat also features Salthouse’s special exhaust system where a pair of skegs, mounted on the hull’s bottom, feed the exhausts into a low water pressure vortice. At speed the skeg’s shape sucks the exhaust gases away into the wake.

It’s not a new idea, but the exhaust surfacing about 3m behind the boat, does quieten the bellowing diesels remarkably well. During extended cruising there’s none of the usual deposit of black soot on the transom and the skegs help the boat track better in a following sea.

Salthouse boats are also semi custom-built. The interior design is flexible within obvious structural parameters. The Salthouse design team offer seven basic configurations for the Sovereign 60 – Madam Rouge’s official model designation – then work along with the client to give them what they want inside these parameters. This boat has an aft galley, plus a head and shower accessible from the cockpit.

There are many commonsense touches on this boat, but one that really impresses us is the slide-down window set into the bulkhead between galley and cockpit. It makes a convenient servery that will get plenty of use when entertaining onboard.

On the opposite side of the aft entryway there’s an icemaker. The cockpit toilet and shower door is just outside, so guests need never enter the main saloon in search of ice, or the loo, traipsing saltwater across the carpets after a swim.

But this boat is built for entertaining so cleaning up after a party is made easy by the central vacuum cleaner system and stainless steel bench tops in the galley.

Moving from the saloon aft, the cockpit deck steps down to a lower transom platform, which is also surfaced in matching teak. If still in a party mood, this is in effect a second level for open-air entertaining. There’s a rail around the open sides of for safety.

From the transom platform/lower aft deck, we step up through a central opening in the transom to the cockpit proper where James tells us a game chair will soon be installed.

At the cockpit’s forward bulkhead, under the servery window is a settee beside a bait and tackle rigging station – the owners obviously intend to do a spot of fishing – there’s even storage in the cockpit for ready rigged rods.

There’s no ladder, not even the circular stairway from cockpit to flybridge, normally associated with this style of craft. Here bridge access is via a semi-circular stairwell inside the saloon. Topside the air-conditioned bridge is so spacious it’s sure to be a popular spot. Behind a big flybridge lounge the skipper is well catered for at a massive island helm station, with an instrument panel that would do any jumbo jet proud. Sited centrally in pride of place is the monitor for the onboard computer system, controlled by a ball-type mouse in the starboard arm of a helm chair.

On each side of the computer monitor is a matched pair of CRT screens reading out from interfaced Raymarine radar, chartplotter and autopilot. Other toys, such as forward seeking sonar and cameras overlooking the cockpit and engine room are less apparent.

Madam Rouge’s skipper doesn’t have to leave his seat to keep an eye on goings on aboard. And loudspeakers ensure his commands reach the cockpit and the dock while mooring.

Action in the cockpit – we assume fishing action – can be recorded on CD ROM and emailed anywhere in the world.

Outboard communications include HF and VHF radio, ship’s telephone, a satellite phone link and of course the now essential internet connection. Most of this gear is mounted in a communication console that’s sited beside a small sink and bar fridge set against the port side of the bridge.

Drink holders decorate the top of the helm station and if you’re observant you may notice the night-vision scopes holstered nearby.

Moving downstairs again we can’t pass the galley without mentioning the linen pattern pressed into those practical stainless steel bench tops. We’ve eaten in some upmarket restaurants with kitchens smaller than the Madam Rouge galley.

There’s also a stylish bar underneath the main entertainment centre, but its contents remain hidden away behind the timber panelling until required.

Going forward passing an expansive saloon lounge that converts into a dining area, we take the companionway down to the third level sleeping accommodations.

Madam Rouge’s owners opted for a spacious master suite right in the bow with a double bed cabin to port and a double-decker pair of single berths in the smaller cabin to starboard. Like the main saloon there are acres of cherry wood panelling and storage in each of these luxurious staterooms.

There are two ensuites, one each side of the companionway, with semi-circular acrylic shower screens that keep water in the shower, not spraying all around the head.

Freshwater is also not a problem for Madam Rouge, because she’s fitted with a Sea Recovery water maker capable of producing 800 gallons of freshwater per hour. That should be able to keep up with demand for hot showers when the boat’s on charter.

What else can we say about Madam Rouge? She’s luxurious and opulent, yet still a practical long-range cruiser, just as much at home in a Gold Coast marina as she’ll be trolling the waters wide of Lizard Island. She may not be set-up to handle granders like the boats that will surround her up north, but her owners, or those on charter, will certainly be able to fish in style. Fishing and entertaining dance cheek to cheek on this Kiwi glamour.

To park a boat like this at the marina will set you back around $2 million.

Engine Room
The Salthouse Sovereign 60 Madam Rouge is powered by twin 660hp Caterpillar 3196 diesel engines driving through Twin Disc gearboxes. The propellers are Henley Equipoise and according to Salthouse Marine give the boat a top speed of 28 knots.

There is plenty of room around the motors in the heavily insulated engine room for the crew to carry out daily maintenance and regular servicing. The engine room also houses a 240V Onan 17 KVA genset and the Ocean Air air-conditioning unit. These can also be access and serviced easily. Twin screws make manoeuvring around the marina simple, but the inclusion of a bow thruster definitely makes life a lot easier.