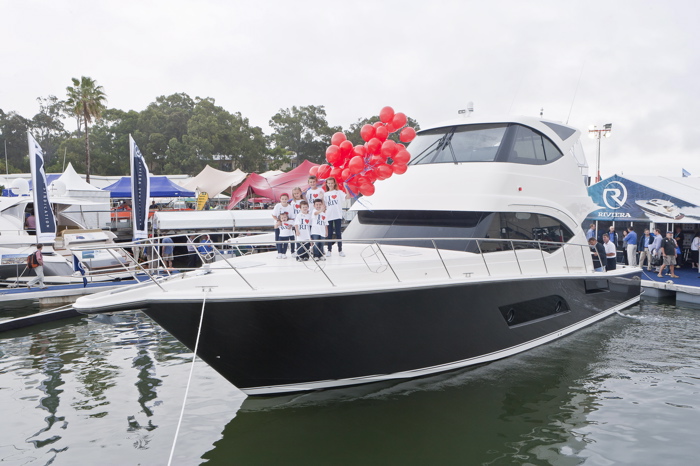 International exhibitors have claimed the quality of prospective buyers at the 23rd Sanctuary Cove International Boat Show was the best they have seen in 10 years.

Mulpha Executive General Manager Alison Quinn said the strong support for this year’s Show has buoyed us as we plan forward for next year’s Show leading to the quarter century celebration in 2013.

“The feedback from exhibitors underpins this Show as a ‘must attend’ event for the marine industry.”

Grand Banks Singapore dealer James Purves, who has been coming to the Show for a decade, was impressed by the quality of the visitors.

At close of business, confirmed sales included two multi-million dollar Princess motor yachts – a 72 sold to a Sydney buyer and a 52 to a Gold Coast buyer.  The total value of the sale was around $A7 million.

Mark Richards who manufactures Palm Beach Motor Yachts reported the sale of two of the just-released 52s to current Palm Beach buyers who have upgraded to the new model.

Further positive comments from the 384 exhibitors included Riviera’s Stephen Milne who said: “We have had a fantastic show, we sold 10 boats which have a retail value of some $A15 million ranging in size from a number of 43 Flybridges, a 5000 Sports Yacht, two 5800 Sport Yachts and three of the brand-new 53 Flybridge model,” released in a world launch at Sanctuary Cove.

Mr Milne added he had three full days of sea trials next week and he was confident the company would exceed last year’s sales. He added sales were made to buyers in Sydney, Adelaide, South Africa, New Zealand and Puerto Rico.

“We are exceedingly happy about this year’s Show and we are cracking the champagne.”

Brett Flanagan reported the sale of two 350 Integrity Pilothouse boats – one to a walk-in couple who paid for the boat on the spot.

“We have never really sold a boat at a show before this Show, and we have six or seven sea trials booked for next week,” he said.

Ensign Ship Brokers also reported a walk-in sale on the first day of the Show with a firm order for a Beneteau Oceanis 40.

According to Clipper Motoryachts Australian Managing Director Brett Thurley, the past eight weeks have been the strongest for the company in new boat sales since taking over Australian distribution two years ago.

“We have commitments on three boats at the Show already and the strong ongoing interest will give us a lot of work to do in the weeks after the Show.”

Flying Fish Hovercraft sold three hovercraft at the Show. “I have to say the quality of the enquiries is exceptional,” said the company’s Emma Pullen.

“The big news for us is that a visitor to the Show from New Zealand is considering the purchase of 10 craft for an events business and has departed the Show for an immediate demonstration at our own events business in Caboolture – that would be a very significant sale for us in expanding the HoverCross brand internationally,” she said.

Julie Balzano from Enterprise Florida in the US managed a delegation of Florida companies exhibiting at the Show for the first time. “The overall consensus has been very positive,” she commented.

One of the five manufacturers was Florida company, Armstrong Nautical Products. Vice President Russ Sedlack said there were a lot of discerning customers at the Show.

“We don’t normally sell off the stand but people insisted they buy our product off the stand,” said Mr Sedlack. The centre pole telescopic boarding ladders and ladders for RIBs proved popular. He answered inquiries from international visitors from Fiji, Papua New Guinea, Canada, Japan and China.

“We are very optimistic to build business here and we have found the boat builders to be very open-minded and open to discuss business.”

American company Westport Shipyard was at the Show in the Superyacht Australia pavilion. The company came to Sanctuary Cove for the first time as it has clients in Australia owning a 34m and 40m vessel. The company builds composite motoryachts and claims to be the largest yacht builder in North America.

“It is the first time at the Show…. We also do Abu Dhabi, Dubai, Singapore, Cannes and Monaco. We consider this a very good venue for international audiences,” said Vice President Philip Purcell.

“We had many positive leads. Every Show has been the same – the volume of visitors is down but the quality is superior.”

“The strength of the Australian dollar has driven interest. We find we are very well received. Sanctuary Cove to us is a ‘go to’ venue,” said Mr Druek.

“Interest in the larger Seawinds – the 1160 and flagship 1250 and the Corsair C37 that debuted at this Show is also strong and we anticipate sales in the days after the Show,” he said.

“The Mustang 32 sold well as expected,” said Mr Durman. The Show also saw the unveiling of a Mustang 50, which proved to be a real surprise package to the Mustang brand loyalists.

Australasian Marine Imports also had a successful show, with the sale of a Hampton 680 Endurance and an Alaskan 57 Pilothouse along with an Alaska 46 Flybridge which are built in China.