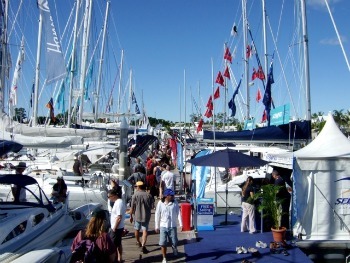 A world record attempt, marine seminars and VIP packages are some of the plans announced for the 2011 Sanctuary Cove International Boat Show at an official launch.

Sanctuary Cove General Manager Events and Marketing, Sue Thomson, confirmed a range of initiatives for the 23rd annual Show planned for Thursday, May 19 to Sunday, May 22 at Sanctuary Cove in Queensland, Australia.

“For the first time, Sanctuary Cove welcomes Marine Queensland as host to a daily schedule of fishing and marine talks and seminars,” she said. Industry and angling experts will present talks and educational sessions on topics encompassing fishing, boat maintenance, trailer boat operation and wider issues in the marine sector. These will be staged at the Marine Village Theatre and in a second venue within the waterfront Marine Village.

In another first, Queensland Surf Lifesaver, Andrew Abrahams, will attempt to break the World Record of one million metres in a rowing machine over five and a half days. His efforts will support the Starlight Foundation, a children’s charity. The Show appearance is a lead-up to his December 2011 marathon attempt to row solo across the Atlantic Ocean, a distance of some 2700nm (5000km).

“These initiatives along with the introduction of VIP packages will add further interest for visitors to the Show,” said Ms Thomson.  VIP packages introduced in 2011 will include five-star accommodation, helicopter transfers, boat show entry and a partner pampering package per couple.

“For the serious marine buyer, the Show will continue to attract government delegations and marine businesses eager to see a huge array of marine products and services. “

As at mid-February, the Show had attracted more than 280 confirmed exhibitors and more than 20 world and Australian marine product releases.

“Sanctuary Cove is on track to reach its traditional large exhibitor tally of more than 400 national and international exhibitors with more than 100 product launches,” said Ms Thomson.

Immediately preceding the Show, Superyacht Australia will stage the first-ever Australian Superyacht and Marine Export Conference on the Gold Coast on May 17 and 18. The conference will provide an overview of key global markets and in particular how Australia, New Zealand, Asia and the Pacific can work together to drive more business for the region.

Australian releases at Sanctuary Cove include exhibitor Northside Marine’s showcase of the Malibu Wakesetter VTX, the Malibu Response Lxi and the Axis A22.

In the sailing sector, Hunter Yachts is debuting the Hunter e36 in the Australian market; Seawind will launch in Australia its new Corsair brand with the release of the C37 trimaran; and Team Windcraft displays the Hanse 355 in a national debut.

A comprehensive range of marine products and services are also displayed at the Show with electronics, engines, navigational and safety gear and superyacht services.

Icom Australia is releasing its MA-500TR Class B Automatic Identification System (AIS) Transponder and IC-M412 Marine VHF Transceiver, while R.W.B. Marine is showcasing a range of Plastimo products including compasses and water tanks.

“The MarineBusiness-World.com pavilion is fully booked and the Superyacht Australia Pavilion is around 75 per cent booked out,” said Ms Thomson. “On-water and hardstand display bookings are still going strong.”

Club Marine is a confirmed sponsor for the 2011 event. Media partners include BoatPoint.com.au, Channel 7, 4KQ, Trade a Boat and 92.5 Gold FM. Maritime Safety Queensland is a government supporter.

As in past years, visitor tickets can be purchased on line. Online ticket prices are $A22 one day adult; $A19 one day concession; $A40 two-day adult and $A75 four-day adult. Children 14 years and under have free entry. See the website for full terms. Australian Marine Industry Breakfast and VIP package tickets will be available in March.

The $A2 billion Sanctuary Cove, located on the northern Gold Coast, is Australia’s leading and most successful master-planned community. Sanctuary Cove was acquired by current owners Mulpha Sanctuary Cove (Developments) Pty Limited in 2002.

MSCD, an arm of Mulpha Australia Limited, which is a subsidiary of Malaysian listed Mulpha International BHD, has invested significantly in Sanctuary Cove over recent years, resulting in a major transformation designed to ensure the pre-eminent community remains at the forefront of masterplanned living in Australia.