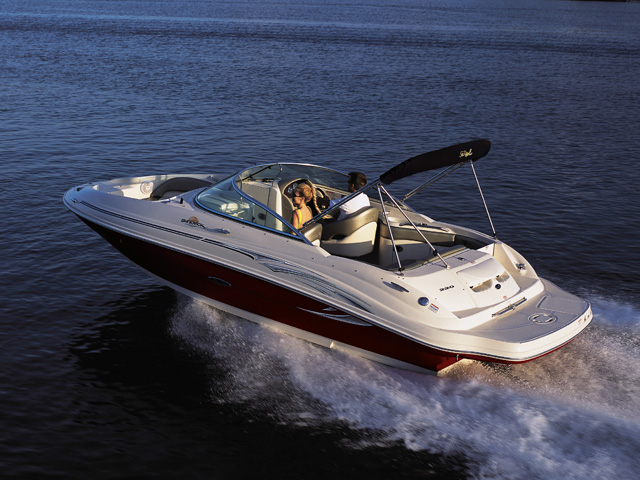 The first thing that struck me about the Sea Ray Sundeck 220 was that this open bowrider has enough seating for 10 people. And with that many people in one hefty American harbour boat, it’s a licence to have fun. But there’s another side to this excitement machine, because the way Sea Ray have put this 22ft package together, your friends will be wanting to come back for more.

The Sundeck 220 is crammed full of a whole a range of extras and comfort features, so everybody on board gets looked after. There is a bow and stern ladder, nine drink holders, the driver shall remain sober, forward and aft Eskys, enclosed head, a wetbar and a large swim platform.

Then, if straightforward cruising isn’t exciting enough for you, hook yourself up to the optional wakeboarding tower. It’s the highest I’ve seen on any rig and sure to get you up there with the best. Plus, with the boat loaded up with 10 people, make that nine, because you’ll be in the water, the wake would be hefty, so combined with that high tower you should get plenty of air.

Under the hood is a 260hp MerCruiser that packs enough grunt to spin a 22″ prop out to 5000rpm. This produced a top speed of 43 knots with two adults onboard.

However, even with a full load onboard, it might take a bit longer to wind up, but she will still hit some impressive speeds.

Andrew Short from Sydney-based Andrew Short Marine was the Modern Boating team’s host for the day. He was quick to point out that Sea Ray is one of the top-of-the-line brands in the US-based Brunswick Corporation’s stable. Other Brunswick brands include Bayliner, Maxum, Boston Whaler and Mercury Marine. The build quality, features and standard of finish of these craft are second to none and is typified by the range of little extras you find scattered about the boat.

Some of those little extras include the gas-assisted hatches on storage lockers and engine hatches and lighting in areas that you don’t expect, like the under helm storage area.

The Sundeck has an extremely well designed layout. You can use the concealed ladder to climb out of the water and onto the swim platform then, enter the aft cockpit via the starboard transom door.

Near this door is a pullout transom shower, so you can wash the sand off your feet before heading towards the small wetbar located behind the driver’s seat.

The wetbar was a bit of a surprise on a boat of this style, because first impressions are that the Sundeck is simply an open runabout. But I guess because she’s almost 24ft long, including the swim platform, there’s plenty of room for life’s little luxuries without impeding on her open-boat feel.

There is an L-shaped lounge in the aft of the cockpit that doubles as the engine cover. This also gives access to the battery and a storage area that was big enough to take all my camera gear.

The forward passenger’s lounge quickly converts to a sunlounge using the “high sitting-position” cushion supports, which are part of both the helm and passenger’s seat. The team agree that this set-up is one of the simplest and quickest methods of creating a sun lounge that we have seen.

But it was on the portside, forward of the passenger’s seat, that we found the biggest surprise and one for the ladies – an enclosed toilet. It had good lighting, extra storage and pump-out access for the waste.

I have been trying to convince a few close friends of the benefits of a bowrider as a harbour day boat, but they often retaliated with ” what about lockup storage, a head and sink ? ” But this bowrider has all these features, full marks to Sea Ray for ingenuity.

Speaking of storage, there is a locker in front of the helm that houses the CD stacker, an Esky and forward and aft cockpit tables.

Cleverly, the door to this locker can be opened and locked in place to block any wind and spray spilling from the bowrider into the rear cockpit area. It’s quite handy if there is a bit of slush about.

The bowrider cockpit of the Sundeck 220 is also packed with features. The first one that caught my attention was a ladder that folds out from the anchor well. It’s an excellent option, because there are many occasions when climbing aboard over the bow is desirable.

Under the bowrider’s floor is a locker designed to hold a wakeboard. This hatch also has a fitting to secure the forward table when swanning around at low speeds.

Other important features include a bimini top, bow cover and the aforementioned high and prominent alloy wakeboard tower.

The wood-look finish, stainless steel steering wheel and luxury padded helm seat makes this area quite a treat to be in. Little extras, like the horn and dash mounted CD/AM/FM stereo remote really tops things off.

Under power the Sundeck 220 produces pure head snapping fun. The hull planed quickly and was easy to drive.

Initially, the driving position felt a tad too low, but the adjustable cushion, that puts you in a comfortable semi-standing position for high speed driving in rough conditions, solves this problem.

During the test we spent most of the time with the seats set high and the locker door closed to block wind from the bowrider area rushing into the cockpit, but I would imagine at lower speeds, or in the wet, we would have had the seats set low.

With the hammer down it didn’t take long for the 260hp MPI MerCruiser to wind out to 5000rpm; producing a top speed of around 43 knots, which suggested that the 22″ prop was well suited to the rig. We found economical cruise speeds to be between 22.5 knots pulling 3000rpm and 33 knots at 4000rpm.

The hull was easy to trim and delivered a stable ride. Once behind the wheel I had no trouble adjusting her handling characteristics and felt confident about putting her through the ropes right from the word go.

In tight turns the Sea Ray 220 held a good line, but we had to keep an eye on the trim to ensure the sterndrive didn’t cavitate. Essentially, this was an extremely well balanced combo with a great top speed for a 22 footer. Plus, her 1905kg dry weight ensures good handling in most conditions.

At low speed when approaching the dock the Sundeck quickly transformed to a small runabout mode with manoeuvrability to match. At no time did it feel as though we were docking something with an overall length of almost 24ft.

Overall the 2002 model Sea Ray 220 Sundeck is a well thought out vessel packed full of great features. There were many things that grabbed our attention about this boat, from the quick conversion of the portside passenger’s seat into a sun lounge to the easy handling of the hull at speed.

There is no doubt that the imported Sea Ray 220 will please more than a few, with all her options and features. The boat as tested with her impressive wakeboard tower would cost $84,000 or around $89,000 on water with trailer ready to go.