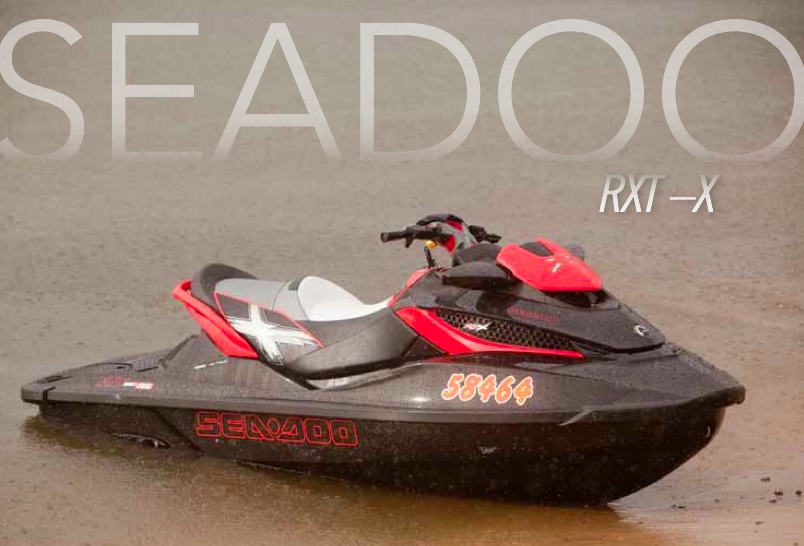 They might be vastly different watercraft, but these two SeaDoos excelled in the rough conditions.

The latest SeaDoo RXP-X handled the Long Reef froth and bubble with ease and the SeaDoo Speedster Wake makes short work of the offshore swells.

Dash lifts to reveal even more handy storage. The new handle bars are made from aluminium and replace the bulky plastic ones used previously. VTS ensures even novice riders a smooth ride. SeaDoo’s new diamond-plate foot-well grips make it a whole lot easier to stay attached to your craft. This, coupled with the latest upholstery used for the seat, ensures the rider and the PWC stay as one.

STOP PRESS: For all the PWC enthusiasts out there, the new SeaDoo RXP-X and RXT-X models have hit Australian shores with a bang, boasting a fresh colour scheme and an impressive 255hp under the hood (or under the seat, in this case).

Keen riders have been anticipating these latest releases from the personal watercraft powerhouse SeaDoo, following the raft of competitive launches in this category.

For this super test we organised to ride the SeaDoos from Bayview in Pittwater, on Sydney’s Northern Beaches, to Long Reef on the ocean side. We knew we could really give these craft a thorough workout. And Huey didn’t disappoint us by dishing up some very tricky conditions. We left the ramp at Rowland Reserve in relatively calm seas, which quickly progressed from a light north-easterly in the morning to a thumping 20 knot nor’easter for the return journey in the afternoon.

Heading up Pittwater I gave the SeaDoo RXT-X a good squirt with a simple but secure squeeze of the all-new trigger throttle and was instantly impressed with the power coming from the new Rotax engine. This beast has a top speed of around 70mph (all PWCs are governed to roughly this top-end speed), but it was this PWC’s acceleration that truly impressed the team.

From a standing start to 50mph takes only 2.5 seconds, which gives you an idea of this machine’s awesome acceleration. Even when cruising at 60mph the power and ‘hold on for dear life’ acceleration was still on tap right up to the top speed of 70mph. This thing takes off like Speedy Gonzales and it’s easy to see how a rider could get an ‘itchy trigger finger’ after a couple of rides.

In a following sea the RXT-X hull was predictable and rode the 2m swell effortlessly, often cruising just over the top of a lump and down the other side to give that weightless feeling I love so much. The upgraded VTS trim system gives a smooth ride and it’s surprising how much difference even a slight adjustment to the jet nozzle makes to the ride and nose angle of the craft.

I did manage to go through the back of some waves, but I am sure more conscientious use of the VTS system would alleviate this. The new system features a new  quick-tap function, which allows access to the top end and bottom end of the trim range instantly, which is crucial when cornering at high speed.

A PWC for two…or three

After picking up my pillion passenger for phase two of our test (the lovely Sophie Barnard from our office) we were off to rendezvous with a helicopter and Haines Hunter camera boat off Long Reef for the photo shoot. By this time the seas were fairly choppy and a significant wind swell had picked up, but it did not phase the RXT-X (designed for three people) and although I got wetter than I did on the ride down the coast, I must admit it was my mission to see if I could get Sophie to fall off the back before the test had finished.

Heading into wind chop at 30mph, with the helicopter and Haines Hunter close behind, would be tough on any craft but onboard the RXT-X it was fun and it rode the chop confidently.

New to the joys of riding a SeaDoo, Sophie almost strangled the breath out of me she was holding on so tight — but it stopped her from becoming shark bait. We even managed to get a bit of air under the RXT-X’s hull a few times amid the shrieks and screams.

After the last few shots on the beach it was time to mount up and set off back to Pittwater, head-first into that 20-knot nor’easter. The RXT-X handled the conditions well, cruising over, rather than through, the swell, again leaving the blue stuff and coming back down with all the finesse of a pelican landing on water before taking off again.

But my excitement was short lived and after 500m I quickly regretted the decision to ride back. It was not the craft that let me down but the other way around, because I quickly became so exhausted. I now know what it feels like to be a bug trying to hold onto the windscreen of a car doing a 110ks down the freeway!

The riding position on the 2008 models has not changed. It remains comfortable, but the seat has received new upholstery.  Even when thoroughly saturated, the seat covering seemed to offer less slip than previous models and, when combined with the new diamond plate foot-well grips, made riding a comfortable and precise experience even in rough water. Corner-to- corner performance was impressive and not once did we feel like unseen forces were trying to throw us off the craft.

The new styling and colour scheme of orange and grey is striking. This vessel’s abundant power and design are reminiscent of a quality sports car. Cosmetics aside, the major changes to the new models were in the engine bay and handle-bar construction. The latter’s design would not look out of place in an art gallery.

In the belly of this beast is the same supercharged, four-stroke, intercooled Rotax powerhouse used in the previous models, with one key exception — 255hp of heart-wrenching power.

The power is delivered via bigger fuel injectors, an upgraded supercharger that produces more boost pressure and a larger intercooler, which has been shifted inside the hull to provide a denser charge. The intake grate has also been enlarged and we certainly noticed the increased torque available to the rider throughout the entire power band.

More importantly, both the RXT-X and RXP-X feature the patented closed-loop cooling system, which has obvious benefits for saltwater users. No saltwater through the system means less corrosion over the long term. Reduced servicing is the obvious benefit.

BRP bills these models as ‘muscle craft’ and with their many race-ready features, we are inclined to agree with them. The bold appearance, blinding acceleration and race-bred technology used throughout, make a very attractive package for the adventurous and crazy alike.

For the second part of this SeaDoo super test we put the new 2008 SeaDoo Speedster Wake through its paces. This sports boat was designed as an alternative to standard inboard-powered wakeboarding boats. And she can hold her head high, because despite the less than ideal conditions during this test and the fact that we were running the Wake offshore, she handled well and the run down the coast was impressive. Admittedly it was a bit bouncy, but once we were back inside The Heads, on waters more suited to her design, she felt secure and had oodles of power.

Twin 215hp Rotax engines power the SeaDoo Speedster Wake. This quality 20-footer shares many of the features you’d find on any hardcore inboard boat designed specifically for wakeboarding, such as Perfect Pass, a 272kg water-ballast tank and a wake tower.

The ride offered by the twin jet-propulsion system is unique — resulting in a sprightly and exhilarating ride. In the right hands jet-powered boats can be plenty of fun, because they are not limited by the steering restrictions of a propeller driven boat.

For thrill seekers the Speedster Wake is capable of all manner of twists, turns and spins, but make sure you only carry out these tricks where it’s safe to do so.

The Speedster Wake seats seven — two in the bow, three on the rear lounge, plus the driver and observer. With that many people onboard it would be a bit squeezy, but her handling isn’t impaired. But if you use the boat for her intended purpose, wakeboarding, you could always throw someone out (with a tow rope of course).

The twin 215hp engines (430hp combined) have more than enough grunt to pull a boarder or skier out of the water with ease and the strategic placement of the twin jet nozzles doesn’t affect the wake. Unfortunately, our test schedule left us with limited time and we were unable to have a ride behind this beast.

The standard features list is lengthy and includes an AM/FM stereo, wake tower, tower speakers and the wakeboarding kit, which includes Perfect Pass control, wakeboard racks and ballast tank. There’s even a PA, so you can yell at your mates out the back while they’re boarding.

Being a jet unit, the safety factor cannot be under valued and the comfort of not having to worry about spinning props will be a ‘tick in the box’ for boating families.

Jet-powered craft are fun and the SeaDoo Speedster Wake is no exception. Storage is extensive, the fun factor extreme and her versatility impressive.

The Modern Boating team was impressed with BRP’s 2008 models and we can’t wait to test the bigger 230 Wake. But next time we’ll make sure we get a ride at the beginning of the test rather than run out of time at the end.