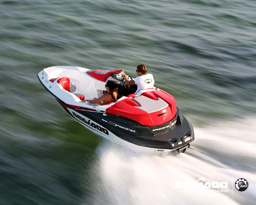 Anyone feel like some pure, unadulterated fun from a boat that can throw a massive 'boarding wake? Then check out these new SeaDoos!

The Australian love of water is almost legendary all around the world and why wouldn't we love it? Australia is the biggest island on the globe with more than 70,000km of coastline and 80 per cent of its population living by the sea.
Here it's all about lifestyle and boats play a big part in that lifestyle.

That old saying "a family that plays together, stays together" is certainly true. Recreational boating in this country has long been a true family affair, especially when you look at sports such as waterskiing and now wakeboarding. Many Aussie families have spent countless hours skiing on the Hawkesbury River and Hume Weir in NSW, or Lake Eildon in Victoria, just to name a few.

The old scenario was that dad and mum bought the boat and the kids got to ski and ride behind it. This trend is changing, especially on the wakeboarding scene, where groups of young friends are pooling their funds to buy a wake boat they can all share.

With the diversity of watersports available, most families will be looking for a boat that can multi-task. Now there's a bit of modern jargon that gets totted around a lot ? but the new SeaDoo jet boats genuinely live up to the description.

Anyone who has driven or ridden in a jet boat will attest to the fun that can be had just driving around, dropping doughnuts and experiencing the G-forces these boats can pull when they're thrown into a 360-degree spin. Plus, there's the added advantage of a jet being able to run in extremely shallow water without having to worry about dinging the prop.

But when you combine these attributes in a vessel that can 'wall-up' a massive wake, tow skiers along at more than 40mph, zip around in just over a foot of water and take seven adults along for the ride, you're looking at the quintessential all-round boat.

The 2007 SeaDoo Speedster Wake breaks new ground in wake boats, because not only can it pull off all the standard jet boat tricks, but flood her cockpit-controlled ballast tanks with an extra 272kg of water and she throws a top boarding wake.

But under normal circumstances, especially when children are still learning the ropes, there's no need to fill her ballast to achieve a reasonable wake. This is because the twin, aft-mounted, Rotax 4-TEC, Supercharged, Intercooled, 215hp (430hp all up), four-stroke engines' jet nozzles are quite close together and virtually work as one unit to create a good wake and a top speed of 55mph.

The Speedster Wake is 19ft 9in and has an 8ft beam, which means she's almost half as wide as she is long, which further enhances the wake. Her dry weight is only 1340kg, so for a 20-footer she's not too heavy to tow. But add another 170kg for fuel and freshwater, 272kg of ballast and around 700kg for passengers and gear, and this boat has a displacement of more than 2.6 tonnes, so no wonder the wake's big.

The Wake's hull has a 20-degree deadrise near the bow, so it slices through chop cleanly, but it flattens out from under the driver's seat to the transom. The result is a straight tracking hull that responds instantly to directional changes of the jet venturi, which is why the hull can easily spin within its own length.

As far as wake boats go, the available cockpit space is reduced slightly by the size of the swim platform, which is integrated into the hull and the twin storage bins above the engines. These bins have padded hatches that close to form a large sun pad. So, yes, it's a slight loss, but it's still usable space. Plenty of room remains in the main cockpit and forward bowrider to seat six adults in comfort, while the seventh person rides behind.Layout

The layout of the Speedster Wake is fairly typical of most modern bowriders, but there's no windscreen as such. Individual race boat-style screens protect the driver and observer. These do a surprisingly good job of redirecting the slipstream up and over the heads of those seated on the rear lounge. The bowrider will seat two adults comfortably, while three can sit on the transom lounge without too much trouble.

There's a wake/ski underfloor locker between the driver's and navigators seats, grab handles and drink holders for all passengers and a stylish wakeboarding tower with board racks.

For the driver, the instrumentation for the twin-engine installation is comprehensive. The boat features a Perfect Pass cruise-control system and a Clarion AM/FM CD Stereo. This not only pumps music into the boat through four speakers, but blasts the sound out to the rider through large marine speakers mounted on the tower.

There's also a loud hailer that uses these speakers, so voice commands can be conveyed to anyone on the water behind the boat.

Built-in ice box, cockpit carpet, bimini top (optional), six stainless steel cleats, a 12V jack, horn, navigations lights and twin boarding ladders, this boat has everything you'll require for a fun family day on the water ? even if you're not into boarding.

At only 15ft, you'd hardly call the 150 Speedster a big boat, but in jet boat terms, she's big on performance, handling and exhilaration. The 150 also offers Rotax power, this time in the form of a single supercharged 215hp unit that propels the boat to a top speed of 45mph.

This smaller boat seats four adults and is also fitted with a wakeboarding tower. While the 150 throws a wake that's quite suitable for recreational boarders and water toy riders, this boat is more suited to the thrill seeker. Mum, dad and the kids will have a ball zipping around in the 150, but like the jet boat rides on Sydney Harbour, once you start throwing it into those high speed 360-degree spins, be prepared to get wet? it's all part of the fun.

The boat's handling and performance are exemplary. Its helm is light and super responsive, making this boat extremely manoeuvrable at both high and low speed. It also boasts a high freeboard, so mum and the kids won't have to worry about being thrown out when dad throws yet an another unannounced doughnut at high speed when no one's hanging on.

Basically, this boat has many of the features of its 20-foot sister, but in a more compact unit.

Both the Speedster Wake and the 150 Speedster were designed as all-round fun machines and they fill the roles admirably. But don't be fooled into thinking that the Speedster Wake isn't a top wakeboarding boat. Many riders will be surprised at the size of wake she can wall-up.

If you're after pure, unadulterated fun, fire up the 150 Speedster.