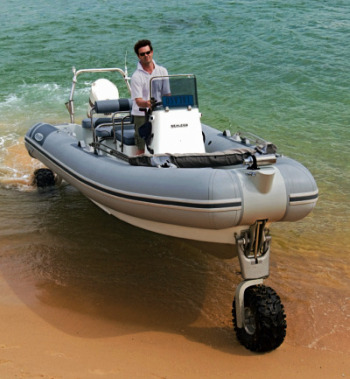 Sealegs 7.1m inflatable boats use patented amphibious technology that allows them to go directly from land into the sea.  The retractable wheels provide easy access to the water.  There is no other recreational boat like it.

With a capacity to seat eight adults, the over-engineered marine hydraulic system removes maintenance concerns for boat owners. The Sealegs is a real head-turner on the water AND on land with plenty of power.  Options include upgrading to a 150hp engine, bimini cover, drive-on drive-off trailer, swim ladder, electric anchor winch and a range of marine electronics.

Nice legs have been a head-turner ever since the first caveman threw a cavewoman over his shoulder. And boy did we attract some stares as the new Sealegs 7.1m RIB ‘amphibious marine craft’ emerged from the water driving onto a Sydney beach. For those who haven’t seen the Sealegs technology in the existing 6.1m RIB and 6.1m D-Tube, it’s a boat with wheels and a fine example of a concept that is growing in popularity the more boaters think about the benefits.

Where the Sealegs shines above other entries into the amphibious craft market is that it is a genuine boat with the added ability of driving on land—it’s not a car that floats. This is an important distinction because if you have use for an amphibious craft—and don’t discount the idea before reading about the possibilities further on—comfort and safety are more critical at sea and not worth sacrificing for speed over land.

The Sealegs 7.1 RIB is a rigid inflatable boat that combines a 4mm aluminium hull sporting a 21° deadrise with a topside constructed from six chamber Hypalon 828 inflatable tubes. The hull performance exceeded my expectations and I returned to the office impressed.

The Modern Boating test was conducted during a windy afternoon on Sydney Harbour. By coincidence, Sealegs’s Sales Manager Ben O’Connor and I were both wearing white shirts and I thought we might appear to be contestants in a two-man wet t-shirt competition by the time we were to drive up the beach of our destination. However, the 7.1m centre console rocketed across the Harbour without throwing any water on us. We did get wet later on that afternoon when I was driving loops in a wind stronger than 20 knots, but that’s to be expected on any centre console.

The test boat was powered by a 150hp Evinrude E-TEC and the speed was so impressive that I felt the skin on my face stretching from the force of the air—but the speed bumps were negotiated softly by the sharp entry of the hull. Nobody could be disappointed with this boat’s ride, so let’s just move on to the contraption that inspired questions from bystanders everywhere we travelled that afternoon.

Do You Sea legs?

I never thought I would quote ZZ Top in a boat test, or at any time for that matter, but “she’s got legs, she knows how to use them”. The two rear wheels and single forward wheel all remain raised above water level during transit and are lowered into the water by marinised hydraulic cylinders that are operated from the helm. They can be left at variable heights throughout the lift range and a beep indicates when they are fully lowered. The thrust for the rear wheels is delivered by a 24hp Honda four-stroke motor, located under the centre seat. It starts easily with electronic ignition, makes a bit of noise and delivers enough power to move the 7.1m, 1100kg vessel to a maximum speed of about 10km/h over land. The boat’s steering controls both the outboard and the front wheel.

To drive onto land, the process involves leaving the outboard running to steer you towards your point of exit. Moving slowly allows you time to coordinate between the outboard trim and throttle, the Sealegs height controls and motor throttle. You leave the outboard running as the wheels grip terra firma—this gives you the option of a quick push from the outboard prop if the sand/mud is soft—and once you’re satisfied the wheels are moving the boat, you can cut the outboard, raise it if necessary and let the vessel’s terrestrial instincts take your adventure to a new level.

The first attempt will keep you on your toes while you become familiar with the order in which to operate all the controls, but even the most neurotic panic merchant will have it all sussed and be enjoying the experience after four or five goes. It’s fun.

The ride on land is utilitarian. The convenience of being able to drive up or down a boat ramp or beach and just keep on going is fantastic!

As Ben and I drove around one of Sydney’s beaches I couldn’t help but think how handy this would be for anyone who lived in the nearby houses. They could simply park the Sealegs in a shed out the back and drive into the water whenever they want. No excursions to the boat ramp. No need to own a troublesome trailer—or even a tow vehicle. With a Sealegs you could get away with driving a little hatchback—or even a bicycle—and still own a 7.1m centre console. A similar convenience could be enjoyed by anyone living in a beachside community, on an island, or anywhere close to water.

Another group of boaters who should raise an inquisitive eyebrow at the Sealegs is anyone who has to beach launch. This boat has a trailer as an option so you can tow it to your destination, park the car, lower the wheels, reverse off the trailer and drive straight into the ocean bow first. Too easy. This avoids soaking your car in seawater, plus many other unpleasantries involved with launching a boat
from the beach.

The drive-in option also offers some tactical advantages in places where boat ramp traffic is approaching ridiculous—such as Victoria’s Port Phillip Bay during snapper season or Queensland’s lake Awoonga during a full moon. Can you imagine the change in the glum faces at the back of the queue watching the Sealegs drive straight into the water nearby?

The range of uses for this vessel also extends to a great many tourism business possibilities. I can think of a few fishing charter operators who could use this boat to access spots locked at low tide. Sealegs also offers practical uses for many emergency service and rescue applications.

Sealegs On The Road?

I asked Ben if Sealegs is able to be registered for the road. At the time of publication, that is not possible. But the company is investigating vehicle classification options with government departments, so it may be possible in future.

The 10km/h maximum speed makes it unrealistic to expect to be able to drive it on the highway. You wouldn’t want to get stuck behind it. But I can’t see the harm in allowing these vehicles to meander down the streets of quiet communities on the way to the water.

I was interested to speak to Ben about the manufacturing standards required for this kind of equipment operating in a marine environment. He assured me the hydraulic cylinders that raise and lower the wheels are marinised sealed units and, like the entire Sealegs system, are completely over-engineered to tolerances that the boat’s weight and operating parameters could never trouble. This is a good move by the manufacturers, because it removes any maintenance concerns for owners.

Taking a seat is a good idea if the skipper is in a hurry. There is a grab rail on the console, which I was hanging onto as we zoomed across the harbour at about 80km/h and it felt strong despite slight movement under load, but for comfort’s sake, take a load off. And as is the case with many RIBs, the freeboard offered by the tubes is a fraction too low to be used for solid support when standing.

Storage is provided in the forward seat locker, the outboard well locker and in three deck lockers. Given the multi-purpose format of the boat, this provides enough space to store safety gear, drinks and food. But if you utilise the ski hoop with four rod holders and have skis, wakeboards, or catch long fish such as Spanish mackerel or kingfish, you’ll have to improvise the storage for those.

An 80l fuel tank is standard and services the outboard and wheels’ motor. A 100l auxiliary tank is an attractive option.

There is an options list that also includes a range of electronics, bimini top, drive-on drive- off trailer and an electric anchor winch.

As with the first amphibians that left the sea to venture onto land, you get the feeling that this technology might be the start of an evolution creating a link between ocean and terrestrial vehicles. Who knows where it will lead? One day you might be choosing between a casting platform and a bow lounge for the family car. 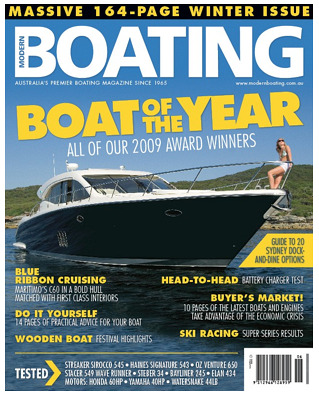